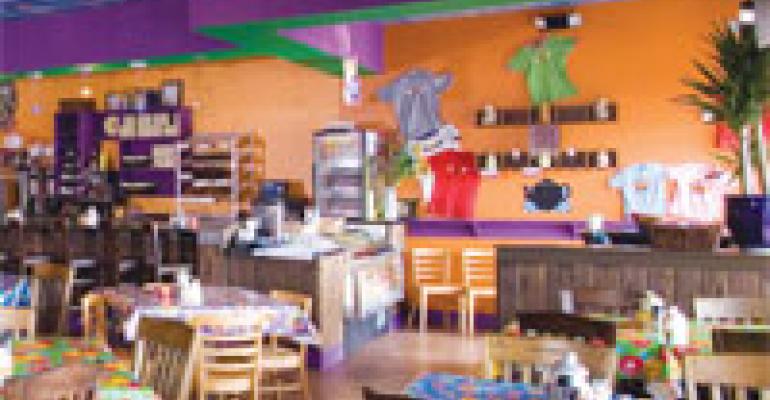 Delia Champion was just looking for a place that served a great breakfast all day when she hatched the idea for the Flying Biscuit Cafe.

Champion, who was waiting tables at Altanta’s Indigo Coastal Grille, eventually found some like-minded souls willing to back her dream, including Emily Saliers of the Indigo Girls. A crew of friends helped clean, paint, furnish, design the menu and staff the original 21-seat Flying Biscuit Cafe in Atlanta’s Candler Park in 1993. It was open for breakfast, lunch and dinner and served breakfast foods, along with small plates, Southern favorites, salads and sandwiches—most of them with a light, fluffy, warm biscuit on the side.

From the start, the place was a hit. Fans of the biscuits and the other eclectic from-scratch comfort foods lined up around the block. Local media flocked to the place, and the national media followed. Originally conceived as a neighborhood gathering spot, the Biscuit developed a cult-like following, with hungry patrons driving from Atlanta’s far-flung suburbs to get a taste.

By 2000, Champion was ready for a second location, which opened in the city’s midtown district and did even better numbers than the original cafe.

A few years ago, she starting giving some thought to taking the concept to the next level, but she recognized her limitations, too.

“I decided that the person who got two restaurants open in seven years was not the person to expand,” Champion recalled, so she brought a consultant in to look at the business and figure out the best way to make it grow. It became clear that partnering with a restaurant franchisor was the way to go. She talked to a number of suitors, eventually settling on Raving Brands, which also happens to be based in Atlanta. The multiunit operator and franchising company bought an interest in Flying Biscuit Cafe in 2006.

A key reason Champion liked Raving Brands, which has a portfolio of quirky concepts, is that it promised not to tinker too much with the Flying Biscuit philosophy. In return, Raving Brands has been working closely with Champion, tapping her institutional knowledge as the brand expands. “Having Delia continue to be involved is very important to us for a variety of reasons,” says Seth Salzman, a senior vice president at Raving Brands. “It’s a living, breathing thing, and she’s the heart of it.”

Building a Chain
So far this year, three franchises have opened. Two are in Atlanta suburbs, and the third recently opened in Charlotte, NC. The company anticipates it will have 10 franchises open by the end of 2008, all of them in the Southeastern U.S.

As one might expect, there is no standard design for a Flying Biscuit Cafe. Just as the first two were created from wildly different spaces—one, a century-old building in a funky residential neighborhood, the other, part of a brand-new glass-and-cement project in a business district—newer locations will take on different shapes and sizes. Salzman says it’s too early to tell exactly where the brand will thrive, but he expects it to work in a variety of sites and in urban and suburban markets. “The things that make a Flying Biscuit a Flying Biscuit are the tablecloths, the cute ceramics on the tables, and hopefully the food and the service,” Champion says.

“We don’t want people to think we just have this plug-and-play model that we put in storefronts,” Salzman says. At the same time, growing via franchising puts a lot of control of the concept into the hands of franchise partners, who may want to do things their way. One of Raving Brands’ responsibilities is to preserve the essence of the brand, which in this case is a bit unorthodox. “It’s very hard to have nuances to things when you’re trying to grow a brand,” Salzman says. “You have to have great systems and tools for franchisees and employees to be successful.”

So how do you transport the hand-painted biscuits with wings adorning one wall at the original Flying Biscuit Cafe to far-flung locations? Raving Brands, working with the artist who created the original look, developed customized wallpaper for the franchise locations. The bright tablecloths and ceramics have been transported, as has the mix of chair styles; walls are splashes of color and the ceiling tiles are painted in designs borrowed from the original restaurants.

Menus, now that they’re used at more locations, will still change to reflect current tastes, but not as frequently as they have in the past. And customer feedback, once channeled person-to-person through Champion’s visits to tables, is going high-tech; random guests will be asked to answer hand-held electronic surveys about food quality and their intent to return.

Who Wants Breakfast?
It’s hard to say how high Flying Biscuits can soar eventually, but breakfast is clearly a potential growth frontier. At the concept’s two original stores, despite their wildly different locations, 33 percent of business occurs in the morning, another 44 percent at lunch and the rest at dinner. And the combination of light meals and an eclectic vibe contribute to traffic throughout the day. Champion says it’s not unusual to have a wait midafternoon on a Saturday or Sunday.

Lots of places serve breakfast foods, some of them all day, but one of the ways Flying Biscuit has set itself apart from the pack, aside from the quirky interiors, is by what goes into those foods. Champion says people are drawn to the menu’s high-quality, “real” ingredients. Recipes use butter, not margarine; the sausage is supplied by an independent producer; seasonal ingredients are incorporated into specials when possible.

Another factor distinguishing Flying Biscuit from its chain competitors has been a community presence, something Champion started that Raving Brands hopes to foster among its franchise partners. The first two stores, she says, developed a following largely through word of mouth, and that’s expected to continue. In addition, she has tried to give back to the community when she can, something that might be hard to duplicate. “I drew a circle of a mile around the restaurant, and I said ‘if someone asks you for something, you find a way to do it.’” Salzman says a modest amount of advertising will promote the new stores, but the idea is for owners to spend time networking with local schools, churches and neighborhood groups. Accordingly, preopening friends-and-family training events will be encouraged.

As it happens, Flying Biscuit already has a little positive buzz even beyond the boundaries of Atlanta. “If you go to almost any hotel in downtown Atlanta and ask the concierge where you should go for breakfast or brunch, they’ll tell you to hop in a cab and go to Flying Biscuit, so a lot of people from out of town know the brand,” Salzman says. Those visitors, especially if they are from the Southeast, where Raving Brands will target initial expansion, are expected to form a new army of ambassadors for the concept.

Salzman says it’s too early to project how big Flying Biscuit could get, but he believes it’s the right product for a variety of markets. But the plan calls for slow and steady growth. “We’ve been very choosy about who our franchisees are,” he says. “We realize having the best possible franchisees is the key to success, especially in the early days. The last thing you want on the radar is a failure.”