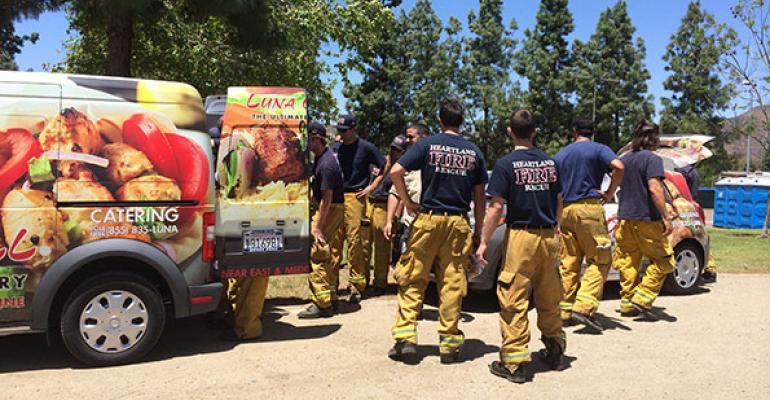 Stone Brewing Co., headquartered in Escondido, also was forced to evacuate from May 15-17. The top 20 U.S. brewery by sales volume posted a time-lapse video of the approaching wildfires to its social media accounts.

For Maria Pourteymour and many of her Luna Grill team members, the transition from normal daily operations to emergency community volunteers happened almost instantly.

The family-owned fast-casual restaurant chain with 11 locations in and around San Diego was put to the test in mid-May when wildfires swept through the area. Two stores were forced to close and evacuate, and others became meet-up spots with free beverages for local residents forced to evacuate their homes and watch the situation unfold on TV.

For Pourteymour and her husband, Sean, who opened their first Luna Grill in 2004, family was No. 1 priority. As fires bore down on their residential neighborhood, Maria picked her two kids up early from school, packed up the dogs and the valuables and left their home.

“It was just crazy that day,” she remembers. “We were basically surrounded by three fronts. In a drought situation, when we get those Santa Ana winds, anything that starts a fire has a propensity to spread.”

It took crews about six days to contain about a dozen separate Southern California wildfires in mid-May. In all, 176,000 notices of evacuation were sent throughout San Diego County via cell phone calls, e-mails, text messages and calls to homes and businesses.

Stone Brewing Co., headquartered in Escondido, also was forced to evacuate from May 15-17. The top 20 U.S. brewery by sales volume posted a time-lapse video of the approaching wildfires to its social media accounts:

When the first Luna Grill store received its evacuation notice and began clearing out, sending customers to safer nearby locations, gears shifted quickly for the Pourteymours and many Luna Grill team members. Suddenly it was clear how Luna Grill could provide safe hospitality and serve the community. The staff offered free drinks to residents who camped out at the safe stores and began loading up some trucks with food to feed the first responders.

“The first day it was, ‘These people need help, let’s go help them,” Pourteymour recalls. “After seeing the fires weren’t dying down, then it became a more highly organized effort with the cooperation of the fire department.”

Luna Grill caters events frequently, so much of the staff was prepared to step up and prep extra food to deliver to the front lines of the fires. Police and firefighters were extremely grateful to see the food trucks show up, Pourteymour says. They donated lamb and chicken kabobs, rice, salad, pita bread—“lots of good, healthy carbs,” she adds.

Luckily, both Stone Brewery and all Luna Grill locations were spared from the fires. Operations were only disrupted for a handful of days and normal operations soon resumed.

The Pourteymours’ home managed to remain unscathed as well.

“It was quite an amazing feat from our firefighters and the air units, Pourteymour says. “When you tour the neighborhood (in the aftermath) you realize these guys put their lives on the line.”

Pourteymour says some of the Luna Grill employees had fathers and brothers on the front lines fighting the fire.