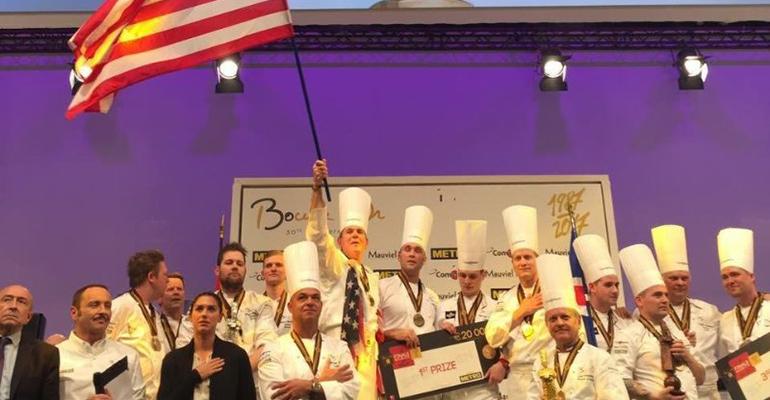 US wins gold at Bocuse d’Or for first time

The United States has won the Bocuse d’Or cooking competition for the first time.

The prestigious biennial competition in Lyon, France, pits teams of two chefs against each other in a five-and-half-hour cooking competition.

This year, Mathew Peters, executive sous chef at Per Se in New York City, and his commis, or assistant, Harrison Turone, who also works for Per Se, took top honors.

This is the second time in the 30-year-old competition that Team USA has even mounted the podium in the contest.

In 2015, the last time the Bocuse d’Or took place, Team USA, represented by Phillip Tessier and Skylar Stover of Per Se’s Yountville, Calif., sister restaurant The French Laundry, took the silver. Before then, the highest the U.S. had placed was sixth.

Competitors were required to prepare dishes of Bresse chicken and shellfish, along with two side dishes and an accompanying “vegetal” dish.

Norway, long a powerhouse at the Bocuse d’Or, came in second, and the bronze went to Iceland.

This year, 24 countries competed in the Bocuse d’Or. Team USA was supported by Ment’or, a foundation established in 2008 by French Laundry and Per Se owner Thomas Keller, New York-based chef and restaurateur Daniel Boulud, and Jérôme Bocuse, son of the legendary Paul Bocuse, who established the Bocuse d’Or in 1987.

Ment’or has worked to establish training and a broader support structure for Bocuse d’Or competitors from the United States.