/sites/all/themes/penton_subtheme_restaurant_hospitality/images/logos/footer.png
Recent
Recent
How a local grain became the star ingredient of the stand-out pita at Gavin Kaysen’s latest restaurant
Dec 01, 2022
Paul Qui brings his passion project to Denver
Nov 21, 2022
New on the Menu: Beer can Cubano and rice-stuffed mussels
Nov 18, 2022
Charles Mani is working to change the perception of Indian food at Urban Village Grill in Colorado
Nov 18, 2022
Nick Kokonas is stepping down from Squarespace-owned Tock
Nov 16, 2022
Featured
At Olivia Restaurant in Denver, travel is a perk
Oct 25, 2022
Savannah restaurateurs Mashama Bailey and Johno Morisano open two concepts in Austin
May 02, 2022
New on the Menu: Brown rice mousse, low-waste lobster and mackerel in fish sauce caramel
Jul 29, 2022
Former ThinkFoodGroup COO Hollis Silverman plots her own course with Eastern Point Collective
Oct 14, 2022
The RH Power List
brought to you by 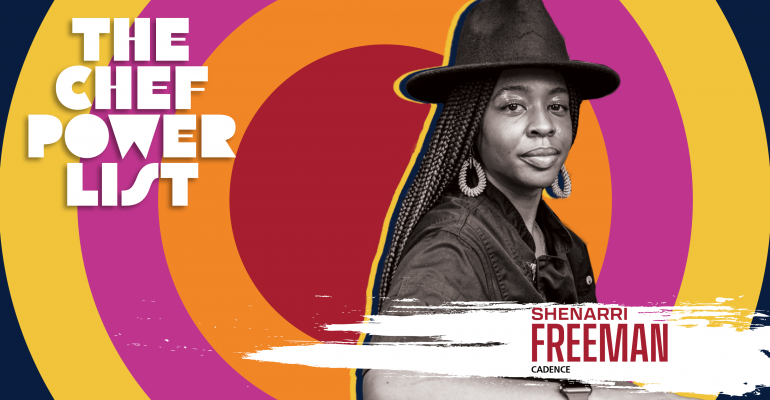 For years, vegan food has been proffered as something that’s good for you (though it’s not necessarily), and good for the planet (which it usually is), often with a large side of self-righteousness and flavor that’s distinctly lacking in soul.

Shenarri Freeman is changing that at Cadence, a restaurant in New York City serving stick-to-your-ribs meals of the soul food she grew up on in Richmond, Va., only without animal products or many highly processed ones.

“Flavor and texture are something that you can’t compromise with soul food. Soul food has to taste good. That’s the bottom line. It just has to taste good,” Freeman, whose nickname is “Greens,” recently told Restaurant Hospitality. “And it should be super filling. It should be made with love. You should feel like you’re back home at a cookout or in the middle of the summer.”

But Freeman sees no reason why that food shouldn’t also be healthful. She herself became a vegan in 2017 when she was working in Washington, D.C., and immediately noticed an improvement in her own health.

Now that she is running a kitchen for the first time, after graduating last year from the Institute of Culinary Education’s program in Health Supportive Culinary Arts, she’s working to show others how to eat more healthfully. And that’s not merely by serving vegan food, which can often be highly processed and not particularly healthful, but by reaching for alternatives such as maple syrup instead of sugar, and whole vegetables instead of plant-based meat analogs (although the Bolognese in her fried lasagna does contain Beyond Meat).

She does that with an all-organic menu serving items such as palm cakes — inspired by her mother’s salmon cakes but made with hearts of palm and chickpeas instead — in chipotle aïoli made with aquafaba instead of eggs, black-eyed-pea garlic pancakes with pickled mustard seeds and sage maple syrup, and smoked grits (derived from her grandmother’s recipe) with fried oyster mushrooms, tomatoes, rosemary butter and crispy garlic.

Freeman said the impulse to serve more healthful food comes from her childhood, surrounded by a loving family that worked to help and nourish each other.

Cadence is part of restaurateur Ravi DeRossi’s Overthrow Hospitality group, which operates bars and restaurants in Manhattan’s East Village that serve only vegan food and drinks, but that also has missions of community involvement and social justice.

As such, Freeman is also amplifying the voices of Black producers. Cadence’s small wine list only represents half a dozen wineries, but they’re all Black-owned.