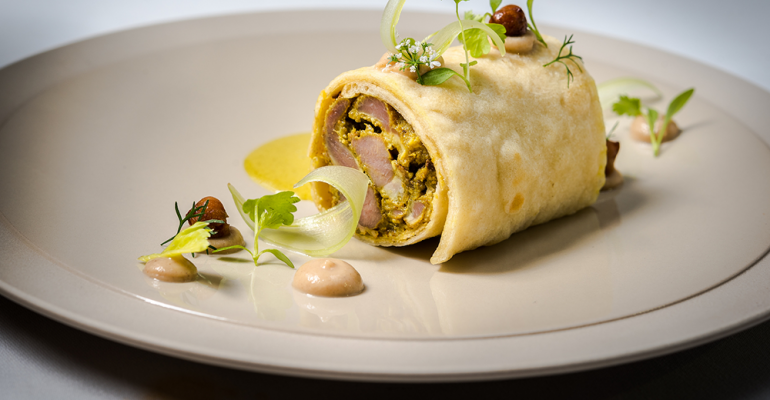 Kwame Onwuachi was an 11-year-old hooligan wannabe, growing up in the Bronx, N.Y.

“I was veering off on the wrong path, which was kind of easy to do, so my mother told me I was going for one month to Nigeria, and ended up leaving me there for two years until I learned respect,” he said.

There he faced teachers who beat him if he didn’t do his homework.

“If you didn’t do your homework a couple times and you were a tough guy, then you carried a cinderblock across the soccer field eight times, and if that didn’t work, then you had to dig your own height, which took … no one would ever complete that. You’d either cry from exhaustion or pass out and wake up and never do that again. 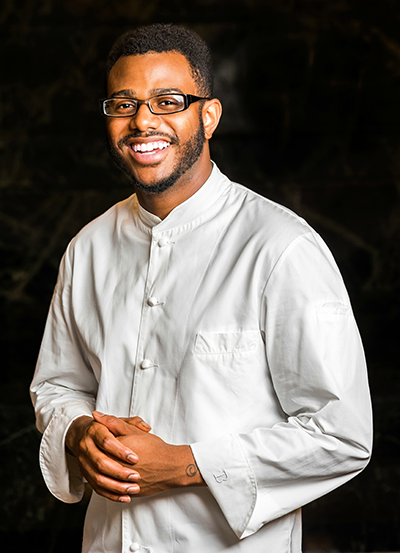 “So I learned really quickly to do my homework.”

It took him longer to learn to appreciate the food.

His first meal in Nigeria, served to him by his grandmother, was okra stew.

“My grandmother put a spoon down in the stew and lifted it up and a slime stream went all the way down. I didn’t want to eat that. Six months later, after my hunger strike, I finally ate the okra stew and loved it.”

Onwuachi said he came back to the Bronx as a 13-year-old hooligan wannabe, but he’d learned valuable lessons in Nigeria that would sink in later and set him up for success as a chef.

“As I got older and had to provide for myself, it taught me to really appreciate things like electricity, and how precious it was just to go to your tap and drink cold water,” he said.

“Getting a pack of jumbo party wings: We’d have had to raise 50 chickens to have a Super Bowl Sunday feast. I really thought about what I had here and what I could achieve. If I put my mind to it, I could pretty much do anything.”

“I wanted to cook the way that I cook for my friends and family. So you have jollof rice, you have oxtails, you have curry goat and roti, you have suya.” 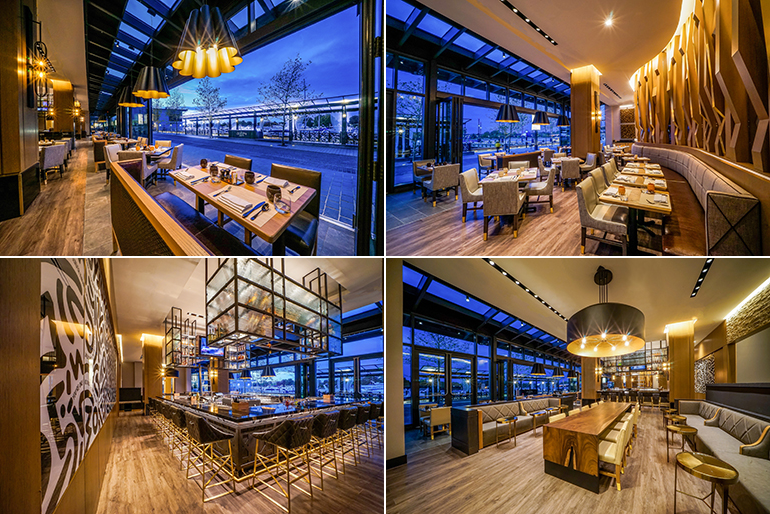 Kith & Kin is located in the Intercontinental Hotel in Washington, D.C.

Suya is a Nigerian dish of meat seasoned with alligator pepper, peanut powder, ginger powder, cayenne and other spices served with raw tomato and onions.

Being a chef trained at the Culinary Institute of America in Hyde Park, N.Y., and having cooked at such New York City fine-dining landmarks as Per Se and Eleven Madison Park, Onwuachi’s suya spice at Kith & Kin is in the braising liquid for wagyu short ribs, which he cools, presses, chars and serves with pickled pearl onion petals and, for a dipping sauce, shito honey.

Shito is a spicy sauce from Ghana to which Onwuachi adds Calabrian honey.

“My shining moment was to see something I grew up eating in a refined restaurant, and people dipping their hands in water, breaking off pieces of fufu, dipping it in stew and eating it,” he said.

Fufu is a gummy starch made of mashed cassava and plantains that’s a staple in much of West Africa, including Nigeria. At Kith & Kin it’s served with Obe Ata Dindin, the Igbo name for a red stew made with red bell peppers, tomato, tomato paste, red onions, ginger, garlic, fermented habaneros and toasted curry powder. Those ingredients are all fried in oil until “deeply caramelized,” as Onwuachi puts it. Then he braises chicken in it.

Cook rice in that stew, and you have jollof rice.

Onwuachi’s mom, apart from packing him off to Nigeria, also taught him how to cook. A chef herself with her own catering company, she put him to work peeling shrimp, stirring roux for gumbo and making jerk paste.

“It was fun,” Onwuachi said. “It grew into a passion which grew into a career. That’s why I’m sitting across from you in this room.”

Of course, it hasn’t been easy. In his memoir, “Notes from a Young Black Chef,” which he wrote with writer Joshua David Stein and which is slated to be published by the Knopf Doubleday Group in April, Onwuachi discusses the subtle racism that he faced in the fine-dining kitchens where he worked.

“Being called the N-word is the best thing in the world,” he said. “It’s like, ‘I know you’re a racist; your cards are on the table. I’m going to do my thing, you’re going to do your thing.’ But when it’s subtle and you don’t get moved up and you get talked over and you get passed on, that’s the worst kind of racism. That’s the tough part.” 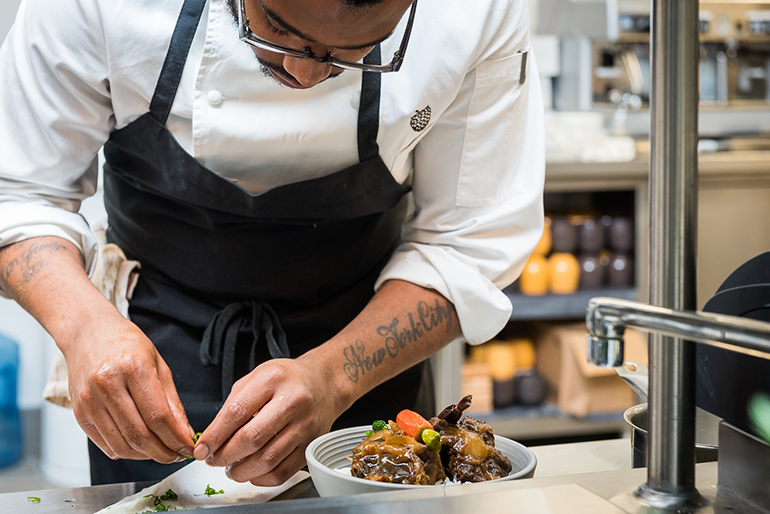 Onwuachi was on 'Top Chef' before become executive chef at Kith & Kin.

So he kept his head down, worked hard and developed the skills he needed. He ended up cooking around the world with restaurant pop-up company Dinner Lab, and then was a semifinalist on Season 13 of Bravo TV’s cooking competition series “Top Chef.” Although his first restaurant, The Shaw Bijou in D.C., failed to thrive, he was soon courted by Intercontinental, and Kith & Kin was born.

He’s still trying to figure out how to introduce West Africa’s more funky foods, like preserved fish and fermented cassava, to guests. And for that, too, he’s returning to his childhood lessons.

“One of my favorite dishes is banga stew,” he said. “You take the kernels from the palm tree and boil them until they’re soft, and beat them in a mortar and pestle. You pass that through a tami to get it smooth. You sauté ginger, onion, chiles, dried shrimp, stockfish and add the palm kernels and broth and reduce it down and eat fufu with that. It has a very pungent fishy taste, and half the people at Kith & Kin who tried it were like, ‘Oh my god, that is the best thing I’ve ever had,’ and the other half was like, ‘This smells weird.’

“I had to bring myself back to when I was a child and I was like, ‘I don’t want that. I don’t know what that is,’ and use the skills that I have as a chef to pick apart that dish, keep its integrity but still introduce people to West African or Caribbean cooking while maintaining its integrity.”

“I’m thinking out loud, but I’m going to do that when I get back,” he said. 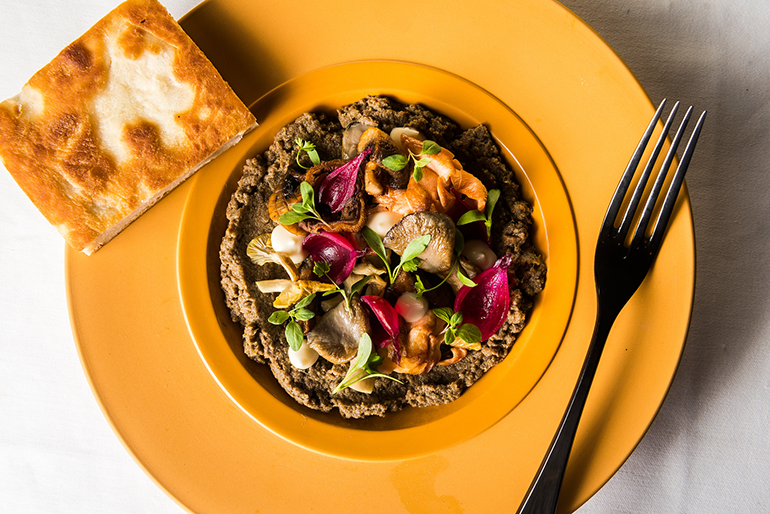