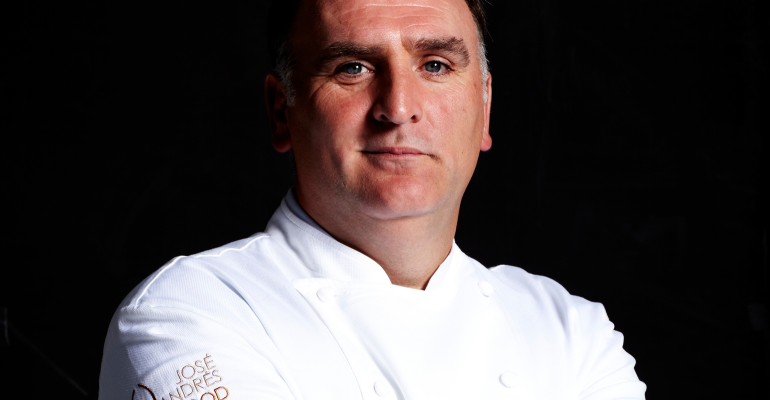 José Andrés is on a seafood kick.

The MGM location, on the other hand, specifically reflects the water around it.

“It’s on the doorsteps of the gateway to the Chesapeake Bay,” Andrés said. “So it’s obviously a thing that’s more of an Americana fish restaurant.”

Andrés and his development team of a dozen or so chefs will likely be busy over the next three years, since they recently announced a partnership with Compass Group USA to develop eateries in museums and stadiums. ThinkFoodGroup is also expanding its fast-casual, vegetable-forward concept Beefsteak, named after the tomato.

“Sometimes, maybe we see something we were not thinking of,” he said, adding that inspiration can come from anywhere.

“[It] can be a photo, can be a whisper, can be an idea, can be a trip,” he said. “Sometimes we look in [each others’] eyes in a conference and we put it on a list as something we need to do.”

Andrés has a long history of innovation. A friend of the avant-garde Catalonian chefs Ferran and Albert Adrià, he was an early adopter of the molecular gastronomy that the brothers developed at elBulli, their restaurant and laboratory in Roses, Spain.

Andrés drew inspiration from those techniques as early as the turn of this century, when at Jaleo, his tapas bar in Washington, D.C., he would freeze ginger-infused coconut milk into bite-sized pieces and wrap them in unflavored gelatin made from agar agar. When brought to room temperature, the dumplings burst in the mouth.

Later, at Minibar, he puréed potatoes mixed with olive oil, cream and butter, and squirted them out of a nitrous oxide canister to create an airy potato foam that he would top with thin slices of beef.

Minibar is now a full-blown restaurant, but at the time was a six-seat counter on the second floor of his Mexican restaurant, Café Atlantico, in Washington, D.C.

Andrés pointed out that such techniques were criticized as being unnatural.

“Nobody ever criticized Starbucks for using it [a nitrous oxide canister] to make whipped cream,” he said. “What is the problem with lightness? Instead of having to beat mousses with a stupid whisk all day, you have a machine that does the whisking for you 10 times better — healthier, safer, quicker, lighter, sometimes without the use of so much gelatin. Are you kidding me?”

Each of Andrés’ Bazaar restaurants has a different menu, all in festive settings reflecting multicultural cuisines. At his first, in Los Angeles, Andrés served his version of a Philly cheesesteak.

But the dish was actually born at Minibar, as a way to use leftover pita from another D.C. concept, Zaytinya, which served Eastern Mediterranean cuisine.

Andrés would take leftover “pillows” of pita, “and start filling them up with a very good chef-made Cheez Whiz, but warm, and a good onion purée. … Then we’d put Kobe beef on top, seared on the outside but raw on the inside. Very thinly sliced. Two, three bites.”

Inspired by the success of the dish, he created a miniature version of bagels and lox at Bazaar Mar.

“Cream cheese, bagel and lox, but in one bite is all the flavor of the cheese and the beautiful, smoky, but creamy and fatty texture of the salmon,” he said.

At Bazaar Meat, in Las Vegas, he serves a tiny pastrami sandwich with mustard and pickles.

“My version is very light,” he said. “One bite explodes in your mouth.”

But what about that chef-made Cheez Whiz?

After that, the process is simple: Start with “really a good, American cheddar type, and you can go the heavy cream route or the water route [melting the cheese with one or the other, or a combination], but in the end you make a very light cheese,” he said.

Aerate the melted cheese in a nitrous oxide canister, keep it in a warm water bath, and squirt it into a miniature roll with onion purée and beef.

At Bazaar Mar, Andrés draws inspiration from Spain for dishes such as Rossejat, a Catalonian dish of thin pasta cooked in a rich seafood stock.

“While it’s super-traditional, things are [only] traditional if you know they’re traditional,” he said. “We forget that when you see something for the first time, for you [it] can be super avant-garde.”

Andrés bucks tradition by serving it with live sea urchin on top.

“It brings a little complexity and is unique,” he said.

Although Fish by José Andrés is more traditional, he has set aside a six-seat “fry bar.”

“I only wanted it for me to play,” he said. “It honors, obviously, the tempura bars in Japan, but in the end I didn’t do it thinking so much that, but more of what the great frying places of Spain could become, and with the love of frying in America, too, I was like, let me do a frying place where I can fry piece by piece.”

“That’s something I’ve been doing for many years in my home during the summer,” Andrés said.

The lobster is dusted in flour and can be fried whole or in pieces, although the menu currently only offers it whole.

“It’s a great way to keep the juices in and get it crispy on the outside,” he said.