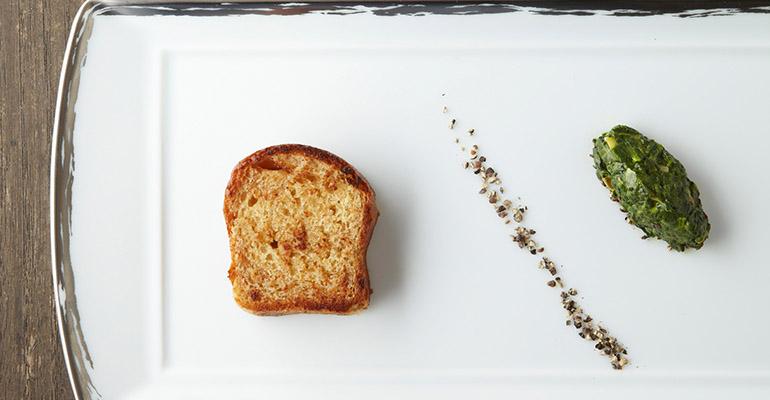 Dan Barber tries to feed the entire farm to his customers

Chef aims to make cover crops the star of the menu

Dan Barber is on a clover kick.

“We’re sautéing it like spinach, we’re making purées, we’re making sauce, we’re making broths. I’m doing everything with it because there’s so much of it,” says the chef-owner of Blue Hill restaurant in New York City and Blue Hill at Stone Barns in Pocantico Hills, N.Y.

Clover’s a big cover crop in the northeast, something farmers plant to replenish their soil so they can grow better cash crops.

Barber’s hoping to turn it into a cash crop itself, so that farmers can be encouraged to take better care of their soil and thus produce delicious vegetables and grains. As a chef, Barber says deliciousness is his ultimate goal. It just so happens that delicious food comes from healthy soil created by farming practices that are good for the environment.

Actually, to say Barber’s on a clover kick might be a little bit of a stretch. He says it’s delicious, like pea shoots, but more complex, “and sweeter if you get it at a certain time of year.” But the way Barber looks at food today is not about a single ingredient, but about the entire ecosystem of the farm.

“And it’s not the dish, it’s the meal. It’s looking at it as the totality of the food experience. That’s the ticket, and as a chef and as someone pursuing purchasing ingredients [it’s about] supporting the totality of a region or specific farming landscape.”

That means that to get good wheat, you shouldn’t just be buying a farmer’s wheat, but the tillage radishes she uses to loosen the soil and the buckwheat she plants because its root structure deters fungus growth. “That’s why in Japan, buckwheat into rice is a famous rotation, but the Japanese didn’t take the buckwheat and [make it into] dog food, like we do,” Barber said.

Instead, they grind it and make a delicacy: Soba noodles.

Tillage radish, which resembles and tastes similar to a daikon, has a role to play, too. “It drills way down and loosens the soil. It rots in the winter and all the microorganisms in the soil eat it, and then in the spring the soil’s clean.”

Barber has long been on the cutting edge of sustainable food sourcing. He named his first restaurant, Blue Hill in New York City, after his family’s own farm in Massachusetts and was already advocating from buying from local farmers when he opened it in 2000. That mission was underscored with the opening in 2004 of Blue Hill at Stone Barns, a working dairy farm and now an educational center and dining mecca.

His book The Third Plate, published in 2014, explores this broader approach both to sustainability and deliciousness.

He said that in researching the book, he found that the great cuisines of the world all evolved from regional ecologies that “dictated what needed to be grown, and of course the cuisines mimicked and encouraged that kind of agriculture.”

In the United States, however, European settlers found tremendously fertile soil that didn’t require the clever curation that had been developed over thousands of years elsewhere.

That is until a couple of centuries of intensive monoculture farming of tobacco, cotton and rice in the South depleted the soil, inspiring both westward expansion and what we now think of as Southern cuisines. “The slaves largely brought fertility back to the south through their cuisine,” Barber said. Dishes such as Hoppin’ John, or peas and rice, emerged after enslaved people from West Africa shared their understanding that soil where rice grew needed to be replenished by legumes, like peas, as well as other rotational crops, such as collard greens.

“Before 1820, there was no peas and rice,” Barber said. “It was all rice. Rice was the No. 1 export of the South. We were exporting rice to Indonesia.”

To drive home the point to his customers that we shouldn’t just be supporting local farms or local farmers, but an entire agricultural system, his Farmers Feast menu at Blue Hill currently has a dish called Rotation Salad.

The grain salad includes that tillage radish (fermented in 2 percent salt brine so it tastes similar to Japanese tsukemono pickles), along with cooked buckwheat, triticale, rye and millet. It’s dressed in a vinaigrette made from another cover crop: Milky oats.

Milky oats are a tough grass and widely used cover crop that replenishes the soil, and if you simmer the seeds in water and then puree them and strain them, producing a liquid Barber says has “a beautiful milky flavor.”

“In just the Hudson Valley alone, there’s so much cover crop grown that it would bury this block in milky oats,” Barber said. Of course, some of that cover crop needs to be returned to the soil to nourish it, but so much of it is grown, that Barber’s harvest of 2 percent of the tillage radishes from a 35-acre farm will keep him supplied for two years.

“According to an agronomist that we were dealing with at Cornell, taking 2 percent means no effect on the biomass or benefits to the soil; it won’t even notice it. And we got what I think is a great story and a great product,” he said.

“Getting to know a farmer’s system and their constraints and limitations, but also their possibilities, is really amazingly interesting,” he said.