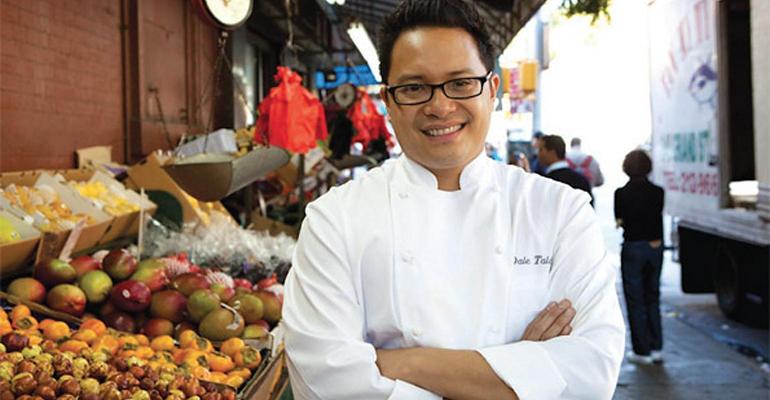 The chef and restaurateur reveals the sources behind his creativity

“Tell me if it’s good. Period. I don’t need to tell you what it is. I’m not feeding you poison.”

For Dale Talde, to label food is to negate it, or at least to deny its full potential. The chef at the three Talde restaurants — in Brooklyn, N.Y.; Jersey City, N.J.; and Miami Beach, Fla. — and the recently opened Massoni in New York City, has a straightforward notion of what food should be.

In a similar vein, Massoni’s food is “Italianish,” and includes biryani rice balls and Detroit-style pizza topped with charred Brussels sprouts, pistachio pesto and ricotta salata. In a nod to Midwestern preferences, the pizza comes with a squeeze bottle of ranch dressing.

“My inspiration is life,” said Talde, who is Filipino-American, grew up in Chicago and graduated from The Culinary Institute of America, in Hyde Park, N.Y. “I don’t have an Italian grandmother to go to and say, ‘Hey nonna, how did you make that pasta?’”

Instead, he gets inspired by the meals he eats, the chefs he sees on TV and anything else that might catch his eye.

Those biryani rice balls, for example, were inspired by the nighttime meals his Bangladeshi food runners would eat during Ramadan, the month when Muslims fast from dawn until dusk.

“When they break their fast every day, one of their wives makes a large meal for everybody. Before anyone eats they make a plate for one of the owners there — myself, David or John — out of respect.”

His head food runner’s wife made a delicious goat biryani, which became the inspiration for his rice balls, except that he cooked it risotto style, finished it with Parmesan cheese and deep-fried it.

Talde seeks out feedback about his food from anyone who will offer it.

“I like input from anybody. Like, seriously, anybody,” he said. “Everyone eats, so everyone has an opinion, whether they believe their palate’s sophisticated, or it’s a six-year-old child.”

But he didn’t ask his runners about his rice balls.

“I’m not making the original,” he said. “I’m making my spin on it, and then immediately it’s not biryani, but they’re so used to biryani, so what’s this? Once you’re told something’s supposed to be something, your opinion immediately changes.”

Correction: Jan. 17, 2017 an earlier version of this story included a misquotation of Dale Talde, who said “myself, David or John” rather than “myself, Dale or John.”