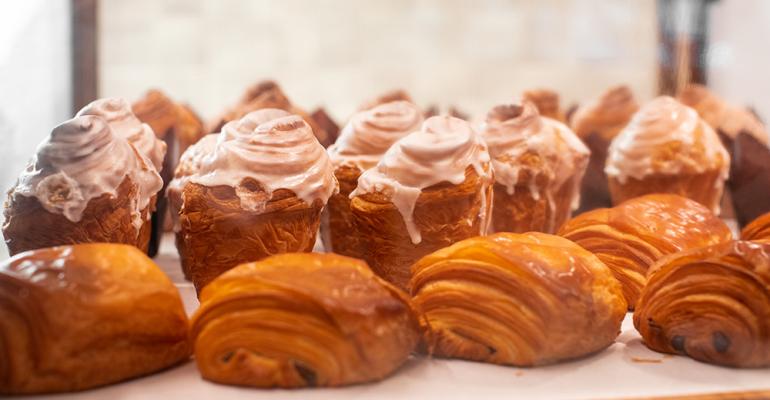 "Clearly the world has changed in the months since we first started working on this restaurant, but one thing that hasn't changed is how excited I am to be able to open Rise & Thyme in Dallas,” said Freitag in a statement. “This city has given me so many delicious food memories, and I am thrilled to be able to be a part of this unique culinary scene."

Freitag opened ‘Cesca Enoteca & Trattoria in NYC in 2003 with restaurateur Godfrey Polistina before moving to The Harrison in Tribeca, where she was executive chef. She then began her 10-year Food Network run before opening Rise & Thyme.

The menu at the “seasonal American café” will feature salads, patty melts, pastas and sandwiches for breakfast and lunch under current coronavirus restrictions and will eventually be open for dinner.

Freitag’s Rise & Thyme will be the second restaurant to open to customers in the new AT&T Discovery District in Dallas.

Originally announced in 2018, the entertainment district has been in development for years. After coronavirus delayed the May opening according to WFAA reporting, the district has opened and its first restaurant, Jaxon Beer Garden, is serving customers.

The five-block redevelopment district in downtown Dallas has been reported to cost over $100 million and, when fully open, will contain a 30-foot rainbow-colored interactive globe sculpture, a 104-foot media wall, a screening room, a dozen restaurants, a food hall and a 20,000 square-foot Dallas Cowboys gym with workouts inspired by the football team.

Restaurateur Lillis, owner of Jaxon Beer Garden, also operates Hospitality Alliance and has this to say about the opening of Freitag’s restaurant, in which he holds a stake:

“I can’t even begin to say how happy we are to finally be able to open this restaurant with Amanda," said Lillis in a statement. "I’ve been a fan and friend of hers for years, and while this opening may be a little later than we originally planned, we definitely believe it was worth the wait. We’re looking forward to bringing something truly special to Downtown Dallas and the Discovery District."

Hospitality Alliance has been working to provide front line workers with free meals out of the Jaxon Texas Kitchen and Beer Garden kitchen in the Discovery District since the pandemic began. Rise & Thyme will donate proceeds from sales every Monday to José Andrés’ World Central Kitchen.

Click through to get a sneak peak of the restaurant ahead of its opening.