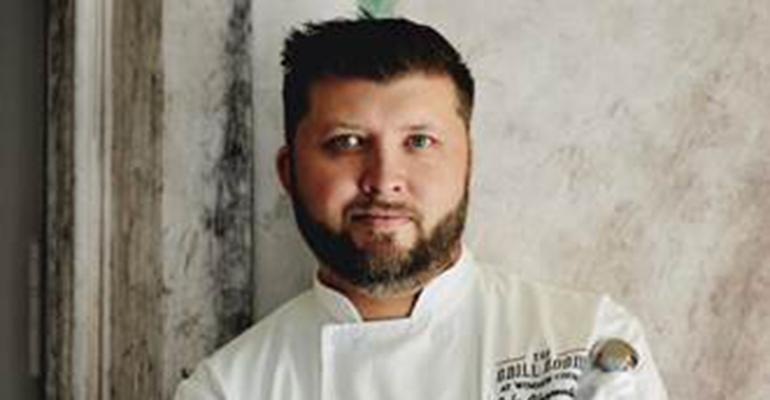 In a restaurant-packed town like New Orleans, hotel venues need to work a little harder to win over locals.

Gabriel Charpentier accepted that challenge in May when he was named chef de cuisine of The Grill Room, the signature restaurant of the Windsor Court Hotel in the city’s business district, which recently completed a $22-million renovation.

Charpentier knows his way around hotel food and beverage. He served previously as chef de cuisine at Jill’s Restaurant and Bistro at the St. Julien Hotel and Spa in Boulder, Colo. Before that, he was chef de cuisine at Willow Creek Restaurant in Evergreen, Colo. He also trained under French chef Benoit Vidal and New York chef Jean-Georges Vongerichten.

In September, Charpentier is planning a revamp of food at The Grill Room. He’s experimenting with blind tasting menus, in which Charpentier concocts five courses on the spot based on an individual diner’s tastes, making for a truly personalized experience. It’s an idea sometimes seen in tiny, intimate venues with a handful of seats, but rarely in a 70-seat hotel restaurant.

Charpentier explained his plans to raise the restaurant’s profile.

How do you hope to stand out in a city so full of fabulous restaurants?

Charpentier:  think the first thing is to avoid falling victim to the cliché restaurant menu. We’re trying to evolve the menu here. We want things rooted in tradition, but we also want to do things that are pushing boundaries.

Charpentier: One thing we’re currently doing — which will most likely become more showcased after the menu change — is we’re offering a blind menu. Right now it’s limited to certain days. When the diner comes in, we’ll offer an interactive five-course meal where I’ll speak with guest at the table and we’ll find out their likes and dislikes, and then we custom-write a menu on the spot for them.

Charpentier: Exactly. It’s a completely improvisational menu. I know a lot of restaurant chefs and people in this industry believe consistency is the key to success. I’m not debating that, but I also believe with spontaneous food, sometimes there’s no recreating it.

How do you plan for that in the kitchen? Is this a feat of knowing what you have at hand ingredient wise?

Charpentier: We make a skeleton base for the menu and if people want a more a more vegetable-focused menu, for example, we’ll showcase what we have in house. It makes life incredibly exciting and challenging at times, but that’s why we do this. At the end of the day, we’re hoping to make people happy. I think at some point this will be the future of restaurants.

How do you price this menu?

Charpentier: Right now we’re offering it at a $50 per head flat rate. If you want to pair wines with each course, it’s another $45. But that’s an introductory price. We’ll look a little more at price as we get into September and October, and it might go up slightly.

Right now we’re talking about (having) one day a week when the whole restaurant will offer just this blind menu experience.

What would you say you’ve become known for as a chef? What’s your shtick?

Charpentier: I think I’m really good at balancing flavors. Really early in my career, I spent time in a pastry kitchen and now I’m pretty good at balancing complete dishes with all the elements, from proper acidity, to salt, sweetness and proper fat content.

What on the menu would represent that?

Charpentier:  have a foie gras dish that seems to have generated a little buzz. It’s a seared piece of foie gras with a house-made strawberry jam, a pistachio cake, fresh strawberries, pickled watermelon rind and fresh mint with a black current caramel sauce. It has a lot of different flavor components to it and they all work really well.