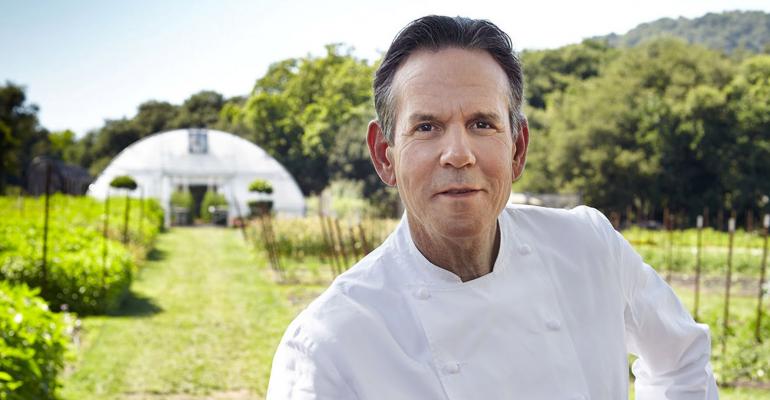 After a two-year delay, Thomas Keller to be inducted into MenuMasters Hall of Fame

The honor was announced in January of 2020

Thomas Keller is being inducted into the MenuMasters Hall of Fame in May following a two-year delay.

The culinary pioneer who helped transform American dining, both with his own restaurants and by mentoring a generation of chefs and restaurateurs, will be honored at this year’s Nation’s Restaurant News MenuMasters gala, sponsored by Ventura Foods, at the Drake Hotel in Chicago on May 21.

Attendees of the gala, which honors culinary excellence across the foodservice industry, from quick-service to fine dining, will receive an autographed limited-edition print of an original painting by impressionist artist Mark Andrew Bailey. The painting is inspired by the beauty of Napa Valley, home of Keller’s landmark restaurant The French Laundry. The work was commissioned by Ventura Foods especially for MenuMasters.

Keller is the only American-born chef to hold multiple three-star ratings from the Michelin Guide, for Per Se in New York City and The French Laundry in Yountville, Calif. He was also the first American male chef to be named a Chevalier of the French Legion of Honour, the highest decoration in France. In 2017, Keller led Team USA to win the gold medal in the Bocuse d’Or competition, the first time the United States has won that honor.

Keller started his career in the restaurant business as a dishwasher at a restaurant managed by his mother in Palm Beach, Fla. In 1983 he moved to France to apprentice in multiple fine-dining establishments before opening his first restaurant, Rakel, in New York City, in 1986. He later moved to California, and in 1994 he purchased The French Laundry from its original owners. It was there that he began to change the way Americans thought about dining.

A generation of the country’s greatest chefs have been mentored by Keller, including Grant Achatz, Corey Lee, Eric Ziebold and Jonathan Benno among many others.

“This honor for Thomas Keller is long overdue, and not merely because it has been delayed by the pandemic,” Nation’s Restaurant News senior food and beverage editor Bret Thorn said. “Chef Keller changed the way that Americans think about fine dining and imparted an ethos of culinary excellence and polished service standards that are now being passed on from the people he mentored to a third generation of chefs and restaurateurs.

Keller opened The Surf Club Restaurant in Surfside, Fla., in 2018 and La Calenda in Yountville, Calif.

He is also the author of five cookbooks, with more than 1.3 million copies in print.

In the wake of the pandemic he founded the Keller Restaurant Relief Fund to help restaurant workers in need.