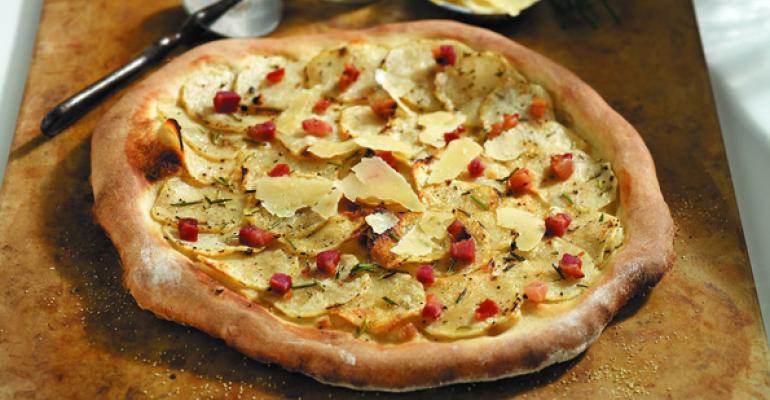 For pizza dough: Combine flour, salt and yeast in bowl of stand mixer. Add water and olive oil; mix with dough attachment until just blended. Switch to dough hook and knead at medium/low speed for about 5 minutes, or until dough cleans sides of bowl and gathers smoothly around dough hook. Remove dough to lightly floured board and knead by hand about 1 minute or less to bring together. Place dough in lightly oiled bowl. Turn to coat dough with oil, cover with plastic wrap and ferment until doubled in bulk, about 60 to 90  minutes. Turn dough onto lightly floured board with dough scraper and divide into quarters. Form each quarter into a ball, trying not to deflate it too much. Place dough balls apart on a floured tray and dust tops with flour. Cover with plastic and proof until doubled in size, about 1 hour. Gently form dough into a circle, trying not to deflate. Keep floured and place on a well-floured peel to slide pizza into oven.

For pizza: One hour prior to baking, place a pizza stone on lowest shelf of 550°F oven. Toss potatoes with olive oil, rosemary, salt and pepper. Reserve. Saute pancetta until it releases some fat and just begins to get crispy. Remove; drain off fat and reserve. On a floured peel, form dough into four 9” circles. Cover with barely overlapping potato slices. Divide pancetta between all pizzas, strewing dice over all surface. Bake until done. Top with Pecorino Sardo and serve.