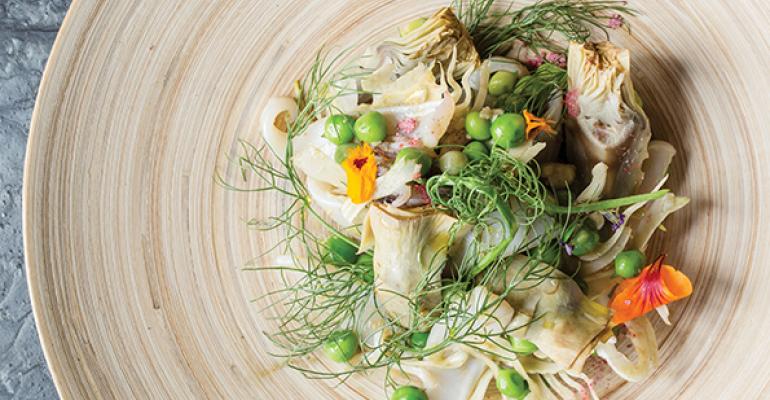 <p>Jaime Chavez&rsquo;s cooking builds on the philosophy of respect for tradition and simple flavors.</p>
Food & Drink

Before rising star chef Jaime Chavez arrived to guide the kitchen of Sirena Gourmet Latin Seafood in San Diego, the 30-year-old spent time working at El Cingle just outside Barcelona. At the time, El Cingle embraced a modern, avant garde movement that included molecular cuisine, much to the chagrin of Maria, the executive chef’s mother. She favored traditional Catalan dishes as did Chavez, who believed in her philosophy of respect for tradition. She taught him many traditional dishes, including this squid and pea salad starter, which is one of Sirena’s biggest sellers. “Maria taught me that the best dishes are made from simple flavors, and when we respect the products, they give us back the very best of them,” says Chavez.

In a hot pan with olive oil, sauté garlic and squid; cut into rings. Add English peas, season with salt and pepper, then add the vinegar and mint. Remove from heat and add celery, fennel and the crispy bacon. Serve.