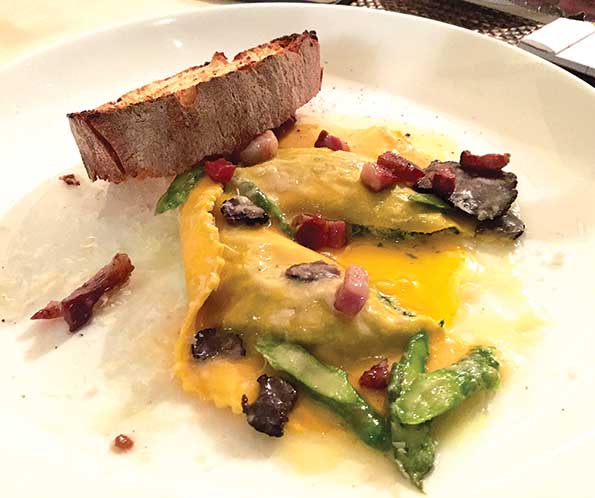 What is it about an egg that makes everything better? It seems just about every chef is crowning menu items with an egg. An egg atop a burger is a delightful mess. An egg atop a pizza begs to be poked so it can spread joy all over the pie. But that’s easy. Have you tried to put a raw egg in a ravioli? Chef Giovanni Rocchio of Valentino Cucina Italiana in Fort Lauderdale has been doing it for 20 years. It took a bit of finesse at first, but he’s mastered it.

Rocchio first encountered ham and egg ravioli in an Italian restaurant decades ago. He was so intrigued; he headed back to his kitchen to develop his own version. Ever since, he’s been serving the dish nightly to his patrons. He even teaches the technique during cooking classes in his restaurant. Here’s a quick peek at how he does it:

The ravioli filling consists of 4 cups of ricotta cheese, 2 cups of cooked, strained and finely chopped spinach, nutmeg and salt and pepper to taste.

The sauce is simple: 8 tablespoons of truffle butter and the chicken stock.

To make the ravioli, roll out the dough to 1/8-inch thick. Cut the dough into 6 x 6-inch squares.

Mix all the ravioli filling ingredients until smooth and place the mixture in a piping bag. Pipe a one-inch circle of filling in the center, making a nest for the egg yolk. Put one egg yolk in each ravioli. Brush egg white around the edge of the ravioli and top with another sheet of dough. Press tightly around the edges to seal the yolk. Using a round cutter, create ravioli circles around the filling and egg yolk and cut away the extra dough.

Cook the ravioli in salted, boiling water for 3 to 4 minutes until tender.

Put truffle butter, asparagus and ¼ cup of chicken stock in sauté pan and heat. Transfer ravioli to sauté pan and toss until well coated. Place on dish and garnish with Parmesan, ground pepper and crispy pancetta.

Rocchio’s Ham & Egg Ravioli is certainly more labor intensive than dropping a fried egg on a burger, but the payoff is worth the effort. As soon as the ravioli is pierced, the warm, cheese yolk spills out on to the plate to mingle with the sauce. Yum!