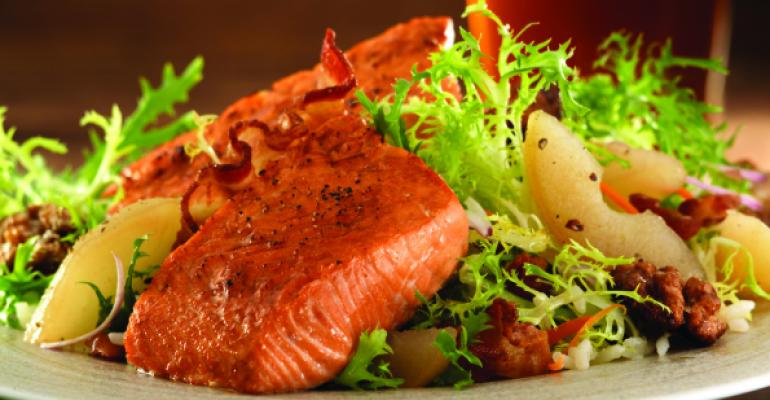 For poached pears: In a saucepan just large enough to hold pears, combine 1¾ cups water, sugar, vinegar, pepper and cinnamon. Bring to a boil. Add pears and additional water if needed to immerse pears. Simmer until pears are soft but not mushy, about 30 minutes, depending on ripeness. Remove pears with a slotted spoon. Cool, then refrigerate until ready to use. Can be made up to 4 days ahead. Reserve and refrigerate to use again if desired.

For candied walnuts: Preheat oven to 350°F. In a medium bowl, combine sugar, salt and cayenne. In a medium saucepan, bring 1 quart water to a boil. Remove from heat; add walnuts and let stand 30 seconds. Drain. Mix warm walnuts with sugar mixture. Drizzle with vanilla and mix well. Spread nuts in single layer on a parchment or foil-lined baking sheet. Bake 15-20 minutes, stirring twice until nuts are evenly toasted and sugar is caramelized. Cool on pan. Makes about 2⁄3 cup.

For vinaigrette: In a medium skillet, cook bacon over low heat until fat is rendered and bacon is crisp. Transfer bacon bits to paper towel, reserving 2 Tbsp. fat in pan. Add garlic and shallots; sauté until softened but not browned, 3 to 4 minutes. Stir in sherry wine, scraping browned bits from bottom of pan. Remove from heat so wine does not reduce. Add sherry vinegar. Pour warm mixture into a bowl and gradually whisk in oil until thickened. Add bacon and adjust seasoning with salt and pepper. Cool until ready to use, or refrigerate. Bring to room temperature to dress salad.

To serve salmon salad: Heat canola oil in a large skillet over medium-high heat. Add salmon fillets skin-side down. Season with kosher salt and pepper. Cook over medium heat for 2 to 3 minutes, or until salmon releases easily from skin with a thin spatula. Turn and cook to desired doneness.