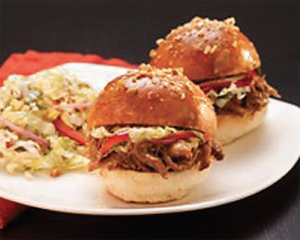 For pork: Roast pork butt at 500°F for 25 to 30 minutes, turning over at least once, until well browned on all sides. Drain rendered fat. Pour vegetable stock mixture over pork; cover tightly and braise at 300°F for 2 to 2 ½ hours until fork tender. Cook pork until it can be handled and shred well, removing fat and any tough tissue. Pour in plum and peanut butter sauce; blend well.

For service: Separate heels from the tops of rolls and place with cut-side down on a lightly buttered sheet pan. Brush tops with egg wash and coat with ½ tsp. finely ground peanuts. Toast rolls at 400°F for 6 to 7 minutes. Flip the heels over to assemble. Evenly distribute spicy peanut pulled pork over heels of the rolls. Top with peanut cabbage slaw and top with roll lids. Serve immediately.