Chefs give eggs creative riffs, from pairing them with lamb to using duck eggs rather than the typical chicken eggs.

Eggs have long been considered a symbol of spring. What’s more, National Egg Month is coming up in May. That’s why this is a good time to check out these egg-rich ideas — inspirations from chefs around the country. They’ll help you come up with customer-pleasing egg-based menu ideas of your own. 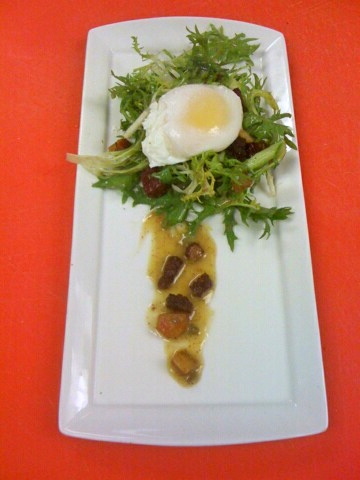 Frisée salad topped with a poached egg is a bistro-style recipe developed by Chip Flanagan, executive chef of Ralph’s on the Park in New Orleans. Ingredients include sous vide short ribs, bacon lardoons, and fully cooked pork belly. The meats are diced and fried to order; the egg is sous vide in the shell.

PHOTO: COURTESY OF RALPH’S ON THE PARK

Green eggs and lamb (kind of like Dr. Seuss’s Green Eggs and Ham) is a creation of executive chef Lee Richardson of Ashley’s at The Capital Hotel in Little Rock. The dish, a crepe-like thin green omelet wrapped around braised lamb ragout, was developed for a James Beard House event last year.  Eggs on the menu at Ashley’s include soft shell crab with avocado, black-eyed peas and one egg, over easy.

The chef’s choice burger is an idea from chef/owner Peter Smith of PS 7 in Washington, DC. The burger is served with a fried farm-fresh organic egg, Gruyere, house-smoked bacon and heirloom tomatoes on a brioche bun. On the menu at PS 7 is the rich lobster hash with sunchokes, fried quail egg, pearl onions and rosemary Hollandaise sauce.