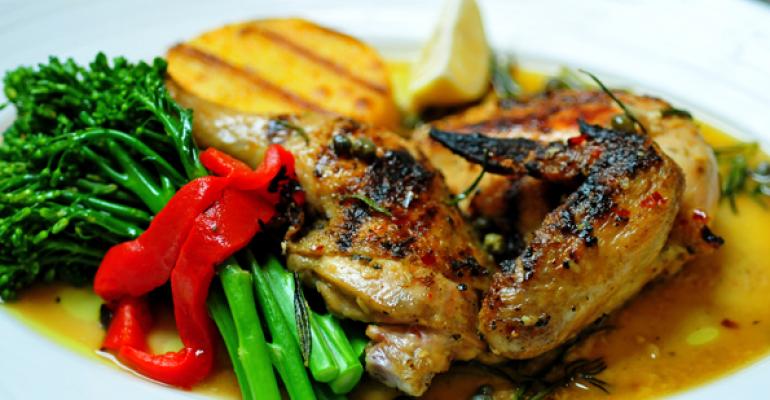 “It is a hearty yet light dish,” he says, “marinated then grilled under a ‘brick.’ This creates a crispy skin, while keeping the meat juicy. Alongside it, we serve our grilled polenta cake, broccolini with roasted red peppers, and a savory rosemary broth. The flavors of Tuscany really come through in this dish. It is also my personal favorite, because it’s how I like to cook at home. I love to grill all year-round, and this dish is simple and flavorful.”

The dish is featured on the restaurant’s new fall large plates menu at lunch and dinner ($19).

His earliest cooking memory, Gutierrez says, is making pizza with his mother.

“From the fresh cheese to rolling out the dough, all while the smell of her badass pizza sauce filled the house, this is a memory that inspires me every day, and it’s one I will never forget.”

For marinade: Combine oil, lemon juice, sugar and seasoning in a bowl. Add chicken halves to the bowl and massage the marinade into the flesh of the chicken. Cover; place in the refrigerator and marinate for 12 hours.

For brick oven chicken: Remove marinated chicken from the bowl and shake off the excess. Season both sides of chicken with salt and pepper; place skin-side down on grill over low heat. Place a brick wrapped in foil or a cooking weight to press chicken into the grill. Halfway through cooking, remove brick and flip the chicken. Cook until internal temperature reaches 165°F.

For sauce: In a sauté pan, heat oil and saute the garlic, rosemary and red pepper flakes. Cook until garlic is translucent and slightly golden. Deglaze the pan with the white wine and let it reduce until almost dry. Then, add both broths and the capers. Simmer sauce until it reduces by half. Once reduced, pour over cooked chicken. Serve alongside dishes such as polenta, broccolini and roasted red peppers.