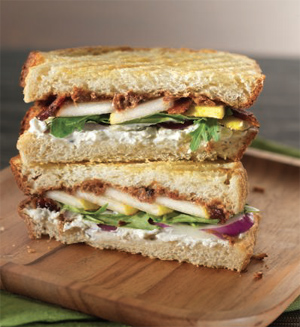 For bacon jam: Cook bacon in large, heavy pan over medium high heat until lightly browned and beginning to crisp. Remove from pan and set aside to cool. Return pan to heat and add onion and garlic, cooking until soft and translucent. Cut bacon into 1” pieces and add back to the pan along with brown sugar, coffee, vinegar and maple syrup. Bring mixture to a boil and reduce to a simmer. Simmer over low heat, stirring occasionally to prevent sticking, for up to 3 hours or until the onion is indistinguishable from the bacon and the entire mixture is deep brown in color and has a thick, jam-like consistency. Remove from heat and cool 20 minutes. Transfer cooled mixture to a food processor and pulse in intervals of several seconds until the ingredients are finely chopped.

For blue cheese spread: Add blue cheese to softened cream cheese and mix gently until evenly incorporated and smooth. Divide mixture and spread evenly on 12 of the 24 slices of bread.

For panini: Toss pear slices with sugar and melted butter. Spread the other 12 slices of bread with bacon jam. Top the blue cheese-topped bread with sliced pears and several pieces of arugula. Arrange slices of red onion on the bacon jam-topped bread. Join the slices of bread to make 12 sandwiches and brush the top of each one with olive oil. Toast the sandwiches in batches, placing the oiled side down on the panini press. Brush the other side with oil and press down for 2 to 3 minutes per side, or to your liking.