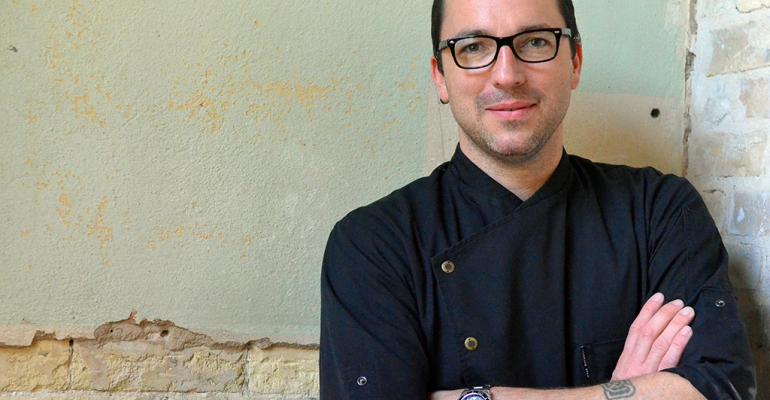 Cured is one of San Antonio’s most respected restaurants, known for its whole-animal philosophy, a handcrafted menu centered around house-cured meats, pickling and local ingredients, and its comfortable gastropub atmosphere. Its chef-owner, Steve McHugh, one of Restaurant Hospitality’s “15 to Watch in 2015,” finds himself in a great place now, both professionally and personally. But the road to McHugh’s present contentment and success hasn’t been an easy one. The 40-year old has had more than his share of adversity: A hurricane and cancer have thrown up roadblocks, but McHugh has come out on the other side stronger, focused and loving his life.

McHugh, a Wisconsin native who went to college on a saxophone scholarship before turning his creative energies to the kitchen, started his professional life in New Orleans, where he worked in great restaurants as a CIA student extern. McHugh set down roots in the Big Easy, working in the kitchens of the legendary Brennan Family and Creole chef Chris Brown (Metro Bistro). McHugh eventually landed a coveted job as chef de cuisine at Besh Steak, part of the acclaimed John Besh Restaurant Group.

One of McHugh’s career-changing moments came in 2005 with the arrival of Hurricane Katrina. While the Besh properties were spared major damage, McHugh recalls 20-hour days spent with coworkers scrubbing down the restaurants with countless gallons of bleach, serving up meals to hundreds of FEMA workers from a trailer and scrambling for ingredients to stock his coolers.

McHugh worked his way up and around the Besh Group, becoming chef de cuisine of La Provence, and executive chef at Restaurant August, where he put his childhood experience on his family’s farm to use by establishing a kitchen garden and farmyard onsite. In 2010 Besh, his employer and good friend by this time, sent McHugh to establish the group’s first restaurant outside New Orleans—Lüke a German-style brasserie in San Antonio.

Shortly after arriving in San Antonio, McHugh was blindsided by a cancer diagnosis. He had non-Hodgkins lymphoma—manifested in two tumors—one the size of a grapefruit. McHugh opened Lüke, beat the cancer, and went on to open his own restaurant, Cured. We caught up with him recently and talked about whole animal cooking, his health and the lessons of adversity.

You were diagnosed with lymphoma right before you left for San Antonio. How did you balance treatment and opening a restaurant?

McHugh: It was good timing, really. I was diagnosed as we (he and wife Sylvia) were headed here to open Lüke. There are always pushbacks when you’re opening a restaurant—construction or liquor license issues, et cetera—so I was working a lot from home. It wasn’t the physical work of the kitchen. It was also a blessing to be in San Antonio when I got sick because of the tremendous treatment options here. In New Orleans, a lot of doctors had left after Katrina.

McHugh: It was super scary. By nature I’m a confident person. I see the good even in crappy situations. Even with something as emotional as Katrina, I just said, “Let’s do our best and rebuild.” So I took a positive approach [with the illness], but it was hard because I’m used to going a hundred miles an hour, and when you have cancer you need to slow down. The thing about chemo is it’s very defeating in a lot of ways. There are a lot of highs and lows. Just when I would start to feel better, I’d have to turn around for another round of treatments.

Three years after opening Lüke, you struck out on your own. How did you make that decision?

McHugh: I loved working for Jonathan. He is one of my best friends. When I decided to open Cured it was happenstance. After a year’s worth of chemo, I was hell-bent on getting involved [in cancer advocacy]. I started meeting with The Leukemia & Lymphoma Society’s South Central Texas Chapter and offered to cook for their Light the Night event. A friend of mine, Johnny Hernandez [La Gloria restaurant] was there and we talked about [my] staying here permanently. He knew of this space [at Pearl, San Antonio’s groundbreaking culinary center that located at the former site of the legendary Pearl Brewery.] It hadn’t really occurred to me, but I’d fallen in love with San Antonio. I got my life back here and I thought putting down roots here was a way to pay back the city.

Behind the 'Cured' name

Tell us about the name “Cured.”

McHugh: Obviously, there’s a dual meaning, as in the curing process [the restaurant’s specialties are charcuterie and pickling], and as in healing. I think more about the things I put in my body now. The hardest thing about blood cancer is that there are no known causes. When someone tells you that you have it, the first thing you ask yourself is, “What did I do wrong?”  And there’s no answer. I think more now about everything that goes into my body. Do I want mass-produced vegetables, or ones that come from a farmer down the street? It goes for the animals as well. Some of my philosophy comes from being on a farm, but I also started thinking more about animal health when I was sick. Stresses weigh down on people and animals in similar ways. Are they being treated well, living on top of each other or are they being pasteurized and eating beautifully grown grains? Stresses affect the animal and we ingest that.

You were one of the first chefs to introduce the whole animal approach to San Antonio. Why was that important to you?

McHugh: I buy whole animals because it’s not easy to raise whole animals. When I was a kid, we always had a freezer stocked with whatever we were raising—beef or hogs. It’s easy to say, "I want a pork belly or chops," but the farmer has to make money on the heart, the lungs, the whole animal. These farmers decided way before I got involved that they wanted to raise a healthy animal and I want to be that chef that says, “I appreciate what you’re doing.” We took the approach that the menu would dictate everything that would happen in the restaurant, from the kitchen layout to the name. We said, “Let’s let the menu do the talking and everything else will fall into place.” There weren’t many people taking that approach here in 2013 [when Cured opened], but at the same time I had these farmers who were just looking to get rid of stuff like pigs' feet. That’s where we started, and we don’t shy away from it. The charcuterie is the first thing you see [in the dining room charcuterie case]. It’s a signal to everybody that you know where you are and we’re putting our money where our mouth is.”

How has that approach been received by guests?

McHugh: It benefits the guest because the money saved gets passed down: If I can sell a head for $40, pork chops can be cheaper. Early in my career, I got away from what I learned being a farm boy. In the 1990s and early 2000s; we were so ingredient-focused then. But 2005 was a turning point for John and myself. We were in a position [after Katrina] where there were no deliveries coming into New Orleans. What we did have were local fisherman and farmers who had turnips to get rid of, or beautiful red fish or hammer jack they had to move. We had to search and scour for whatever we could get our hands on. If you heard of someone who had good spinach, you’d get in the car and go looking for it. An heirloom tomato was the most precious thing in the world. You start to respect the food. You can’t fuck up a case of tomatoes and say, “Oh, well.”  We worked on building the farm behind the restaurant and it opened other peoples’ minds as well.  I had run away from the values I learned growing up, but I came back to embrace it, and I still do.”

How does the menu balance off-cuts with things customers are more comfortable with?

McHugh: Well, for example, we go through about three lambs per week. The good news is that there’s only one liver or per lamb, so there’s a good ratio of what we can offer. We can also run [off-cuts] at a price point that’s not too risky for the guest. The other side of it is that we get people who come in because they grew up eating like this. Whether it’s for memory’s sake or curious foodies, we don’t have a problem moving three whole carcasses of lamb and starting fresh the next week. We change the menu to reflect what we have. The menu changes all the time. We might get the most beautiful squash one week, and the next it’s something else.

Tell us about how your training led you here.

McHugh: I was working in youth camp kitchens when I was 14. I was never the best student; it wasn’t until I went to culinary school that I was in a place that I belonged. I figured out that I was a hands-on learner, not a classroom learner, so culinary school just opened my eyes to a whole new world. I had so many great teachers, guys like Anthony Legouri. People who just made me say, “I’m gonna shut my mouth and listen to this guy.” It was my turn to instill my philosophy and training. It’s a gamble that’s paid off. Staff and customers believe in it.

You work with your wife, Sylvia. How has that been?

McHugh: Great! We met in a restaurant back in 2000 [Storyville, New Orleans]. When I went to work with John, she left the industry, but came back to work at Cured with me. More than anyone in the entire restaurant, I know she has my best interest in mind. She’ll get behind the line and taste things or randomly order drinks and try them. She has a tremendous role because she does a lot of the things I don’t like to do, the things that slow me down; so I can just concentrate on being a chef. Knowing she has my back allows me to work as hard as I can making sure the food is where it needs to be.

You’re active in charities, you served on the Advisory Council of the CIA San Antonio Campus…What’s next?

McHugh: This! A lot of chefs are always thinking about the next thing, and people ask if I’m going to do this [restaurant] again; but I’m happy just making sure Cured is perfect. I make a good living, and we’re not trying to replicate it, at least not yet.

How are you feeling?

McHugh: I feel great. I’m four years in remission now. I see my doctor every six months; he’s a big foodie, and now we get to talk more about food than cancer, which is a pleasure.