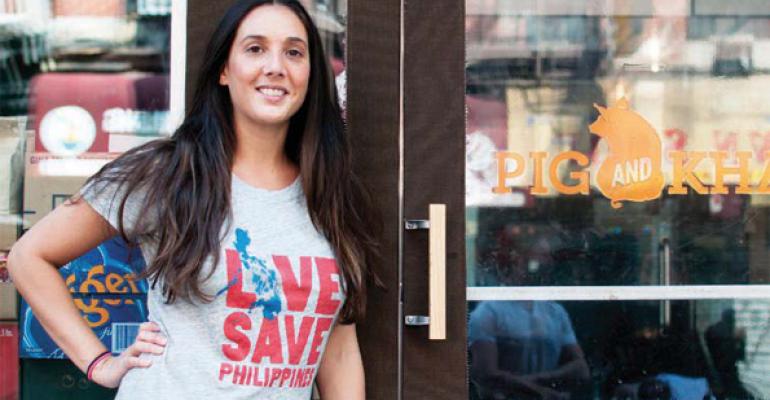 Leah Cohen got her first break in the business landing a job with David Burke at Park Avenue Café in New York City. Burke encouraged her to travel to Italy where she cooked at the Michelin-stared restaurant, La Madia, in Sicily. Upon returning, she was hired at Eleven Madison Park, where she toiled under Chef Daniel Humm. Later, Cohen went to work for Anne Burrell at Centro Vinoteca, also in Manhattan. While there, she took a break to compete on Bravo’s Top Chef, where she collected a big fan base. She then took a year off to travel throughout Southeast Asia. That trip led to the creation of Pig and Khao, her NYC restaurant that features Asian street food.

1. T-shirts. I hate wearing a chef jacket. I’ll always be in a T-shirt at work.

2. Fresh limes. I could not live without them. Squeezing fresh lime juice over any dish freshens it up and adds acidity.

3. Joyce Chen scissors. I use them for everything from cutting open packages to portioning the cooked eggplant in our new Burmese eggplant dish.

4. Thai Food. This cookbook by David Thompson is basically the encyclopedia for Thai food.

5. Robot Coupe. We make a lot of fresh curry pastes. If I had to make all the curries in a mortar and pestle, we wouldn’t have any curries on our menu.