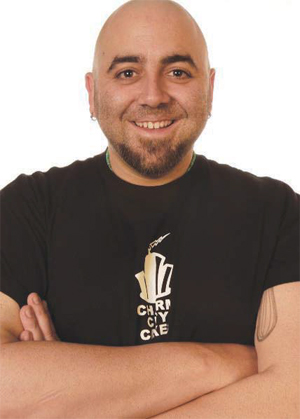 Duff Goldman is best known for his starring role in the Food Network’s Ace of Cakes. A professionally trained pastry chef, he is the founder of Baltimore’s Charm City Cakes, Charm City Cakes West in Los Angeles and Duff’s Cakemix, a bakery and d.i.y. cake shop in West Hollywood where customers can decorate their own cakes. Goldman has been nominated for two James Beard Awards and has been featured on Iron Chef America, Oprah and The Tonight Show.

1. Slow-milled organic flour. Big companies put so much crap in flour and make so much that they have to grind it quickly. That heats up the flour, activates the gluten and makes the flour useless. Starting out with a good, clean flour gives you a much better chance of baking something good.

2. Propane blowtorch. Not the cute little $200 thing that you bought from  some catalog that sells drapes for your kitchen. It doesn’t do diddly squat. I’m talking about the big blue propane torch from Home Depot that can melt copper, warm up a big bowl of butter and make a brulee in 25 seconds.

3. Nick Malgieri’s How to Bake. Every recipe works, which is rare in most cookbooks. Also, the recipes are useful and clear. They’re not vanity recipes that stroke the author’s ego and make the reader feel inferior.

4. 20-quart Hobart stand mixer. Hobart mixers last, by far, the longest in the business. They have great torque and can deal with any abuse you dish out. The company doesn’t pay me or compensate me in any way, but its mixer’s worth is an industry truth that everyone knows.