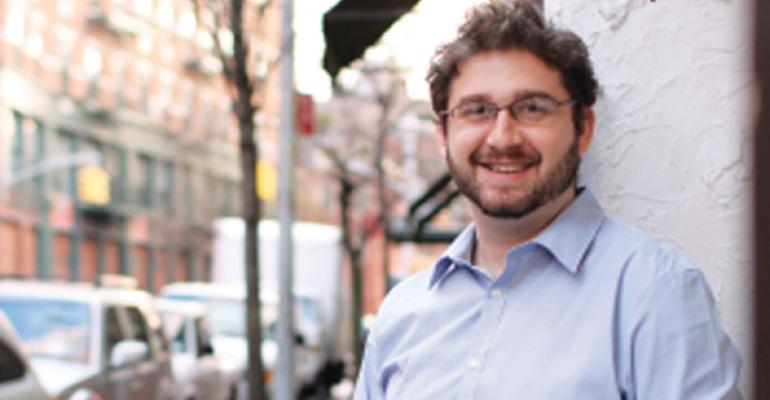 Jesse Schenker's restaurant was already generating plenty of buzz in and outside of New York City, but then the executive chef and owner of Recette lost 60 pounds. The New York Times wrote a lengthy feature about his personal journey, a spot on Good Morning America followed and the 30-year-old chef’s star has been shining even brighter.

Schenker had already appeared in Restaurant Hospitality as a face to watch in 2011, and was also featured as one of the top young chefs by Details magazine, Zagat and Forbes. Recette, an urban American restaurant in Greenwich Village showcasing Schenker’s classic French technique in a modern and approachable way, had received  glowing reviews from the Times and the New Yorker soon after it opened in 2010.

Now, at a time when the obesity epidemic in this country is front and center thanks to Michelle Obama’s mission to promote healthy eating and exercise, the chef is once again in the spotlight. Schenker recently took some time to discuss his weight loss and how it’s changed his approach to life, and at least a little, to cooking.

RH: When did you realize you needed to lose weight?

Schenker: My son just turned two Feb. 17, and in 2012 at his one-year physical, I got on the scale in his doctor’s office. I weighed 255 pounds. “Holy shit.” My wife was telling me I was obese, but I had been saying “I’m just a little overweight.” We Googled it, and I was obese.

RH: How’d you lose the weight?

Schenker: I worked with a weight-loss specialist, a psychologist, who helped me write up a meal plan … My thing was I can’t moderate. I’m a finisher. Dr. [Stephen P.] Gullo said if you can’t moderate, eliminate. The food I can’t moderate, I wouldn’t touch, not even fantasize about it. I was treating it like an alcoholic would.

And I wasn’t changing when I ate. Think about all these diets—eat five times a day, early breakfast to get your metabolism going. That’s bullshit. I wake up at 10 and don’t go to sleep until after 1. I always eat at midnight after work. The doctor said, “We’re not going to change you, let’s change what you consume.” So I ate a pound of shrimp at 1 a.m. One baked potato has about the same calories. Don’t eat less; just eat the right stuff.

RH: So now you’re the chef who lost 60 pounds, right? Are you still?

Schenker: I’ve totally kept the weight off. I don’t want to be in the 200s again (he’s in the mid-190s, at 5-foot-10). Everyone keeps asking how’s the diet going. It’s not a diet, it’s become a lifestyle. I like eating better. But all those questions are good. It keeps me accountable and it’s not really that annoying. After all that buzz, I can’t be that guy who got thin and then got fat again.

RH: With all the attention on the obesity epidemic and the First Lady’s crusade, do you feel you have a responsibility to your customers concerning their health?

Schenker: I do, but I don’t sacrifice flavor. I’m removing fat when it’s not necessary. So much of habit is to finish with butter—it’s French technique. I’ve experimented to see when you can leave it out and use the juices and stocks, not the creams and butter. In a lot of ways it works and tastes even better. Carrots are so sweet naturally, when you add cream the texture may be better, but it dampens the sweetness. I’m always conscious of it now and talking about it around my family and friends. Heart disease is still the number-one killer.

RH: Has the menu changed as a result of this?

Schenker: There’s definitely no visible change to the food. We still use cream or butter, but I’ve removed it where it’s not necessary. Ultimately to have the best broccoli soup, you blanch the broccoli in salt and boiling water, and that’s the water you want to use when you blend it. Lots of restaurants boil it and put it in the blender with a shitload of cream. It tastes good, but not like broccoli. It tastes like cream with broccoli. If you use that water, and the blender the right way, it creates airiness like cream.

What's ahead for Schenker

RH: You beat fellow New Yorker Geoffrey Zakarian on Season 12 of Iron Chef America. How big of a thrill was that?

Schenker: It was an honor. I watched the original as a kid and this was a goal of mine. I’m not into being on cooking shows like Top Chef or Chopped, but I’ve always loved Iron Chef. I’m not stupid, though. I’ll do what I need to better the business, restaurant and brand. I’m in New York, so you have to play the game.

RH: How have you handled all this exposure?

Schenker: It’s been great, but really hard. The people I grew up with tell me, “You must be so happy.” I am, but with all this comes sacrifice. It’s very stressful. I have responsibility for a lot of people. There’s always something going on; the calendar is heaping. I’ve always got somewhere to be, someone to talk to. There’s no vacation. I got married in a courthouse. I feel guilty sometimes with the time I spend with my son, but I think if I work really hard now, I can make up for it later. But you can’t get those years back. It’s a constant struggle in my head.

RH: Tell me about “Mondays with Jesse,” your monthly private 10-course tasting inspired by seasonal ingredients.

Schenker: That’s awesome. I own a business, pay bills and do all that, but I’m still a chef at heart—a creator, an artist. Probably a couple years ago I said to my publicist, once a month I’d love to do a 10-course tasting, take out half the tables and just cook for 20 people to get my creative juices going. I don’t want to get away from that tenacity and passion. So the second Monday of every month we close off the books, shelve the daily menu and a couple days before I write a 10-course menu and the 20 people who come in are guinea pigs. Ten to 15 of the customers are the same every month.

RH: Is it good for business? Do any of those dishes make the real menu?

Schenker: Oh, it’s totally for me, to break up the monotony of the daily grind. Really, it’s probably a money loser (the cost is $125 per person). Yes, sometimes things are so good we adapt them into the regular menu. I do “Mondays with Jesse” to get back into the groove.

RH: Is there another restaurant in your future, and would you pursue another cuisine?

Schenker: I’ll never experiment with another cuisine, unless maybe I travel to Asia and really learn that cuisine. I would love a bigger audience and a bigger kitchen. Another restaurant is in my future and in my head, but there’s nothing in stone. My goal right now is to make Recette the best it can be.