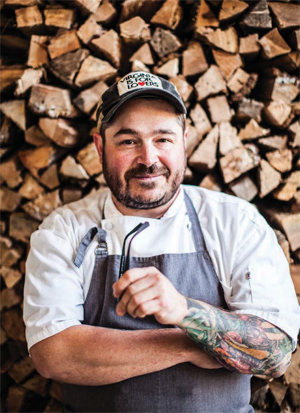 Sean Brock is the chef owner of McCrady’s and Husk in Charleston, SC. There’s also an outpost of Husk in Nashville. He was named “Best Chef Southeast” by the James Beard Foundation in 2010.

1. One thing you don’t know about me is that I love music as much as I love food. I’m also really interested in learning how to country waltz.

2. If I could trade places with one chef it would be Dan Barber, because he works in such a beautiful place full of inspiration and endless possibilities.

3. One of my most memo-rable meals was at Coi in San Francisco. Daniel Patterson is cooking cerebral and thoughtful cuisine, and it’s also unlike anything else in America right now.

4. If there was no corn, I’d have no reason to live. Corn is responsible for all my favorite foods—grits, cornbread, bourbon, etc.

5. My go-to drink is micheladas.

6. If I were on death row my last meal would be anything cooked by my mom.

7. My worst culinary creation came about the first time I was allowed to cook by myself. I cooked black-eyed peas and used every spice in the pantry. It was inedible, but my mom pretended to like it.

8. If I could change one thing about me I would be a better public speaker. I really admire anyone who can do that.