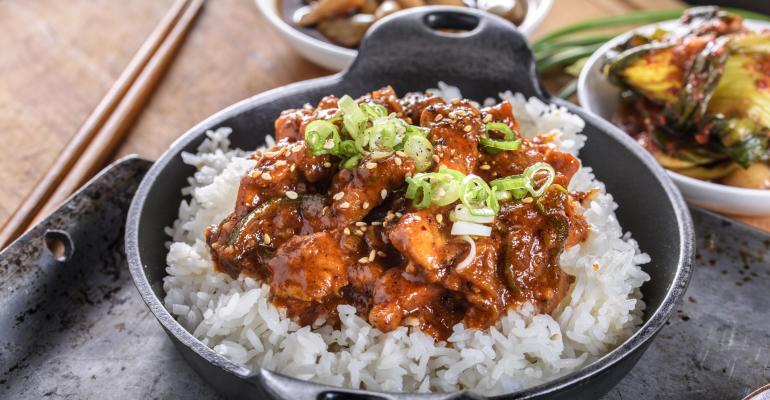 Tapping into a hot trend with Korean cuisine

Operators cater to consumers seeking Korean barbecue and other on-trend foods of the country.

While Korean-style restaurants have been steadily gaining in popularity among U.S. diners, the foods of Korea are also finding a place for themselves on mainstream restaurant menus. Consumers are ordering Korean food everywhere — from small barbecue establishments to large chains. Operators say adding Korean dishes to the menu is great way to build traffic and boost sales as consumers warm to more global flavors and innovative presentations.

Some of the best known Korean preparations include kimchi, or fermented cabbage; bibimbap, or mixed rice and vegetable bowl; and bulgogi, or grilled beef. One aspect of the cuisine that is really taking off, however, is Korean barbecue, which involves bringing a grill to the table so guests can experience the meat-cooking process. It also refers to the popular sauces used to flavor chicken wings and other items.

“Korean barbecue is popular right now because it has the combination of flavors the world has been longing for,” says Robert Austin Cho, chef and owner of Kimchi Smoke Barbecue in Westwood, N.J.

Cho observes that Americans are becoming familiar with Korean pop culture such as K-pop music and televised Korean dramas, and with conglomerates such as LG Corp. and Samsung Group. This growing familiarity is prompting consumers to explore Korean cuisine. At the same time, consumers are hungry for innovative, interesting flavors. “Korean food in general has the perfect harmonious flavors,” he says. “It is neither categorized as spicy, salty or sweet, but rather a balance of all the flavors.”

Among the popular dishes at Kimchi Smoke is Korean BBQ Chicken, featuring hickory-smoked chicken wings that are lightly fried and topped with sweet gochu glaze, sesame seeds and scallions, and served with Korean slaw.

The interest in Korean popular culture is only one factor contributing to the growth of the cuisine. “Koreans have been a big part of the immigrant narrative of American society,” says Hanna Kuark, director of marketing for Honey Pig Inc. In fact, Micky Kim, who immigrated from South Korea to Baltimore, opened her first Honey Pig Korean BBQ in Annandale, Va., 10 years ago. Today, there are four locations of the Korean barbecue restaurant in Virginia and Maryland.

The allure of the food is the bold flavors in the sauces, which can be made in-house or purchased already prepared. “Like cuisine-focused cultures such as France, Koreans use sauces to elevate seasonal, fresh and available ingredients,” Kuark says. “Meals enjoyed by the Korean culture incorporate many flavors including heat, but must be well balanced with the many dishes that are served during each meal.” For example, one popular barbecue dish, Spicy Pork Belly, is served with side dishes to complement and even combat the spiciness.

This fall the Atlanta-based Wing Zone launched its newest flavor, Korean Q, which combines sweet, savory and spicy. “The initial feedback has been phenomenal,” says Matt Friedman, chief executive and co-founder. “I don’t think customers know what Korean barbecue is, but they try it and say, ‘Wow! This is great flavor — a little heat, a little teriyaki, mixed with barbecue.'”

The Korean Q flavor, which is Wing Zone’s word for sauce, is available on chicken wings and burgers. Korean Q appeals particularly to the millennials who do not necessarily want to eat the same foods their baby boomer parents ate. “Our customer demographic is younger, college and military,” Friedman says. “They venture away from the traditional Buffalo flavor.”

Next year the 100-unit chain will launch a hot Korean flavor spiked with the on-trend gochujang red pepper paste. “Gochujang hot sauce is the next Sriracha,” he says.

While flavor is important, certain healthful features are also driving interest in the foods of Korea. “Korean cuisine also offers significant appeal to the more health-conscious, clean-eating and generally gluten-free consumers,” says Steven Strickler, general manager of the O’Hill Dining Room at the University of Virginia. “Korean cuisine is largely composed of proteins, vegetables, grains and assorted spices and chiles, making it a much more acceptable option for the ever-increasing number of consumers looking for these dietary options.”

Strickler says another trend is the fusion of Korean flavors into other types of cuisines, as operators add the sauces to other dishes. “Korean sauces offer a complexity of different flavors which are often layered and developed to provide an exciting and broad pairing of flavors in every bite,” he says. “While many Korean sauces do offer a touch of heat, it is often how that heat is paired with sweet, savory, acidity, and how well those pairings enhance the contents of the dish that make Korean sauces such an important component of Korean cuisine.”

Korean food is also known for banchan, the small side orders that accompany Korean BBQ. “The side dishes are a cuisine in itself,” says Joseph Kim, founder of Dae Gee, with four locations in the Denver area. “Not only is the presentation colorful and spontaneous, it just blows your mind when you see all this extra food.”

Dae Gee offers unlimited barbecue such as beef short ribs, pork belly, chicken and other meats, with unlimited side orders of Napa cabbage kimchi, cucumber kimchi, fermented onion, jalapeños and others. Kim says the sauces play a huge role in Korean cuisine. “We think of sauce as something we dip our food in, but with Korean cuisine the sauce, marinade or seasoning is the sauce you prepare your dishes in, even if it is just brining the Napa cabbage.”

Meanwhile, it is easier than ever to create a diverse range of Korean-flavored dishes with ready-to-use sauces such as Sweet Baby Ray's Korean Barbecue and Wing Sauce. Sweet Baby Ray’s Korean Barbecue and Wing Sauce contains the on-trend gochujang hot pepper paste, as well as soy sauce, chili garlic sauce and brown sugar to formulate a balanced sweet and hot sauce. The sauce can elevate chicken wings, Korean fried chicken sandwiches, short ribs and other dishes. It can also be combined with Ken's Lime Vinaigrette to make Korean Barbecue Vinaigrette.

Finally, adding Korean barbecue and other Korean cuisine can be a great way to expand a menu, which can attract new guests looking for the most up-to-date, on-trend flavors.