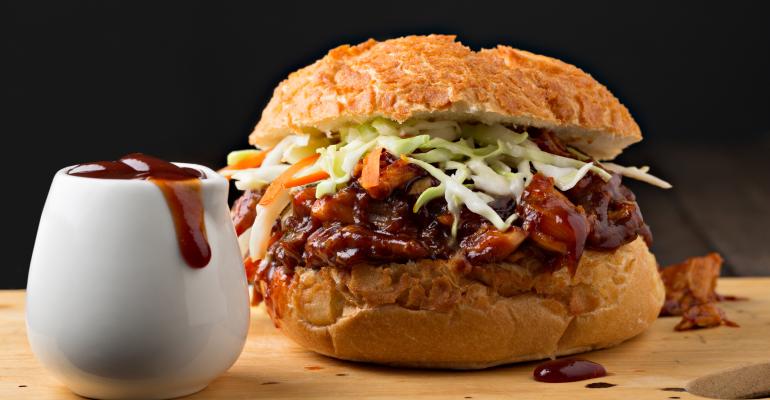 Newer barbecue styles and flavors are among the top foodservice predictions for the year ahead.

One of the great things about America is the diversity of its barbecue heritage. Though long established regional barbecue styles continue their reign, an evolution is taking place around one of this country’s great comfort food categories.

Consider, for example, one of nine foodservice trends predicted for 2017 in Restaurant Hospitality. While the barbecue compass has long pointed to well established barbecue meccas in the South, Restaurant Hospitality says, “Some unlikely barbecue destinations are emerging. Northern urban areas like Cleveland, Chicago and Brooklyn, New York,  have been putting themselves on the map with styles that aren’t so set in stone.”

In Cleveland, celebrity chef Michael Symon recently opened Mabel’s BBQ, which he describes as “Cleveland-style barbecue.” Symon has clearly borrowed barbecue styles from around the country, but he has helped ground the concept using iconic Cleveland ingredients like a locally made ballpark mustard and Eastern European seasonings to create a vinegar-based mustard sauce. You’ll find no tomato-based sauces here.

In Chicago, Barry Sorkin recently opened an outpost of his Smoque BBQ restaurant in the city’s massive Revival Food Hall. “Barbecuing is just a way of cooking food,” Sorkin says. “There’s no way it should be married to just a couple of different flavors of sauce.”

While innovation creates excitement, Mintel predicts that 2017 is a year in which consumers will seek the safety of products that are recognizable rather than revolutionary. “This gives manufacturers the opportunity to look to the past for inspiration, particularly in the use of practices and old family recipes,” says Jenny Zegler, Mintel’s global food and drink analyst.

The genius of Symon and Sorkin is that their creativity is grounded in tradition. Symon is riffing off a South Carolina-style mustard sauce, while Sorkin uses an eastern North Carolina vinegar sauce for his brisket, and a tangy, semi-sweet barbecue sauce for Memphis-style, dry-rubbed ribs. What they’re doing is both creative and traditional.

Savvy operators also know the benefit of staying current in a crowded marketplace. It not only gives a business a competitive edge, it gives customers something to talk about and experiment with. Take, for example, white barbecue sauce. Until just recently most people outside of Alabama had never even heard of a white barbecue sauce. That hasn’t stopped Datassential, a Chicago-based foodservice research firm, from placing white barbecue sauce on its list of the eight hottest food trends for 2017. The vinegar, lemon, mayo and black pepper that goes into white barbecue sauce pairs well with chicken, says Brian Darr, director of TrendSpotting publications at Datassential. At the same time it could just as easily dress roasted veggies or be used as a dipping sauce.

The best chefs always look to tradition as a starting point, but then add their own personality to what they create. Bourbon, a uniquely American product and the country’s only native spirit, is often used as an ingredient in southern style barbecue sauces. How chefs develop that type of sauce may depend highly on their roots. Consider two celebrity chefs — Emeril Lagasse and Bobby Flay. Flay, who specializes in southwestern flavors, uses chipotle chile peppers in adobo to create his bourbon barbecue sauce, while Lagasse turns to his New Orleans connection to add Creole mustard to flavor his bourbon barbecue sauce. A good barbecue sauce can reflect not only a regional preference, but also the preferences of its creator.

A variety of other influences can reflect the direction of a barbecue sauce, not the least of which is seasonality. When the weather warms and peaches ripen, they will often find their way into barbecue sauces. When the time is right, Lagasse will add peach to his bourbon barbecue sauce to create a peach-bourbon barbecue variation, which pairs beautifully with grilled salmon, chicken, pork and any protein that could be elevated with a touch of sweetness. Any stone fruits, including plums, can add a distinctive flavor to a barbecue sauce.

When creating a barbecue sauce chefs will often look beyond America’s regions and to the rest of the world. The National Restaurant Association’s What’s Hot in 2017 culinary survey predicts chefs will “delve deeper into global flavors, both in terms of authentic ethnic cuisine as well as fusions and flavor ingredients.”

Chef Ed Lee, who was raised in New York by Korean parents, found his way to Louisville, Kentucky, where he has been integrating Korean flavors into Southern cuisine at his restaurant, MilkWood. A standout dish there is pork shoulder with “black barbecue sauce,” which combines bourbon — Kentucky is the birthplace of bourbon — coffee, jalapeños, soy and black bean paste. The sauce, reminiscent of a mole sauce, is sweet, spicy and smoky. It’s a crazy cool fusion that reflects several ethnic influences.

While Lee is more freewheeling with his Korean heritage, Jiyeon Lee of Heirloom Market BBQ in Atlanta is taking a more traditional approach to Korean barbecue, which is gaining a legion of fans across the country. There, she offers a spicy Korean pork platter, which is slathered with a Korean barbecue sauce described as “sweet heat.”

Barbecue and its sauces in America are clearly rooted in tradition, but in the years ahead expect a thrill ride of adventurous flavors that will take the category to an entirely new level.