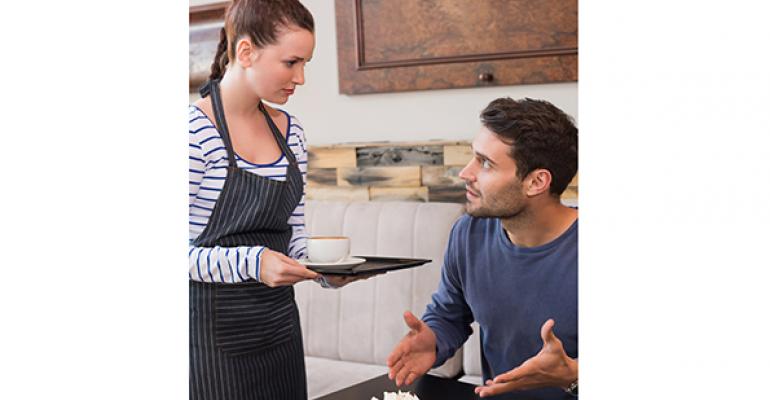 Some service is a disservice

Being in the restaurant business, we have a curious habit of critiquing dining experiences outside our own. Many times we’re visiting restaurants for a birthday, special occasion or night out when we just don't feel like cooking. Other times we are doing due diligence in the marketplace, seeing what our competitors are offering and maybe getting new ideas.

Often we find that the service bar is set too low. Maybe a server is new and just learning the ropes or possibly the restaurant was short staffed in a rush. In any event, training and preparation should rule the day.

Restaurants that compete at the top of their game take training very seriously. They don’t start a new server, host or busperson on the floor without setting clear expectations, having them shadow a veteran staffer for several shifts and then proving their desire and ability to serve the public.

My daughter and I went out to eat in our town the other night. We had many restaurants to choose from, but it all came down to which place had mac ‘n cheese. (As everyone knows, kids often decide where the family will eat.)

Our server approached and first asked if we wanted anything to drink. Here’s where things get interesting. This place advertised a happy hour drink and app special for $7. With my glass of Cabernet, I ordered the grilled shrimp & vegetables over a bed of rice with basil pesto. The server seemed confused by this then mentioned “I don’t think it comes with rice…" She paused a moment then continued, “I think it comes with mashed potato.” It was the best choice, so I said “that’s fine” and we waited.

She brought my daughter’s Shirley Temple and my wine, then said, “Ready to order?” Another “order taker” telling us nothing about what’s special and making no suggestions… this happens far too frequently in restaurants.

We ordered our meals and within a reasonable time, the mac ‘n cheese and my entrée arrived before my appetizer. I was hungry so I thought I’d give it some time to see if the app showed up during my meal. Ten minutes later, our server came back with the obligatory “Is everything okay?”

“Is my shrimp still coming?” I asked. Surprisingly, she said nothing in reply and simply turned around and marched back to the kitchen. In a few minutes she returned and said, “They didn't get the ticket” (I waited a few seconds to see what she would say next) followed by “Do you still want it”?

“It was included in the happy hour special, why wouldn't I still want it?” was what I was thinking, but I politely responded yes and continued with my entrée.  When I finished eating, the shrimp arrived. It was in fact presented over mashed potato, but curiously the pesto had been replaced with sweet chili sauce.

I was in the mood for pesto. This server asked my daughter if she wanted another Shirley Temple, but did not ask me if I would like another glass of wine. My daughter would have liked a dessert, but this was also not suggested. The check was presented and it was obvious to me that the nuances of our dining experience were completely lost on this server, but of course she expected her gratuity.

By contrast, this link demonstrates a bar set much higher.

In instances like these, I always tip appropriately to the quality of the service received and many times I’ll inform the manager on duty when there is a problem. With proper training, this server could have made our father/daughter night out quite special and in so doing, make herself and her restaurant more money. Unfortunately, the service experience fell short and is a perfect example of why training is paramount in this most competitive of businesses.