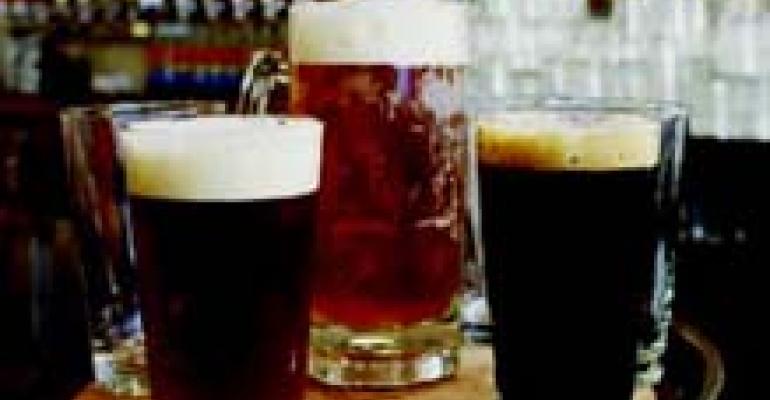 It's easy to surprise people with beer. Give them a bite of old farmhouse cheddar with a sip of San Diego's Arrogant Bastard ale. As the earthy, herbal hops and the sweet malt merge with the smoky, nutty tartness of the cheese a synergy takes over. Eyes roll around. The grand pronouncements begin. "Beer never tasted like that! I thought beer was fizzy yellow stuff. Bitter isn't so bad!"

Not everybody's attracted to a beer with that name, but enough people are that this brewery has found itself on the Inc. 500 list. Beer consumption is up, sales of imported brews are up, and the journeyman American microbrew scene grew by about 3% last year. We're discovering what Germany, England, Thailand, and China have known for a long time: Beer enhances the enjoyment of food.

Surprisingly, many restaurants-across the country haven't yet revised their beer lists in a meaningful manner. With both simple enjoyment and beer-food pairings in mind, here's how you can build a better beer menu.

Variety is a Spice: Offering a more diverse and foodfriendly beer selection in your establishment does not mean installing 30 tap handles and an extra walk-in cooler. Offer beers that encompass a wider range of flavors. The dining experience can be improved, and your restaurant can distinguish itself from competitors.

The basic forms of beer are lagers and ales. Lagers are smooth, often golden colored beers which do not possess fruity complexities. American versions tend to have neutral flavor profiles, while European and Asian examples may exhibit bready malt and herbal hop aspects. Most offer a crisp finish with little to no aftertaste. Like white wines, these beers pair well with chicken, seafood, salads and potatoes. These beers sell themselves due to consumer habit and brand loyalty.

Ales are the other sort of beer. They usually have more body, possess more noticeable fruity aromas and flavors, and offer a greater depth of ingredient nuances. Ales are more like red wines, adapted to cheeses, meats, and fruity or chocolatey desserts. In complementing the charred flavors of grilled or braised meats, brown ales, such as porters and abbey ales, cannot be beaten.

The champions of food pairing are traditional ales such as the German hefeweizen, the Belgian saison and the French bière de garde. Originally farmhouse beers, credible examples are now produced by microbreweries across America. These beers, often made of both barley and wheat, present a variety of flavors.

Ten Beers to Bank On: Most beers consumed in this country are light American lagers with indelible brand loyalty. Know the top three or four brands in your region and stock them. "You've got to do the macros [Bud, Miller, or Coors], definitely a Bud Light or Coors Light, a low carb beer right now, gotta do Guinness," says Ron Kloth, president of Scottsdale, Arizona's upscale beer bar, Papago Brewing Company. Consumer tastes evolve over time and you needn't be a hero on a beer crusade.

Second, consider what beers would traditionally be served with your cuisine. Mexican food deserves lagers such as Bohemia or Negra Modelo. Indian restaurants should offer and Indian lager and a hoppy British pale ale. German pilseners are a natural for roast chicken, bratwurst, and pickled herring¯just ask the six million people who attend Oktoberfest each year. Try to include a variety that spans from neutral to malty (sweet) to hoppy (bitter).

Ales really resonate with seafood, burgers, and salads. Seattle, Portland, Chicago, Boston and Philadelphia all support thriving craft breweries and many restaurants serve the local suds. At Tiernan's Restaurant and Irish Pub in downtown Boston, the selection of nearly 20 taps includes 10 hoppy ales. The rest of the draft lineup includes light American and European lagers, stouts, a wheat beer and a cider.

At Denver's Wolfgang Puck Cafè, sommelier and general manager Bryan Kaump recognizes Colorado as a microbrewing capitol. "That plays a huge part of the dining scene in Denver," he says. His new beer list includes local favorites, major name lagers, and classic imports like the Czech Pilsner Urquell, and Guinness. "You should have the balance of both [craft and major labels] and move them in and out over a few months. We can't be such snobs as not to recognize that."

Tucson's Le Bistro chefowner Laurent Reux offers nine bottled beers at his upscale French restaurant, including the digestive Duvel ale from Belgium. Chef Reux says offering beer with dinner is traditional in Europe. The bitter and refreshing Duvel is a perfect opener for blackened scallops or a Caesar's salad.

In putting together your new beer menu, consider the audience, the staff, and the ambiance of the restaurant. For a casual dining or sports pub atmosphere, select four or five specialty beers out of ten. For an upscale restaurant, up to seven or eight imports and microbrews can be offered.

Better Beer Challenges: Beer requires more attention in storage and handling than wine. Stocks should be rotated with careful attention. It is best to purchase beer that has been refrigerated since it left the brewery.

Some restaurants find it easier to deal with a single distributor for all of their beer. While this is convenient, it may result in limited selection, often favoring the products of a single global lager producer.

You will also find that variety depends on your location. Some cities may have a broad choice of products from numerous distributors. In other areas, beer distribution may be under a near monopoly, forcing beverage managers to shop farther afield for the best selection. In so-called "three tier" states, restaurants and importers need to work together to pressure distributors into carrying a brand.

Draft beer requires that the serving lines between the kegs and the taps must be maintained by periodic cleaning or stale flavors will result. Some distributors offer line cleaning as part of the sales and service, while others contract with third party maintenance firms. Bar staff can also be trained and equipped to perform this important task. Remember, there's nothing wrong with bottles.

Promoting a Better Beer Menu: As anyone in the restaurant business knows, it isn't enough to offer great food, beverages, and ambiance. Success requires promotional elements as well. Once you have revamped your beer list, educate and inform your staff and customers.

Staff training usually takes the form of guided tastings, with the beverage manager, chef, or beer product rep. Often these are held at the beginning of the shift. Tastings should be regular events covering both beer basics and some of the products you are currently promoting. Food menu items which are well suited to certain beers can be sampled to demonstrate contrasting and complementary flavors.

Waitstaff should be encouraged to develop several comfortable, natural table approaches to offer beer selections with coordinating dishes. Beer is an adaptable beverage that can be discussed either casually or formally, as it suits your establishment.

Promotional approaches can range anywhere from branded neon signs, banners and table tents, to the more subtle proposition of suggesting beers alongside food selections on the menu. Customers who are choosy about beer will look for indications of premium beer when they are deciding on a dining establishment. Working with tourist boards, convention centers, and concierges will help bring attention the better beers, according to Puck's Kaump. Reaching out to beer savvy customers may also involve mentioning key brands in print ads, conducting product promotions, and featuring the beer in publicity opportunities.

The so-called craft beer revolution in America has spanned the last 20 years. In that time the public's awareness of finer beers has gone from a gee-whiz astonishment to the beginnings of erudite selectivity. Aside from major label marketing, popularity can emerge from hometown pride or, as in the case of Wolaver's Organic Ales, concern for healthfulness.

Above all, remember that beer gives us a chance to make discoveries at the dining table, along with a having a little fun. Cheers!