What makes it special: World War II Purple Heart recipient Bertino was a longtime employee for the family owned Garden Catering chain, known primarily for its chicken nuggets. Co-owner Frank Carpenteri Jr. said Bertino worked well into his 90s (he died in 2012) and was well known and loved in town for his chili, made with a secret recipe and served since 1944. Named for him, The Hotsy sandwich was initially a breakfast dish featuring the typical egg, bacon and cheese combination. But Bertino would also layer in “potato cones,” which were fried potato balls, and top it with his famous chili. Wrapped in foil, the sandwich travels well and it has helped Garden Catering keep up a thriving takeout business through the pandemic, said Carpenteri.

What makes it special: This sandwich resembles a frankie — street food popular in Mumbai for which roasted meats are wrapped in flatbread and eaten on the go.

The dry, even, high heat of Choolaah’s 600° tandoor oven brings out the spices in the marinade and seals in the chicken’s juiciness. That flavor is enhanced with freshly sliced red onions and signature sauces developed for the sandwich, which might include a medley of mint, cilantro, creamy tomatoes, mango, ginger, onion, garlic, yogurt and a custom blend of spices.

Seasoning the naan itself brings another dimension to the sandwich, which is a great example of how accessible Indian food can be in a fast-casual setting.

Down the Hatch, Lahaina, Maui, Hawaii

What makes it special: This showstopper starts with thick slices of sweet Hawaiian bread that’s spread with mayonnaise and grilled to give it a crispy, grilled-cheese-like texture, creator Javier Barberi said.

“It’s got a lot of really nice, dynamic things going on,” he said, with chunks of lobster and crab, cheese and a beurre blanc sauce. That richness is offset by tomatoes, and the sandwich gets some crunch with shredded cabbage.

This is a bar-food sandwich, and it’s cut into four pieces for people to share. It’s Down the Hatch’s best seller and has won awards for being the best sandwich on Maui.

What makes it special: This sandwich has several distinctive elements that separate it from the growing pack of Cubanos now available in restaurants across the country. That includes the pork, which is marinated, roasted, cut into squares and then browned in oil to make it crisp. The onion is marinated for at least two hours with orange, lime and habanero pepper to add sweet-and-spicy elements to the sandwich, which also has creaminess from the avocado and soft textural elements from the Swiss cheese and roasted red pepper.

What makes it special: The chicken is prepared Nashville-hot style, fried and dredged in spiced oil and then a blend of spices. It’s a large sandwich really designed to serve two — hence the price — but early on guests who were able to eat the whole thing alone earned a t-shirt and bragging rights. Lindsey said the presentation is what makes it. When the sandwich comes to the table, out come the phones to post on social media.

What makes it special: As the restaurant reopened post COVID shutdown, Raffin wanted a vegetarian option that tapped different styles of umami. This sandwich uses sharp cheddar in the place of the more typical chicken for a katsu-style fried-cheese patty. Mustard is mixed into the egg wash to add acidity. The cheese mixture is frozen, breaded with panko, then frozen again and deep fried to order. The restaurant makes its own brioche buns with potato chips and sesame seeds embedded in the crust. The toasted buns are buttered with miso mayo, topped with the katsu cheese and layered with kimchi, as well as lettuce and red onion.

What makes it special: It could be ungainly to use two grilled cheese sandwiches as the carrier for another sandwich, but creator Alex Martinez solves that problem by using thin, griddled quesadillas.

They hold thick pieces of luscious pork belly dressed in tomatillo salsa, along with a mashup of a Latin ingredient and a classic dish of the American Southeast with a fried green tomatillo coated in seasoned cornmeal — a multicultural sandwich well-suited to South Florida.

What makes it special: Created initially for a food festival in 2017, this Instagram-able sandwich has created its own following. Now served primarily on the weekends because it’s a challenge to produce, the grilled cheese incorporates ramen noodles, as well as garlic sauce, kimchi, corn, jalapenos and a tangy house red sauce. The cheese is a mix of shredded cheddar and provolone, which Ho said gives it a nice “pull.” 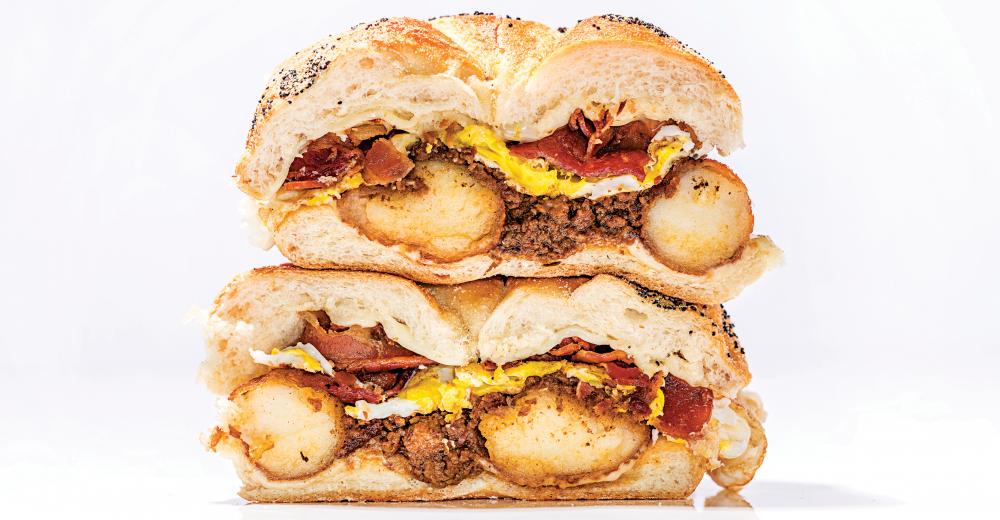 Next Up
Want to up your sandwich game? Try these 4 tweaks
Start Slideshow ›