In keeping with Barton G.’s famously theatrical presentation, this dessert for a group features 24-karat gold “savage” red velvet cheesecake filled with cream cheese frosting, white & dark chocolate ganache over 24-karat gold candy glass. The dessert is wheeled in on a seven-foot crane, a wire is cut dropping the cake through the candy glass table

A tribute to the very first movie shown at the iconic Esquire Theatre, “The Firefly,” in 1938. Served on a black plate playing backdrop as the night sky, the lemon gelato tartufo signifies the moon while the yellow candies symbolize fireflies dancing in the moonlight.

Salted crème brulee, with bits of cherry cake, whipped cream. A spin on the classic dish, but this one is gluten free, made with rice flour.

Secret blend of cheeses, honeycrisp apple, ginger, hazelnut, chow mein noodles. The dessert is presented as a wedge of Swiss cheese with a mouse chasing it — tail and all. The dish itself is a nod to NYC’s affinity for cheesecake.

A smooth butter cake is given texture with crushed pistachios and spice from cinnamon that pairs with a light orange glaze on top for a balance of sweet and spice.

This local winner of best dessert in San Diego three years running is a classic. It’s served with caramel corn as a compliment. And both ginger and yuzu are used in the cream cheese icing , which gives it a Japanese flair that ties it to the restaurant’s menu.

Better than Sex, A Dessert Restaurant

Chocolate cake, caramel and hazelnut crunch in a pinecone-shaped shell on a plate garnished with pistachio “moss” and crumbled cake to resemble the ground.

This meringue dessert is presented on ribbons of carrots with pecans.

This gorgeous mini Honey Lemon Cheesecake is garnished with lemon, honey and honeycomb. 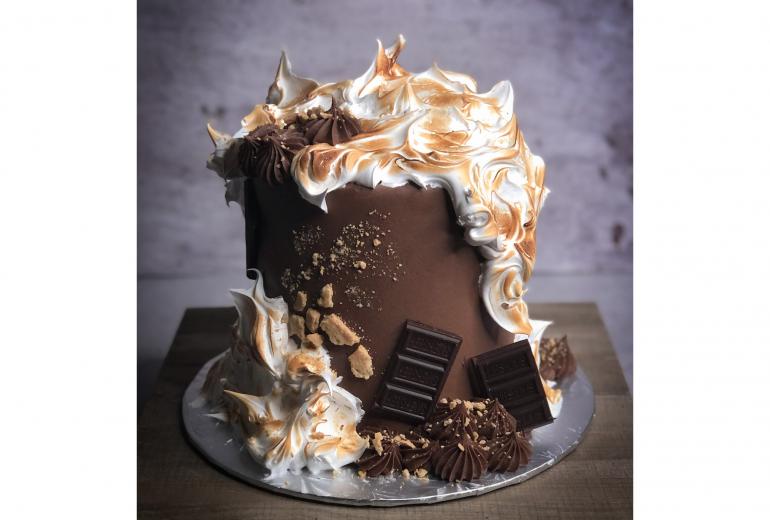