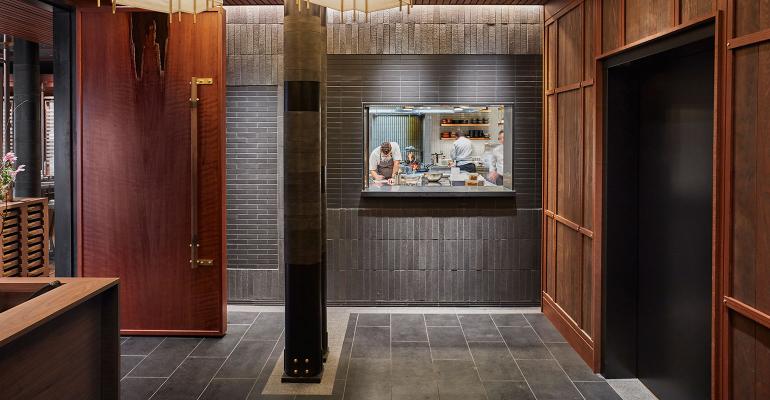 Photo: Garrett Rowland
At Single Thread, technology is layered throughout the concept, but kept hidden from the view of guests. The goal is to convey effortless hospitality.
Operations>Back of the House

How technology is reshaping back of the house design and function

When it comes to creating a unique hospitality experience, Chef Kyle Connaughton is a believer in blending old and new.

At Single Thread, his restaurant, inn and farm in Healdsburg, Calif., he uses ancient techniques, like cooking over an open fireplace hearth or preparing meals with hand-crafted Japanese earthenware donabe, the same way chefs have cooked for hundreds of years.

Yet his kitchen also includes a sophisticated four-zoned electric plancha; energy-efficient vent hoods that sense when and how much they need to turn on; and refrigeration systems with compressors and condensors banished to the roof to eliminate heat and noise. Single Thread technology features:
• Energy-efficient vent hoods that sense when and how much they need to turn on
• Refrigeration systems with compressors and condensers on the roof
• A four-zoned electric plancha
• Video feed and slack channel to keep in touch
• Lights in the dining room that shift with course progression
• Directional speakers over tables to create curtain of sound
(Photo: Garrett Rowland)

In fact, throughout the restaurant — but hidden from view of guests — Single Thread is layered with technology designed to enrich the experience and create efficiency.

In the kitchen, which is almost entirely open to the dining areas, Connaughton has a bank of screens that diners cannot see above his head. There, he can watch video feeds from the entire property, as well as a Slack communication channel where kitchen and staff stay connected with Apple watches and iPads kept stealthfully out of view.

Single Thread’s use of technology may be out of reach for most restaurant operators today. But it also may well be the way of the future for the industry, with restaurants rapidly becoming technology companies.

Much in the industry has focused on guest-facing tech, including features like third-party delivery, mobile apps to order and pay and touch-screen kiosks or terminals.

But behind the scenes, technology is also reshaping how restaurant kitchens are designed and how the front and back of the house interact.

For Connaughton, the state-of-the-art venue that opened in December was designed to be efficient and practical with good ergonomic flow.

But, even more, the goal was to convey genuine hospitality, he said.

Technology became a tool that allowed the restaurant to communicate that level of hospitality effortlessly.

“We wanted people to feel like they’re coming to our home. This is a dinner party atmosphere and we’re here to help you feel taken care of,” said the chef. “Things seem to quietly and effortlessly happen around you. If the guest notices nothing happening around them, then we’ve done our job.”

For years equipment manufacturers and designers have been predicting the arrival of the internet-of-things connected restaurant kitchen, one where appliances sync to the cloud, equipment is accessed remotely, the daily grind of temperature monitoring is fully automated, and ovens that are about to fail send warnings to management or message for replacement parts.

Such equipment exists, and is coming down in price — though much is likely still too expensive for most independent restaurant operators.

There have been challenges as equipment becomes more high tech, said Charlie Souhrada, vice president, regulatory and technical affairs for the North American Association of Food Equipment Manufacturers, or NAFEM, in Chicago.

Among them is the lack of a common platform that would allow disparate pieces of equipment to connect.

“That was important because, at least historically, operators were being bombarded with proprietary or stand-alone communication standards, and they wanted one set of rules that described how appliances could talk to computers,” said Souhrada.

NAFEM launched a data protocol in 2003 designed to set a standard for how that communication could take place. Over the years, as technology changed and operators offered feedback, that protocol has evolved.

Manufacturers, meanwhile, have largely continued to do their own thing when it comes to data transmission. The result is much variation, including fundamental aspects, like whether data is transmitted on cellular platforms, via Internet, wirelessly or not, or even by thumb drive.

Still, operators are slowly integrating technology into their operations in ways that will increasingly break down the wall between front and back of the house.

In the past, those who purchase kitchen ovens and or refrigeration systems have not always been on the same page as those building information-based technologies, said Souhrada.

But equipment is increasingly emerging to bring those parties together, he said. “I’m seeing more equipment than ever before with a USB port. That’s exciting. It also demonstrates that equipment manufacturers are seeing a need.”

“Mechanical and refrigeration systems are huge power users and the more efficient you can make them, the better off you are,” he said. “And one of the things I detest is noise in the kitchen, and a great deal comes from the mechanical systems.”

Harrison worked on Single Thread and has been part of the design team for some of the country’s top restaurants, including Benu in San Francisco and The French Laundry’s recent kitchen upgrade.

At Single Thread, for example, Harrison made the walk-in refrigerators more the size of reach-ins to boost efficiency, with units devoted to specific products — one for produce, one for dairy, one for meat. That allowed for more specific temperature control.  The condensers and compressors remoted to the roof pull that heat and noise out of the chef’s workspace.

Similar refrigeration units can be found at The French Laundry, he said. But there, Harrison worked with manufacturers to create a self-monitoring refrigeration system that gives digital reports on temperatures and sends alerts when there’s an operational problem. A revamp of the kitchen at The French Laundry utilizes refrigeration equipment that can notify workers. (Photo: Snohetta)

“We created a system that would notify selected individuals,” said Harrison. “On their iPhones, a message would come up that says ‘unit No. X is not operating properly.’”

That notification allows the recipient to research the problem before they call for service, which is always costly, he said.

“Those guys don’t do things for free anymore,” said Harrison. “And it could just be that the door wasn’t closed.”

That kind of intelligent equipment is becoming more available to operators, and not just on the high end, said Harrison.

Combi ovens can be programmed with specific recipes, for example.

“If you have a new cook on the line and he doesn’t know a recipe for something that goes in the combi oven, you can program it in and just tell him to hit number. 7,” said Harrison. “Most major manufacturers have something along those lines now, and I think that’s very productive.”

At the National Restaurant Association convention in Chicago earlier this year, the kitchen technology evolution was clear.

Restaurant Technologies was touting a fryer filtration monitoring system that tracks the flavor and quality of cooking oil, for example. Details about filtration practices can be monitored through a custom web portal and managers can get alerts when standard operating procedures are not being followed. In fact, food safety is one area that puts an operations and purchasing team on the same page.

The sensors give a temperature reading every 30 seconds that is transmitted to the cloud, replacing what was previously a tedious daily chore of checking temperature readings, and keeping paper records, to make sure ingredients were being properly stored.

“Now I don’t have to calibrate my thermometer every morning,” he said. “I don’t have to worry about losing papers, or getting them wet, or it not being readable. When you have to do it four times a day, seven days a week, that time really starts to add up.”

Managers can get alarms if temperatures fall out of a safe range, and for how long.

The system also prompts a response, said Bambry. “If it’s not at temperature, it asks ‘What do you want to do? Throw it away?’ It forces you to make a decision and everything’s tracked in the report.”

And if a health inspector asks for temperature readings going back in time, the data is readily available.

“It keeps everything saved in the cloud so we can go back and pull reports for any time, any day, or for multiple years,” said Bambry.

Keeping the needs of guests in mind

Single Thread, meanwhile, is an example of a restaurant that has integrated technology more holistically throughout operations.

From the moment guests arrive, Single Thread’s staff already knows much about them. The restaurant only offers a new prefix chef’s dining menu every night. Because tickets for the experience are handled through the digital reservation site Tock, guests have already been asked about meal preferences and allergies. They have also been offered concierge services, like arranging a car or wine tasting.

“Use of that technology allows us to create that dialog and makes them feel like they’ve already started that relationship with us,” said Connaughton.

Guests begin the evening with aperitifs and canapés on the restaurant’s third-floor garden rooftop. That’s often a point when guests will reveal last-minute requests or modifications to servers, and those requests are communicated immediately via Slack to the kitchen.

“If they don’t like oysters, for example, I really want to know. Because otherwise they’re probably going to get an oyster,” said Connaughton.

“Now we can say conversationally that, when 17 comes down, she has asked to go gluten free, or when this other table comes down we’re going to have a certain bottle of wine ready for them. It cuts down on the verbal communication needed,” he said. “If we didn’t have that technology, we could never do what we do.”

Knowing that the kitchen is watching by video stream, staffers use certain signals to cue timing — either hand signals or a tray might be placed a certain way to indicate something is about to happen.

As a result, when guests are brought down to the dining room, they can be greeted at the elevator by name, or perhaps wished a happy anniversary. They are then brought to their table where the first course is waiting. At that point, the sommelier will already have been alerted about their wine choices via Apple watch.

As the meal progresses, the lighting in the dining room changes subtly through the course of the evening, calibrated by the sunset and season. Carefully programed music is played from directional speakers over each table designed to create a curtain of sound.

These are touches that enhance the sensory experience, said Connaughton.

“But nowhere on the property will you see us interface with that technology,” he said. “We don’t see computer screens, or terminals, or phones. It’s all hidden.”

Connaughton’s kitchen, meanwhile, is geeked out with state-of-the-art combi ovens, controlled vapor technology, induction water bath systems and more. Next on his wish list is a centrifuge and a blast chiller, he said.

Despite his tech leanings, Connaughton does not see himself as a modernist, though he worked previously as a chef at the three-Michelin-starred Fat Duck in England, which is known for playfully inventive molecular gastronomy. Connaughton also spent years in Japan as chef at the Michel Bras restaurant there.

“I have seen both extremes,” he said. “I have worked in restaurants that are hundreds of years old, and you feel like you’ve stepped back in time. All the way up to working for Michel Bras in a hotel property that was incredibly modern.

“Here, we blend things together. It’s a real blend of traditional and modern, we don’t sit in one camp or the other,” he said. “It’s a matter of results.”

Why chef Ashleigh Fleming got back into the kitchen
Sep 29, 2021

Worried about airborne transmission of COVID-19? Here’s what restaurants should be doing to sanitize indoor air in the dining room
Oct 30, 2020