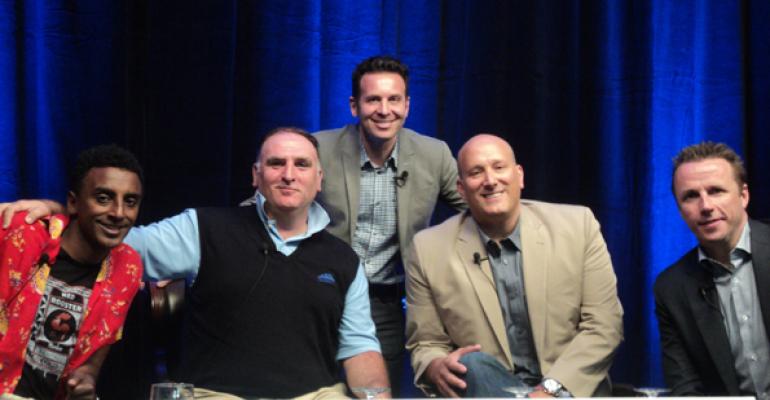 How restaurants can leverage cause marketing

Restaurants are asked by many charities for contributions — generally by far more than they are actually able to help. However, developing the right partnerships with suitable organizations can help keep restaurant employees enthusiastic and improve sales, as well as help people in need.

Strategies for achieving those goals were discussed in a panel titled, “The Power of Partnership: Cause Marketing,” moderated by Steve Dolinsky, food correspondent for ABC-7 in Chicago.

Joining Dolinsky was José Andrés, head of ThinkFoodGroup in Washington, D.C.; David Gordon, President of The Cheesecake Factory; Marc Murphy, who operates five restaurants in New York City; and Marcus Samuelsson, owner of Red Rooster in New York City and founder of 3 Goats, which works to provide families in Samuelsson’s native Ethiopia with sustainable access to clean water and education.

Murphy, who was recently named Humanitarian of the Year by hunger relief organization Share Our Strength, stressed the importance of focusing the time and resources for charitable causes to those to which you are deeply committed. “You have to learn to say no nicely,” he said.

He added that you should look at how a charity can help your business. “Big companies do off-sites or team building,” he said. Instead, he gets 12 to 15 employees to work at an event for Share Our Strength or New York hunger organization City Harvest. He said it’s a great way for people to feel like they’re part of the team, and to feel good about that team.

Gordon pointed out that Millennials, who make up a large part of The Cheesecake Factory’s staff, take charitable acts more importantly than any previous generation, and it’s important to make them feel good about the company that they work for. To that end, not only does the casual-dining chain work with hunger organization Feeding America, which gives to food banks across the country, but it also gives matching funds to local causes that team members choose to support.

“When that happens, we talk about it across the country, we put it in the newsletter, we make [those charities] important to us.”

Andrés is a big supporter of DC Central Kitchen, which not only collects and cooks food for people in need, but trains local people to work in those kitchens and be productive members of society, and when they graduate from those training programs he hires them to work in his restaurants.

That model was the inspiration for World Central Kitchen, which he founded to create businesses that feed and train people, such as a bakery that he founded at a Haitian orphanage that helps raise money for them as well as teach them marketable skills — “not throwing money at the problem, but trying to invest in solutions,” he said.

Samuelsson, who was born in Ethiopia and, with help from the Red Cross, was adopted at age 3 by a Swedish family, said his awareness of his humble beginnings inspire him to support the United Nations Children’s Fund as well as his Three Goats organization and the Careers through Culinary Arts Program, or C-CAP, which trains at-risk youth to work in foodservice.

C-CAP has helped Samuelsson hire the bulk of his staff at Red Rooster, which is located in Harlem, locally. “You go from a charitable cause to a source for new employees,” he said.

Choosing a suitable charity is important, the panelists agreed. Gordon advised using as much diligence when researching charities as when negotiating with vendors. He suggested speaking with others who had worked with those organizations, making sure they’re financially stable and that the funds they’ve raised have gone to where they said they would.

He said The Cheesecake Factory spent up to six months researching Feeding American before partnering with the charity.

Samuelsson also advised checking on the board members of organizations you choose to support, a subject he returned to as the conversation shifted to how nonprofit organizations can help restaurant partners.

Dolinsky pointed to Shake Shack, which gave vouchers for free milkshakes to people who donated $2 or more to Share Our Strength. The high redemption rate brought more guests to the restaurants, Dolinsky indicated.

Samuelsson suggested asking board members of charities you support to patronize your restaurant on their own. “I think that’s a fair trade,” he said.

He also said that organizations such as C-CAP, which can improve the job prospects of people whose options might otherwise be limited, change potential problems into good employees. “Young kids can either cook for you or steal your car,” he said.

Gordon said that The Cheesecake Factory’s charitable work is part of what the company is, and as a result helps with engagement and retention with employees. Although the company doesn’t overtly talk much about its charitable acts, “it’s amazing what gets picked up on social media.”

How to recruit, train and retain top restaurant employees
Jun 14, 2013