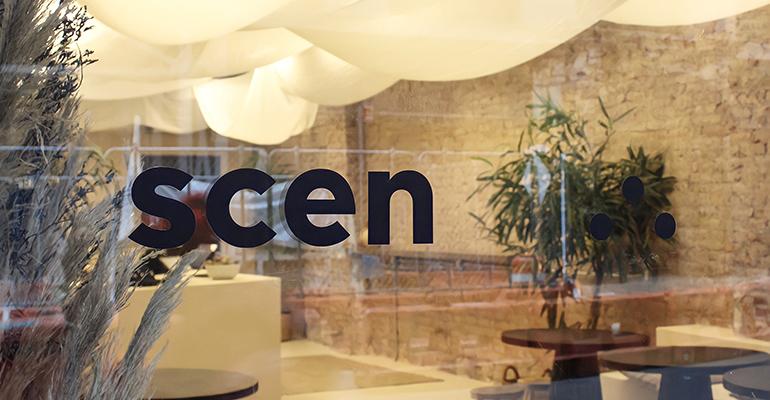 At Scen, sustainability is the top priority, from food to packaging

A new farm-to-table concept called Scen opened recently in New York City and is funded by plant-based celebrity chef and restaurateur Matthew Kenney after a well-timed direct message on Instagram from a 23-year-old entrepreneur.

Scen was developed by founder Maximillian Koenig, who was drawn to plant-based eating after his grandfather became sick with several diseases a few years ago. Koenig, a native of Germany, fell into a spiral of research. While he was working on his thesis at university, a professor at Cornell University convinced him the solution could come from plants.

Changing his diet saved Koenig’s grandfather and it improved the young entrepreneur’s health. It also informed his thesis, and that project eventually became Scen.

Koenig, who is 23, was looking for funding and he reached out to Kenney — a restaurateur with plant-based concepts around the world — on Instagram, a move Koenig now describes as naïve rather than brave. Kenney is known for concepts such as Double Zero, Plant City, Make Out and more.

But the student found a kindred spirit. Kenney is now a backer of Scen.

“This is a time of exponential growth for the plant-based market. People are realizing that they need to take care of themselves more than ever, in a way that is sustainable and pleasurable,” Kenney said in a statement. “We continue to see a real shift in the restaurant industry, which has been something I’ve been working toward for a very long time.”

Scen — pronounced “zen” but meaning “stage” in Swedish — is designed to serve as a stage to present plant-based foods and other solutions.

“The restaurant is kind of the first initial chapter of trying to make nutrition for human and planetary health more accessible,” said Koenig.

“I would consider myself an activist rather than a businessperson,” he added. “I just think that businesses are great tool in initiating change and doing that in a very beautiful aesthetically pleasing way that can benefit society on like a number of levels.”

The design of the restaurant is dubbed “Japandi,” meaning the combination of minimalist Japanese and Scandinavian aesthetics.

Muted colors and relaxing elements make the physical space seem calm and “like a friend’s living room,” said Koenig. The food is served out of luxurious stoneware bowls, potluck style.

“What we set out to do is how can we possibly supercharge human beings through every touch point of their day? And what goes into the food is basically the principle of every single ingredient is healthy,” he said.

There are no fake meats here. Ingredients are sourced locally from the nearby Union Square Farmers Market, or sourced from Japan.

Koenig reached out to a series of scientists, nutritionists and researchers from across the country to not only help craft the menu but build in elements of a circular production, ensuring that every point of the menu had a return point where something was recycled and reused.

Bowl ingredients range from tempeh and chickpeas, to sesame golden beets and radishes over brown rice, quinoa or other options. Bagels might be topped with ingredients like roasted squash, macadamia ricotta and pumpkin seeds, or cream cheese and carrot lox are also available. Each bowl costs $14 and bagels are each $6.

The fast-casual restaurant is open for breakfast, lunch and dinner.

But it’s not just the food that’s made from plants – it’s the packaging too.

The packaging is made from plants and is colored with algae. It’s produced using wind energy, and so it “captures more CO2 than it emits in the process,” Koenig contends, adding that it is fully compostable after 90 days.

“I would consider us to be plant based or vegan on every single level and that is obviously also going into the packaging, so the packaging that you're that you're seeing at the retail store, everything is made out of plants,” said Koenig.