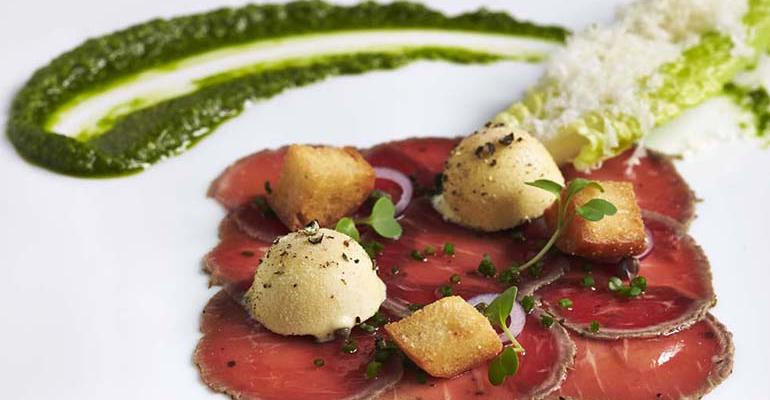 The Inn at Little Washington
People>Chefs 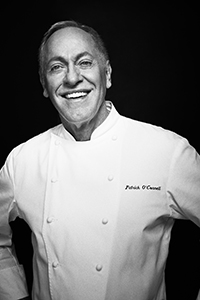 If you want to talk to someone about “Mad Max,” “Ferris Bueller’s Day Off” or “Raiders of the Lost Ark,” don’t ask Patrick O’Connell.

Within a month of opening The Inn at Little Washington in Washington, Va., in January of 1978, a review in a Washington, D.C., paper brought hordes of people he wasn’t ready for to his restaurant that occupied half a garage in the center of the remote town he’d decided to call home.

Related: It ain’t easy being truly seasonal here, but this chef does it

“The first line was, ‘Once in a great while there comes along a restaurant that’s so good, you worry,’” O’Connell recalled from memory. The review said it was the best restaurant in a 150-mile radius of D.C.

“We were engulfed,” the chef said. “The review came out toward the end of the week. We opened on Sunday at 4 o’clock, and by 11 a.m. people were all over the front porch, sort of pushing and shoving. It felt very much like a nightmare.”

They were lined up for food the likes of which no one had seen before in an American restaurant: Pokeweed — normally just eaten in the homes of local mountain folk — in hollandaise sauce, seared bay scallops in sweet and sour beurre blanc with local wild honey, sassafras crème brûlée.

“For 10 years it felt as though there wasn’t time to look up,” he said. “I just had to cook faster and faster.”

And all of those now-classic movies of the ’80s passed him by while he and his small team of local home cooks developed items like duck skin chips, called “quackers,” glazed in soy, ginger, honey, garlic and five spice, lamb carpaccio with Caesar salad ice cream, and a dish of seared foie gras over cold black eyed peas with salad greens and balsamic vinegar pan sauce served over local country ham and smoked goose breast.

He told me the origins of the dish:

“Every New Year’s, everyone around here eats black eyed peas. So we had an older African American woman in the kitchen who always would make a pot of black eyed peas with ham hocks.”

O’Connell was too busy to eat it hot, and when he tried it cold he found it to be lighter than when it was hot. He added salad greens and liked it even more, and he continued to evolve it from there.

“The feeling that I’ve always wanted to evoke for our guests here was that they were coming to someone’s private home in the country, not a concept restaurant that was ‘farm and table’ and/or ‘farm and fork’,” he said, slightly flubbing the overused term “farm to table,” which really underscored his point.

O’Connell’s a self-taught chef, having started working at a takeout restaurant in the D.C. area at the age of 15, “when I got tired of getting bitten by dogs on my paper route,” he said. “I loved it, instantly. Everything about it. It was exhilarating.”

And the restaurant owner was impressed enough by him that he refused to hire him the following summer.

“He said, ‘You’ve gotta work at a better place, kid. You got talent,’” O’Connell said. “‘I have a friend who runs a restaurant with tablecloths. I’ll give her a call.’”

He continued to work in restaurants while studying theater in college, “but I found what I later called the living theater of the restaurant world more exciting in every way,” he said. “And more challenging. … It draws on every single faculty that you have, and you’re learning every hour. You never stop.”

Before long, his English professor took him out to lunch — Chinese food, one of O’Connell’s favorites — and told him he was wasting his time in school.

“He said, ‘Don’t you get what Thoreau’s been trying to teach you? You should be out somewhere exploring the world. You have talent.’”

So he booked steerage transport on the SS France and, with the $1,000 or so he’d saved while working in the restaurants, managed to stay there for almost a year (Europe was “very cheap” in the late 1960s, he said).

“My mind changed completely about a career in food, partly because of the sense of reverence that the French culture placed on chefs and all things related to restaurants and cooking. Just to see a crowd of people gathered outside a pastry shop window looking at the creations in a state of awe was something I had never seen before or even imagined.”

He cooked his way through Julia Child’s “Mastering the Art of French Cooking,” following each recipe three times before doing his own riffs on it, borrowing from Italian, Greek, Chinese and other cuisines.

When he and his then-life partner Reinhardt Lynch expanded their fledgling catering business into a restaurant, local products were incorporated out of necessity.

“Because nothing was delivered here we had no option but to cook as much as we possibly could from the immediate region around the backdoor of the restaurant,” he said.

And soon he discovered that all of his neighbors had something to offer — rabbits or stone fruit or mushrooms.

“Initially they’d bring zucchini the size of your leg, and I would have to explain to them that I was looking for [zucchini] around the size of my little finger, with the blossom attached, and that was just plain weird to them,” he said.

But they learned, and so did his customers.

“At the time there weren’t any bragging rights attached to where stuff came from, but people were able to recognize that they’d never tasted a more delicious strawberry in their lives, or a more fragrant peach,” he said. “The food just started to taste better than what they were accustomed to in restaurants anywhere in the U.S.”

Forty one years later and the restaurant’s menu is still evolving.

Now there’s a separate vegetarian menu with entrées such as a “filet mignon” that replaces beef with “wonderful, big, meaty beets” from the restaurant’s farm, with steakhouse accompaniments, such as pommes soufflées and creamed spinach, as well as an ever-changing seasonal menu called “here and now” with items this past summer including tuna with foie gras confit in black truffle vinaigrette and cashew-crusted soft shell crab tempura with green papaya, cucumber and bean sprouts.

Recent dessert items include Apparently a Pear — a pear cheesecake shaped like a pear with almond brown butter cake and Amaretto sabayon.

And O’Connell still loves it.

“There is a daily kind of challenge. Every single day something goes wrong behind the scenes, and that has to be kept from the guests. That kind of stress that everyone’s going through can’t be seen, and that’s what’s fascinating, I think,” he said.

He said that dual theater — “the illusion and the fantasy going on in the dining room versus the blood-and-guts reality of behind the scenes, what it takes to make it look effortless” — is depicted in a new documentary about The Inn at Little Washington that premiered at the Virginia Film Festival in October.

Called “The Inn at Little Washington: A Delicious Documentary,” it’s slated to air as prime-time programming on PBS in the first quarter of 2020.

Although there doesn’t seem to be anything O’Connell doesn’t love about his job, perhaps his favorite part is spotting and developing the unique talent that’s necessary to be great at a restaurant job.

He said our culture tends to undervalue restaurant jobs, and people who enter that world are “made to feel that anybody can do what you do, and you’re doing it because you couldn’t succeed at something else … but to serve others and to do it well requires talents and faculties way beyond what most ‘normal’ people have.

“It was spotted in me, and I think unlocking someone’s secret potential is a wonderful, wonderful feeling,” he added. “Also, I find that young people may not yet be aware that they’re food people. But they have a palette, they have a curiosity … and you can develop that, and then they get on a sort of a fast track. I’ve seen it happen so many times. There are no accidents; they didn’t just fall into the backdoor. They were pulled here for a reason, and it’s still taking place every day.”

The name of the documentary about The Inn at Little Washington has been corrected.
TAGS: People
0 comments
Hide comments
Related