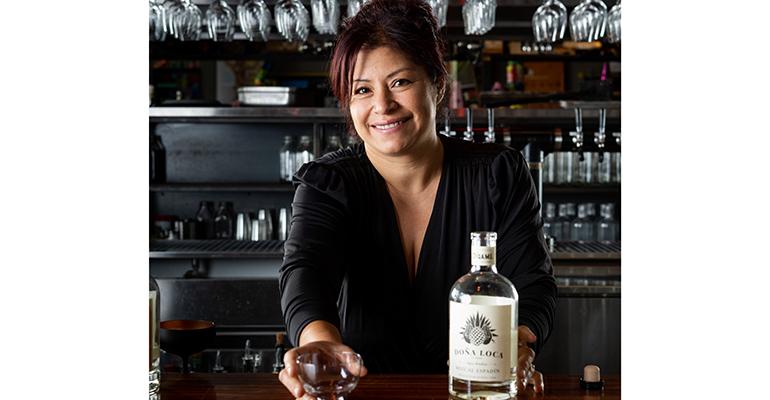 Not only does Chef Dana Rodriguez create tasty Mexican food at two of her Denver restaurants, Super Mega Bien and Cantina Loca, but she makes tequila and mezcal for each.
Trends>New Restaurant Concepts

Dana Rodriguez, chef of the future Casa Bonita in Denver, shares her approach to Mexican cuisine

Chef Dana Rodriguez strikes a strong figure in the Denver dining scene, but one of her most notable characteristics comes through in her dedication to bringing her own Mexican culture to the Mile High City.

"Things like this, food and beverage and art, they are things that are helpful because it's an exchange of work and economy and culture and education," said the chef, who comes from the Mexican city of Chihuahua. "It sounds simple, but there's a lot in between, like the importing, the expediting, the paperwork. But overall it's creating jobs and doing things for both countries, and I am very proud to say I can do that."

Not only does the chef create tasty Mexican food at two of her Denver restaurants, Super Mega Bien and Cantina Loca, but she makes tequila and mezcal for each, has served as a delegate during the Biennial of the Americas summit, and pushes to cultivate relationships with farmers and artisans in Mexico in order to bring authentic flavors and décor to her spaces.

When Rodriguez wants Mexican art for her restaurants, she goes as close to the source as possible. For specialty ingredients like Mexican chiles, mole and beans, she has a specific importer she works with who, in turn, works directly with the growers and producers. Each ingredient is well thought out, whether it's at Cantina Loca in a $4 carnitas taco or in the $19 red chile roasted chicken; or, the $29 hot stone fish stew or $9 Yucatán shrimp ceviche at Super Mega Bien, a dim sum-style restaurant that also serves larger plates to order.

"I never go to owners, I start having the conversations with the workers and I ask them who does the right thing and the wrong thing and who they like," said Rodriguez.

She talks to locals and has an obvious interest in whatever subject she's talking about, which helps draw people in.

When Rodriguez’s white business partner went to Mexico, her experience was totally different.

"They don't communicate with her like they do with me, we speak the same language and that's part of the connection," she said. "For her it would have taken a broker and other people to make introductions, but for me it was just me saying, 'Hey, how are you? Let's do this together.'"

The connections and method of sourcing ingredients not only helped her restaurants succeed, but also gave Rodriguez a way into the spirits world. Her Doña Loca tequila and mezcal brand came to the market in 2020.

"It's a long, long time since I started doing all the research for all of this, and it feels good when you are there [in Mexico] and they show you what they do and you trust them and they trust you," said the chef. "It's how you feel overall, and I have to feel comfortable."

The name of the agave spirit brand stems from Rodriguez's nickname, "Loca," which means “crazy,” and she used the launch of Cantina Loca in January of 2022 to help bring the two spirits to life, at least in the minds of consumers. It's the main tequila and mezcal used at the restaurant, and the chef said she enjoys talking about it to customers when they ask.

"If you do the right thing, then we grow here, and they grow there [in Mexico]," she said, adding that she's working on creating more stable jobs and a union for single women in that country too. "It's about taking care of the people actually doing the work, you know. If you take care of the employees they do a good job and stick with you."

The chef also runs Work & Class, a casual spot in Denver’s RiNo neighborhood that has dished out sharable plates of blue corn empanadas, coriander roasted Colorado lamb, and smoked gouda macaroni and cheese since 2014. While the restaurant doesn't showcase Rodriguez's heritage quiet like her other operations, it still illustrates her dedication to solid suppliers and staff support.

"I want people to think on the story, not just on my brand," she concluded. "It's about why you should support that all together. When you support farmers and the locals, it’s the same."

Now, Rodriguez plans on bringing that same authenticity and care for vendors to Casa Bonita restaurant, which was made famous nationwide thanks to the animated series South Park on Comedy Central and an episode about the large, pink façaded eatery known equally for its cliff divers and creepy cave as it was for the notoriously bad food.

The rundown space was bought by South Park creators Matt Stone and Trey Parker in 2021, and they committed to revitalizing the iconic cantina. While the soul of Casa Bonita will remain, even after a multi-million dollar renovation, the bad food will not. Instead, Rodriguez has signed on to revamp the menu, bringing quality food to the forefront, even though guests will still get the cafeteria-line experience of the past.

The opening of Casa Bonita has taken longer than its celebrity buyers expected. In the meantime, Rodriguez waits, shlepping some of Casa Bonita's iconic tables to Cantina Loca where ideas for the new pink house are underway and contacts are being made, Rodriguez style.