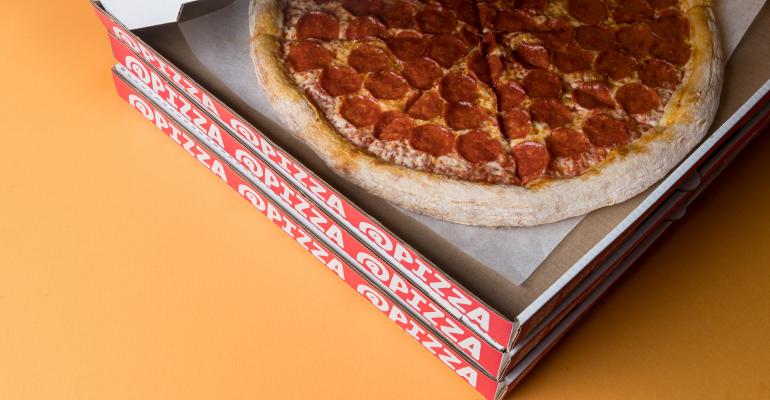 @Pizza
Local pizzerias can apply to be a part of @Pizza's listing.
Operations>Delivery & Takeout Solutions

@Restaurants — from the virtual restaurant company behind the Los Angeles-based Pizzaoki and Breaking Bad-themed Los Pollos Hermanos — is launching a pizza recommendation service on Jan. 28 in partnership with Uber Eats and media company F*ck Jerry. Customers will soon be able to find pizzeria recommendations in their neighborhood on the Uber Eats app that are all vetted by @Restaurants’ editorial team and food blogger network.

Before launching @Restaurants, founder Lawrence Vavra built a ghost kitchen pizzeria in Los Angeles called Family Style in 2017. From there, Family Style expanded to 22 locations and added new concepts, including Los Pollos Hermanos and Pizzaoki (named after DJ/entertainer Steve Aoki). After their major expansion, Vavra said they started getting franchising requests but had no intention of dipping into brick and mortar. Instead, they wanted to help smaller restaurants become more successful in the increasingly delivery-centric restaurant industry.

“During the pandemic, you’d see so many restaurants closing and they were mostly indies, so we wanted to level the playing field,” Vavra said. “Chains get their food cheaper and have better third-party delivery rates, and if you’re not able to do all of this marketing to generate revenue then you’re losing money. […] This is our guide to great indie places around the country.”

Pizza is @Restaurants’ first launch as a middleman digital restaurant recommendation service, but others are coming down the pipeline including @hotwings, @breakfast, @lunch, @liquorstore, @baked (for baked goods and desserts), and @herbys (for plant-based foods).

At launch, there were nearly 200 pizza places from across the United States (and in most major metropolitan areas) on the service, with the goal of adding 100 more by the end of the quarter, and to cover all 50 states by the end of 2021. @Pizza — which is currently only available via Uber Eats and does not have its own app yet — crowdsources “the best of the best” of mom-and-pop pizzerias by searching through the hashtag #dailypizza (which users or fans can use to submit a pizza for consideration on the service). Pizzerias can also apply to be featured on the service and they’ll be vetted by @Pizza’s team of five full-time staffers and network of food bloggers and pizza afficionados who will check out a pizza place that applies to be featured.

Of course, since it’s the best of the best, not everyone will get featured. Vavra said that they’re still working out the kinks, but intend to make the recommendations “as scientific as possible” with the goal of having an algorithmic formula to score each pizza based on specific categories.

“The third-party delivery apps have gotten cluttered with too many restaurants and even fake virtual restaurants,” Vavra said. “They’re hard to navigate. We thought that if we can get the user to trust us, then we’ve done half the work. All they have to do is click @Pizza and immediately get access to the best local pizza in their area.”

If a pizzeria that applies to @Pizza is not up to snuff, then Vavra said his team puts the business on their waiting list, with the promise of gaining access to future @Restaurants services, which could include helping restaurants learn new systems, curated recipes, or tips for getting the best ingredients.

Restaurants that are accepted gain access to the @Pizza network. Vavra said he wants to be a resource for independent restaurants that can’t afford their own social media or marketing team. With this partnership, the businesses can maintain their independence while drumming up new customers that might not otherwise find their restaurant.

“Our primary mission is to help these restaurants,” he said. “The long-term vision is once they’re in our network we can help them with their food buying, operational costs, etc. We have experts in everything.”

Once restaurants are accepted, @Pizza charges businesses a “small licensing fee” that comes out of what they’re already paying to Uber Eats. The long-term vision is what Vavra envisions will give @Restaurants a profitability boost, saying that they’re not looking to “make money off of the licensing agreements.”

“We don’t look at this service as consulting; we look at it as creating a network of independent restaurants,” he said. “Our network of indies can use these products to generate revenue or stay under cost, making them profitable.”

So, what incentive do consumers have to browse @Pizza’s service instead of Yelp? Vavra explained that unlike services like Yelp, where reviewers may be incentivized to write a negative review to air out their frustrations (and therefore the reviews might skew negative), @Pizza is highlighting only the good stuff. This in turn makes it a lot easier (and faster) to select a place to get delivery from on a Friday night, instead of scrolling endlessly through apps, Vavra said.

Just don’t expect to find Family Style’s own restaurants on there: “We want to be as objective as possible,” he said.