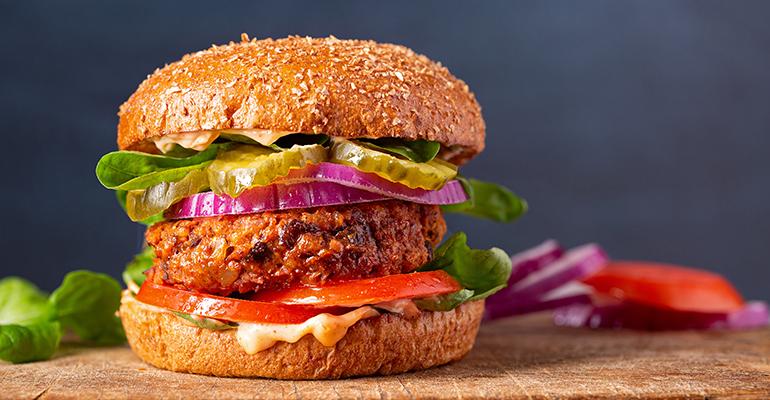 Plant-based protein, value-added foods and nitro-soda to be found at restaurant show

Three years’ worth of trends will be on display

Food and beverage producers are ready to show what they have been working on since 2019, the last time that they were able to proffer their wares at the National Restaurant Show.

Judges for the National Restaurant Association’s Food and Beverage Awards, also known as FABI, of which this reporter is one, had a preview of what show attendees can expect to find.

Given the struggles that restaurant operators are having finding staff, it should come as no surprise that a lot of labor-saving items can be found. Those include ready-to-use items like Tyson’s new chicken-and-waffle sandwiches, made of spicy breaded chicken breast between two sugar-topped Belgian-style waffles. Each sandwich is individually butcher-wrapped for heating in the microwave. Tyson says they can be held in warmers for up to four hours.

Hillshire Farms will be showcasing its new fully cooked pork chorizo crumbles, ready to heat and scoop into a taco, and Tribe 9 Foods has individual quick-frozen (IQF) gluten-free tortelloni stuffed with a four-cheese blend of mozzarella, Parmesan, Asiago and ricotta.

Australis Aquaculture will be exhibiting its ocean-farmed, skinless and pre-portioned 4-ounce servings of barramundi.

Taste It Presents will be showcasing three FABI-winning lines from Italy, including Cremino Italian Dessert, which is an individually portioned treat with layers of gianduja mousse, milk chocolate mousse and dark chocolate sauce over a thin cookie with hazelnuts. Its Mascarpone Semifreddo Bar Cake features layers of that Italian cheese with Bavarian cream, sponge cake and dark chocolate, all topped with crumbled amaretto macaroons. Its Sorbissimo is a bit like an Italian smoothie, poured semi-frozen from a bottle.

If your operations have soft-serve machines, Ripple Foods has a non-dairy option that was given the nod of approval by FABI judges.

Zùsto sugar substitute isn’t ready to eat, but it is ready to sweeten baked goods, candy, beverages and more.

Many customers go to restaurants for stress relief, which can mean they want a cocktail, or cocktails, that they don’t have to wait for.

Exhibitors are providing several fairly sophisticated options for mixers that only need to be shaken with a spirit, or served on their own as spirit-free cocktails, such as the Bees’ Knees, Sidecar, South Side and Ward 8 drinks from Blind Tiger that are suitable on their own for non-drinkers but also ready to be spiked for something more potent.

For a distinctive iced coffee Distant Lands Coffee will be exhibiting their Java Trading Thai Iced Coffee Latte, made with coffee, milk, sugar and cardamom.

And PepsiCo will be exhibiting a new kind of soda: Nitro Pepsi is made with nitrogen instead of carbon dioxide, like nitro cold brew coffee and assorted stout beers, resulting in smaller bubbles and different mouthfeel.

A quick upgrade for French fries, pasta and more is available via Sabatino Truffles, which has released a truffle-Parmesan seasoning ready for shaking, and Sevillo Fine Foods has a new chimichurri with parsley, cilantro, garlic and shallots that’s delivered frozen and ready to serve.

You can expect to see a lot of plant-based protein, particularly substitutes for chicken, but also at least two fish-free replacements for canned tuna, one for salmon, and a vegan version of Spam.

Also keep an eye out for a koji-based meatless product posing as Black Forest ham (although it tastes more like bologna).