This Brooklyn-based meatless “butcher” and plant-centric restaurant with four locations opened a community cafe and bakery next door to its Williamsburg, Brooklyn location in May.

The 1,200 square-foot space is meant to be an extension of the original juice bar/vegan restaurant and offers coffee, breakfast bowls and vegan and gluten-free pastries for an average price of $3 per pastry. The space itself will offer bread-making and floral banquet classes, as well as artisanal retail products like spices and organic wine.

Next door at the Butcher’s Daughter casual-dining restaurant, breakfast menu options include vegan, vegetarian and gluten-free options like a Mexican breakfast bowl, egg sandwich, and an acai bowl for an average entrée price of $14. Plant-forward lunch menu items include a quinoa sesame salad, Reuben sandwich made with vegan pastrami, and avocado toast for about $14; and dinner menu items include cauliflower pizza, portobello steak and mashed potatoes made with vegan “steak,” and the Butcher’s Burger made with an Impossible Burger patty for an average price of about $17.

Continuing in the trend of meat-free eats for carnivores, Honeybee’s is a plant-based barbecue and whisky-centric saloon opened by entrepreneur Ravi DeRossi in May, serving vegan versions of Mexican-inspired Southern barbecue dishes like spicy “chicken” and waffles, burnt ends made from seitan with cornbread, and pulled-pork soy curls with mushrooms and pickles for an average check of $45.

“Using traditional techniques and modern preparations our team has produce an excellent plant-based menu that truly represents barbecue; with char, crunch and flavor that anyone’s grandmother would be proud of,” a representative from Honeybee’s said.

The average check ranges from $20 to $45 per person, depending on venue and time of day. Plant City also has a coffee bar, marketplace, and event space on premises.

The two vegan concepts have joined under one roof in partnership with private-investment firm Equity 38 for the openings of two new plant-based café locations in San Francisco and Newport Beach, Calif. The combined menu from the as-of-yet unnamed concept under Superfood Holdings LLC will offer acai bowls, gluten-free toasts, coffee, tea, juices, and paleo waffles for an average check of about $15.

The Project Juice/ Beaming project will open stores with an average unit size of about 800-square feet, and the owners say they are considering franchising.

Opened in April, Rüt offers American gastropub food for vegan (and omnivorously curious) clientele, with indulgent menu items like the jalapeño mushroom burger, Buffalo cauliflower wings, and truffle mac, as well as a selection of hand-crafted cocktails, wine and beer on tap for an average check of $25 to $30.

Under the helm of executive chef Josh Lorenzen and chief operator Justin Oliveri, this 1,400-square-foot restaurant is not just for the animal-product-avoidant:

“We strive to make vegan options more accessible and appealing to a wider audience,” a representative for the restaurant said. “Choosing a plant-based diet doesn’t mean sacrifice. Our menu is mostly comfort food, but we do have some healthy options as well.”

After two years of operating as a concession stand at entertainment venues, plant-based burger brand Burger Patch opened its first brick-and-mortar location in May.

The quick-service concept is just 750-square-feet and is designed for a grab-and-go experience. Owners Phil and Danea Horn look forward to meatless burgers becoming more mainstream.

“We expected this to happen, and even though it’s happening sooner than we expected, it adds more visibility and acceptability to our cause,” Phil Horn said.

This meat-free quick-service restaurant has been around since 2012 — long before the new generation of meaty veggie burgers came along — but the five-unit chain is planning a major expansion, with three locations set to open later this year in Pennsylvania and Washington, D.C.

HipCityVeg serves burgers made from Beyond Meat patties, along with house-made ingredients like pulled “steak” made from mushrooms, smoked tempeh, grilled portobellos, and tofu for an average check of $15. The menu also serves vegan “Chick’n” sandwiches topped with ingredients like avocado, chipotle crema, and ranch dressing, as well as salads, and vegan milkshakes.

And despite an increasingly crowded market, CEO Nicole Marquis and the HipCityVeg team are not worried about the competition.

“We're so excited to know that the plant-based wave is really taking off,” a HipCityVeg representative said. “The fact that other, larger chains are taking on this idea just means that our goal for a healthier, more sustainable planet is getting closer.”

HipCityVeg is owned by Philadelphia-based hospitality group Marquis & Co., which also operates vegan restaurants Charlie was a Sinner and Bar Bombón, and has two layouts: one is 600-square feet, and the other is 1,800-square feet.

With the tagline “Better For All,” Honeybee Burgers — which opened on May 1 in Los Angeles — is just as much about raising awareness about our environmental impact as it is about serving plant-based burgers.

“By switching out a meal every so often from animal-based to plant based, we can help reduce our carbon footprint, improve our health and reduce the use of animals in the food chain,” a representative from Honeybee Burgers said.

The 500-square-foot quick-service restaurant operates under a grab-and-go format, with both Impossible and Beyond Burgers on the menu for around $9 per burger, or $13 for a double. The entire menu is vegan, with animal product-free toppings including non-dairy “cheeses.” Coconut milk-based milkshakes are available too. Honeybee’s signature side is sweet potato “frots” — fries mixed with tots. 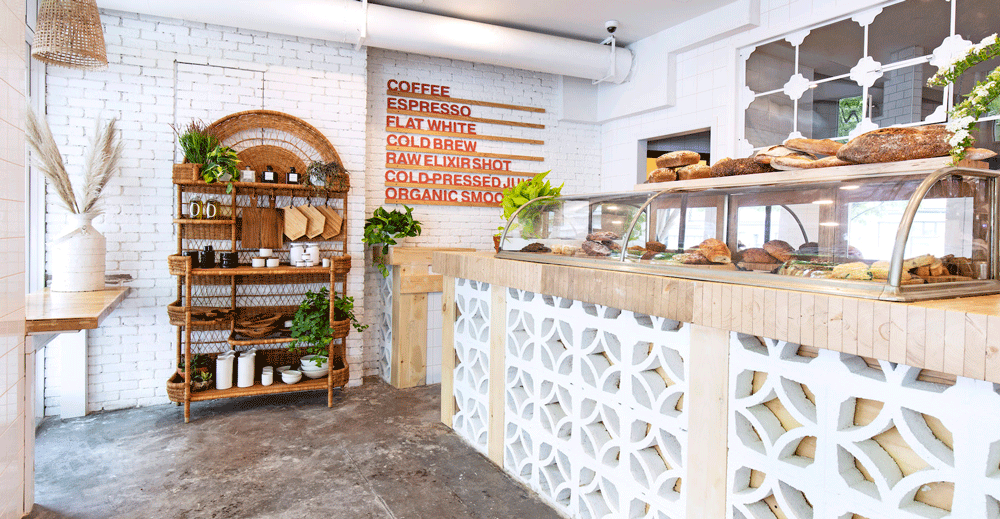