With Ulele, Columbia Restaurant Group set out to pay tribute to all the Native Americans who were here long before us and taught lessons of sustainability, freshness and respecting the land and water. It’s a movement we can definitely get behind. But how does it translate to the menu?

“We wanted our menu to feature fresh takes on food that Native Americans might have eaten hundreds of years ago, influenced by later explorers and settlers and then updated for today’s tastes,” says Richard Gonzmart, president and co-owner of Columbia Restaurant Group.

Expect great food and attentive service in a unique waterfront location. There are no freezers at Ulele—the food is guaranteed fresh. Popular dishes include the Florida Pompano and Strickland Ranch Flank Steak.

The spectacular building set at the north end of the Tampa Riverwalk dates back to 1903, when it was a water pumping station. Adapting the building to house a restaurant provided a beautiful canvas for Columbia Restaurant Group to curate Native American art and offer stunning views of the nearby river and park.

Dallas is not exactly “off the beaten path,” but the city’s culinary prowess is often dismissed. Now Proof + Pantry is drawing newfound attention to the city’s arts district, which brings together aficionados of art, music and especially food.

The energy from the bar is contagious and flows through the restaurant. The entire space serves as a functioning pantry for the kitchen, with items on display for all to see. Chef Kyle McClelland, who trained at the French Culinary Institute, specializes in bringing aspects of two separate cuisines or experiences together as one seamless dish, such as the Tomahawk steak served with Asian vegetables or a whole fish served with the head and spine fried and edible.

You might be tempted to take your shoes off, kick back and put your feet up—it’s that cozy of a place. And co-owners Joe and Katy Kindred, both madly experienced restaurateurs from bigger-city backgrounds, wouldn’t mind. After all, the Kindreds see their restaurant as an extension of their home (which is just two minutes down the road). It’s a family business, and the care they exude for their community, guests and staff truly makes all the difference at this place.

Joe helms the kitchen and the rotating menu, bringing in unique flavors each week through their commitment to sourcing ingredients from local farmers and foragers. It’s clear the Kindreds love pasta—making it, serving it and eating it.

“Pasta is such a fun medium to work with and there are infinite combinations, types and preparations,” Joe says.

We’re not sure what’s more impressive: the modern-yet-elegantly designed bar and dining room or the floor-to-ceiling windows offering stunning views of Lake Mendota. Statehouse is located on one of the most prominent corners in Wisconsin’s capital city, on the seventh floor of the Edgewater hotel. Chef Thomas Welther built the menu after 30 years at the Hilton Anatole in Dallas, adding Midwestern flair and regional ingredients. He wasn’t responsible for the plush turquoise chairs, but those are pretty wild, too.

When you ponder the local cuisine in Madison, seafood might not be the first thing that comes to mind. But that’s exactly what’s swimming out of the kitchen at The Statehouse, emphasizing the waterfront location. The beauty of the lake extends in to the dining room design, where natural elements like wood and tree leaves surround blue accents that highlight the water.

“It’s unique. A combination most people have never had. Beautiful plate presentation,” he says.

First off, we love the name. Counting House is located on the ground floor of the 21C Hotel and Museum, which took over an old bank building. If you haven’t been to a 21C property, get there soon. They’re modern and eclectic, with more interesting amenities and art installations than you’ll have time to look at.

So far the tobacco tuna dish is stealing the show. Under the Sea Snacks section of the menu, Tobacco Tuna is inspired by a traditional tapas dish, but incorporates Durham’s history of growing tobacco. Tuna loins are wrapped in tobacco leaves and cured for a few days, then dried.

“Counting House has a menu that can be appealing and very approachable for everyone—it’s not strictly Southern food,” Munchel says. “The menu draws from a variety of influences and uses the best local ingredients to create a wide variety of dishes.”

Check this place out: An absolutely beautiful Colonial building in Birmingham, AL, offering multifunction spaces with gardens in the front and back and a wide open kitchen. Hence the name.

Galley & Garden was the vision of Chef James Boyce and his wife, Suzan. James attended the Culinary Institute of America and worked under Daniel Boulud for six years at Le Cirque before winning a James Beard award for his cuisine at the Phoenician. The two brought in a world-class architect and a master craftsman to renovate the former Merritt House into a stunning partially open-air eatery.

The name Galley & Garden paved the way for the menu, for which Boyce tries to use every piece of produce from local farmers as well as much protein from the Gulf of Mexico. He serves Gulf Red Snapper four or five times a week, declaring it “such a pretty fish and beautiful to cook.”

At Galley & Garden, Boyce and his team welcome diners looking for full meals, but also those looking for just drinks or appetizers. It was designed so those seated for dinner are secluded from private parties or happy hour patrons. You can sit inside or out on one of several patios, or congregate in the courtyard garden for an aperitif.

By now ou probbly know that bees are disappearing. The number of hives in North America has been halved over the past 20 years, meaning fewer and fewer agricultural crops are being pollinated.

When Chef Taylor Hall and his wife Casie learned of this, they were inspired to do something about it. What started as a hive in their backyard five years ago has evolved into  Apis Restaurant & Bee Apiary in Spicewood—about 35 minutes west of Austin—with 20 hives onsite.

“The inspiration for the concept was not only for the honey the honeybee produces but also for what it symbolizes: seasonality, working harmoniously with nature, pollinating flora that, in turn, provides food for fauna,” says Hall. “The honeybee is also an emblem for hard work, which is one of the core values for Apis.”

Inside, Apis is rustic and charming with nods to the honeybee throughout. The menu changes often, but the Chestnut Blecs Pasta with Hapgood Ranch Wild Pork and the salumi plate, which features nose-to-tail trimmings from whole pigs purchased flocally, are staples.

“Our concept is hinged on nature and requires land,” Hall says. “We couldn’t do this concept justice in the city.”

Not much left to the imagination at Steak & Whisky. They do steak. They do whisky. And they do both of them damn well.

Steak & Whisky, the fifth concept from Blackhouse Hospitality, is a throwback to the classic, nostalgic sentiment of a steakhouse … with a twist. The menu items range from traditional porterhouse to Asian fusion-style cuts of beef dry-aged for up to 30 days. The menu is fairly straightforward— Chef Tin Vuong uses the best-quality meats and seafood, which speak for themselves.

“I’m really big on technique and it’s important to me that my chefs perfect the basics: sauces, egg cookery and meat,” Vuong says. “So the restaurant is also rooted in that precise old-school French technique.”

Vuong won’t apologize for Steak & Whisky’s straightforward approach. Steaks are the best sellers, most of them aged up to 30 days and offered with a selection of two sauces, such as béarnaise, chimichurri, fresh wasabi, house steak Sauce, peppercorn or bordelaise. Vuong’s favorite dish to prepare? A simple, broiled, Porterhouse steak.

“For me it’s about the simplicity and letting the quality of the product shine through,” he says. 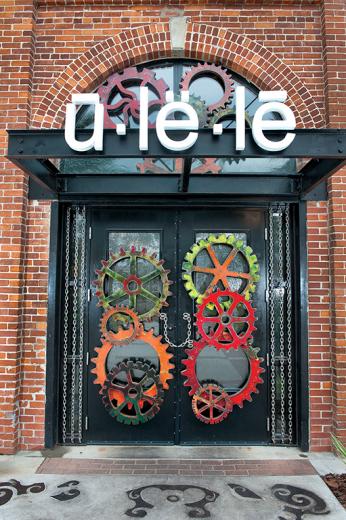