Down-to-earth design and a menu described as “uncomplicated yet adventurous” set the scene for this new Oak Cliff neighborhood restaurant, which opened Oct. 9 for happy hour and dinner. A mix of regional flavors from Texas, California and the American South make up the menu here, with cocktails inspired by nature (The Flower Patch, Cactus Jack and other floral/vegetal drinks).

Matt Balke, chef/co-owner, named the restaurant after the original name of his hometown, Uvalde, Texas. The name Encina is Spanish for Holm Oak, also a type of tree. This sort of attention to detail runs deep for Balke (who worked at Dallas elevated-barbecue hotspot Smoke for two years) and Corey McCombs, co-owner.

The Terrace at Palette, San Francisco

An outdoor dining area surrounded by a futuristic U-shaped steel enclosure — a sign of the times or just the future of restaurant design? “In designing Palette’s Terrace, we felt it was very important to create a permanent outdoor dining structure that integrates fully with the building’s iconic exterior, as well as our future indoor dining room and gallery space,” said chef and owner Peter Hemsley, who with project manager David Middleton and ShopFloor Design, created the outdoor space for “fine dining in today’s world” in San Francisco’s SOMA district.

At Palette, 5% of every to-go or delivery order goes to the Bay Area Worker Relief Funds, which supports Bay Area visual artists during this crisis. The menus here are “Cal-Coastal,” and will change by the micro-season. Happy hour is festive with champagne and “buck-a-shuck” oysters, followed by the full dinner menu from 5 p.m. to 9 p.m.

Ice cream and sorbet at Palette

After running Chicago’s Spiaggia for nearly 35 years, Tony Mantuano and his wife Cathy Mantuano (who ran Spiaggia’s wine program) took off for Milan last year in order to eat, drink and think. While 2019 now seems worlds away in many ways, the Mantuanos are bringing Italian fine dining into the future, this time in Nashville.

Yolan is inside The Joseph, a Luxury Collection Hotel located in Nashville’s iconic downtown. Columbus, Ohio-based Pizzuti Companies, which owns The Joseph, has gone all out, including bringing in 27 different pasta dies for a pasta extruder from Italy. The restaurant features a tasting menu (five or eight courses) of housemade pasta and meat and fresh fish dishes as well as a la carte items such as caviar service with burrata, prosciutto and potato pancakes. Promising menu details include crisp sage in brown butter (with the tortelli).

A cheese cave — set to be the showstopper of this space — connects the dining room to the kitchen and houses wheels of imported cheese. Perfect to go along with wine bottle-lined walls (more than 600 of them).

In November, Brasserie Mon Chou Chou, a French comfort food concept from Executive Chef Laurent Réa and Southerleigh Hospitality Group, will open its doors in San Antonio’s Pearl district. The space is 4,600-square feet designed by Clayton and Little Architects and Joel Mozersky Design. Mon Chou Chou is meant to look like a brasserie you’d find in Paris and allow diners to dine-in, sit on the patio or carry out.

Quintessential French classics, like this melty raclette cheese with a baguette, are the sophisticated-yet-homey stars on the menu by Réa, who formerly served as executive chef at Andrew Weismann’s Signature. The menu will feature French icons such as steak frites, cheese platters, braised Texas rabbit in Dijon sauce with tagliatelle, oysters, escargot and more.

Another entry in Mon Chou Chou’s version of “French cuisine 101,” Lyonnaise salad is a learning experience and entry into French food, with its signature flavors and textures (the frisée, the lardons and the eggs, oh my!).

Like all good spinoffs, Bodega Taqueria aims to mirror the best features of the original, in this case that’s fast-casual Mexican food from flagship Bodega Taqueria y Tequila, which opened in 2015. The new Bodega Taqueria, by Menin Hospitality, will offer Mexican street food and no booze, with culinary invention and a quick-service format at the forefront. Guest order from a vintage airstream trailer with the option to dine in the garage-chic setting of picnic tables, neon bar stools and graffiti-accented walls.

Chef and pit master Matt Horn has built a cult following with his Bay Area pop-ups showcasing his signature West Coast barbecue style and his heritage of unsung Black pitmasters and Southern cooks.

Many of Horn’s fans have been known to fly across the country and wait for hours to get a taste of smoked ribs, whole hog, brisket, sparerib and turkey.

Horn and his team will be adding new barbecue items to the menu of his bricks-and-mortar spot, including half and whole quartered chickens, snappy hot links and new sandwiches. Horn will slice meat to orders and customers can gets sides such as pit beans, collards, black-eyed peas, potato salad, slaw, granny’s potatoes and cornbread. Desserts — a key component of a full barbecue meal — will include banana pudding, bourbon bread pudding and rum cake, created by Matt’s wife, Nina Horn.

Porta Via, Italian for “take away,” are very appropriate words for the reality of 2020’s restaurant landscape. Open for breakfast, lunch and dinner with a seasonal/local focus, the third location for restaurateur Peter Garland, Porta Via Calabasas sourced 90% of its fixtures from small business vendors in the Southern California community, to help fellow businesses rebuild during COVID. 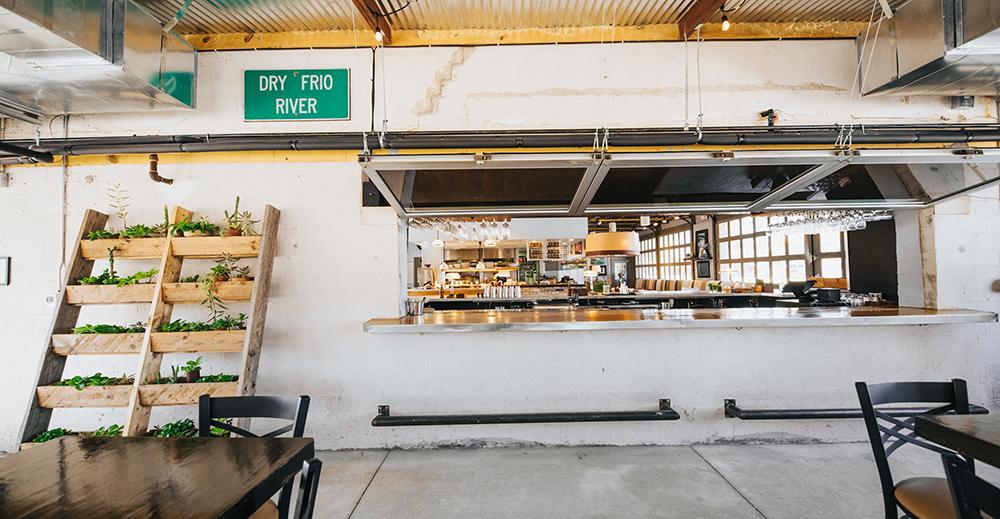