José Andrés is mostly known these days as a philanthropist, which might cause some people to lose sight of his restaurant group that is not only very successful, but serves excellent food with great service across the country, with 19 concepts, from fine-dining to fast-casual vegetarian food to a food truck selling Spanish flautas, in seven markets.

Bailey and her team operate Federal Pizza, Churn, Windsor and two Joyride locations in the Phoenix area as well as Postino, a 21-unit wine bar with locations in Colorado, Georgia, Texas and Arizona, with more to come.

Black owns and operates Grey Sweater and Black Walnut, both next door to each other in Oklahoma City, offering bespoke creative meals for the city’s increasingly cosmopolitan diners.

Fine-dining restaurants, a noodle bar, deli, cocktail lounge, and a food hall are all part of Bonanno’s restaurant empire in Denver, which includes Mizuna, Luca, Osteria Marco, Green Russell, Russell’s Smokehouse, Vesper Lounge, Salt & Grinder, French 75, Lou’s Food Bar, and Denver Milk Market. Bonanno has also been instrumental in allowing Colorado restaurants to make their own charcuterie legally, and he looks out for his team, by, among other things, having a therapist on staff.

The operator of Chauhan Ale & Masala House, Chaatable Indian Street Food, The Mockingbird, and Tànsuŏ, all in Nashville, has helped diversify the culinary offerings of Music City with her take on Indian and Chinese food. In the past, Chauhan also has made efforts to brew beer with Indian spices as well as hops.

This chef and restaurateur opened Uchi in Austin in 2003 and since has expanded his empire to five Uchi locations, two more casual Uchiko restaurants, a bar in Dallas called Uchiba, and Loro, a three-unit Asian smokehouse made collaboration with Aaron Franklin of Austin landmark Franklin Barbecue.

Craft opened his first restaurant, Niche, in 2005 at age 25. Although that upscale restaurant has since closed, he now is offering French bistro fare at Brasserie by Niche, casual Italian at Pastaria, lunch and retail goods at Pastaria Deli & Wine, burgers and brats at brassWELL at Rockwell Beer Co., brunch at Bowood by Niche in Bowood Farms Garden Center, brasserie food and drinks at Brass Bar, and South American-inspired cuisine from a wood-fired grill at Cinder House at the Four Seasons Hotel. He also curated the restaurants at STL Food Hall, where he operates The Kitchen Bar and Fordo’s Killer Pizza.

Guard grew up in Hawaii, but he has called Denver home for the past couple of decades, and has a prolific roster of restaurants including four-unit Mexican concept Los Chingones, four-unit fast-casual bowl concept Bubu, Guard & Grade steakhouse with locations in Denver and Houston, breakfast concept Hashtag, and a food hall called Grange Hall.

This pioneer in the Denver food scene operates some of the city’s most beloved restaurants, including Rioja, which reflects the food of her Santa Barbara, Calif., roots, French concept Bistro Vendôme, Stoic & Genuine Seafood and Oyster Bar, and tapas and gin bar Ultreia.

Keller raised the bar of what American fine dining can be with his landmark restaurants The French Laundry in Yountville, Calif., and Per Se in New York City, but more than that he has set a standard for always trying to do better, not only at the high end of the restaurant would, but also at his more casual concepts: Two Bouchon Bistro and Bouchon Bakery locations in Yountville and Las Vegas, Ad Hoc + Addendum, La Calenda, and Regiis Ova Caviar & Champagne Lounge in Yountville and The Surf Club Restaurant in Miami.

At Alinea, in partnership with chef Grant Achatz, Kokonas helped make Chicago the American center of avant-garde cooking, and he has helped transform how restaurant reservations are made with his Tock App, that allows for pre-paid booking for dinner just as one would book concerts and other performances. The group now also operates Next, a restaurant whose concept changes with each new menu, The Aviary cocktail lounge and its speakeasy called The Office, open-kitchen concept Roister, and The St. Clair Supper Club, which is entered through Roister.

The founder of the Lime Fresh Mexican chain now operates Wakuda in Las Vegas and Singapore, Chica in Las Vegas, Miami, and Aspen, Colo., eight-unit Yardbird, Spring Chicken in Miami and Los Angeles, and Capri and Spritz, both in Las Vegas.

This hospitality icon is known for running restaurants with great service and a focus on treating staff well — an approach that’s part of his “Enlightened Hospitality” approach that also extends to Shake Shack, the fast-casual burger chain he founded and has since taken public.

This Columbus, Ohio, powerhouse operates 16 standalone restaurants in and around Ohio’s capital, as well as 17-unit Ocean Prime, and Del Mar in Naples, Fla..

New openings are planned for Las Vegas and Tampa, as well as more in Columbus.

This pioneering chef and restaurateur who takes pride in her working-class roots runs a cocktail bar with the straightforward name Drink, a 10-seat demonstration and cookbook store called Stir, and five restaurants: B&G Oysters, seasonally focused The Butcher Shop, fine-dining Menton, her flagship and landmark No. 9 Park, and an Italian trattoria called Sportello.

Schlow commutes a lot between Boston and the Washington, D.C., area, where he operates Nama Sushi Bar and Nama Ko, the latter serving Japanese-inspired food and craft cocktails, and two locations of his six-unit Italian concept Alta Strada. In Boston he runs another Alta Strada at Logan Airport, as well as Michael Schlow’s Italian Kitchen, Monti Roman Pizzeria, and Sauce Burgers. He also operates The Hermitage Inn in West Dover, Vt., and Alta Strada locations in Wellesley, Mass., and at Foxwoods Casino.

This former chief operating officer of José Andrés’s ThinkFoodGroup established her own foodservice stronghold in Washington, D.C., during the pandemic with New American restaurant The Duck & The Peach, Italian restaurant La Collina and a gin bar called The Wells, with more to come. The three restaurants are all in a row on Capitol Hill and share one kitchen — a sign of the efficiencies that operators have figured out over the past few years.

This former entertainment impresario has taken his eye for talent and beautiful interiors and brought it to bear on the restaurant world with great success. His 21 restaurants in Philadelphia include lavish restaurants like Morimoto and Buddakan, but also Jackass Burrito and The Burger that Ate Philadelphia. He also has nine restaurants in New York City, including Buddakan, Morimoto and Jackass Burrito, but also other critics’ picks such as Pastis and Le Coucou. He has three restaurants in the Washington, D.C., area, and a Pastis is in the works there, as well as in south Florida, where he already operates two restaurants each in Fort Lauderdale and Bal Harbour. 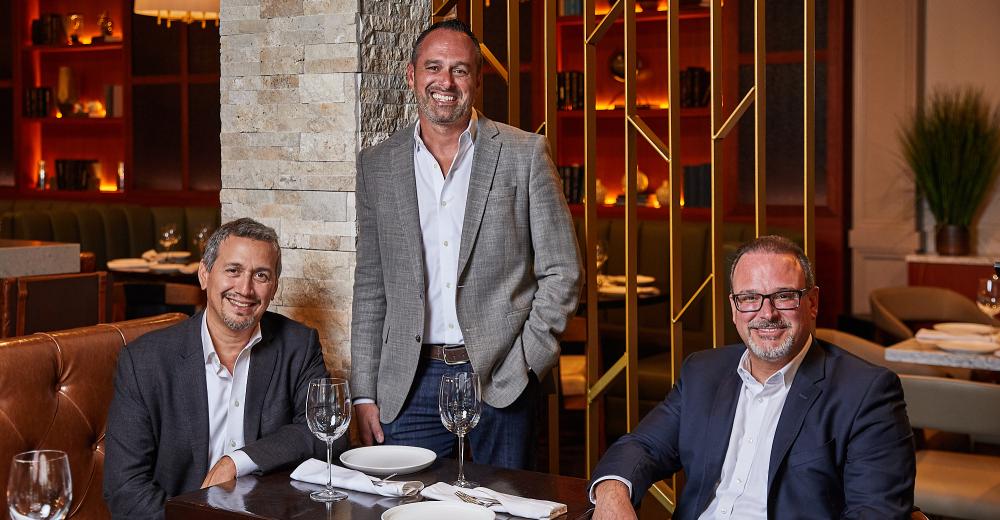