Pettry moved to Louisville, sight unseen, took over the kitchen at Decca and proceeded to rack up the kudos, including a nomination this year for Food & Wine’s The People’s Best New Chef in the Southeast. Raised in Asheville, NC, she picked up cooking skills from her parents, helped with the garden, fished and foraged for mushrooms. In recent years she has worked in the San Francisco Bay Area with Loretta Keller, and that experience shows in her menu’s clean flavors, restraint and respect for ingredients. Decca’s Mediterranean/Middle Eastern-influenced fare includes panko fried green tomatoes, pan-roasted chicken breast with eggplant and ras el hanout and summer squash a la plancha with mint pesto and house-made buttermilk ricotta.
Zack Sklar
Partner, Cutting Edge Cuisine/Peas & Carrots Hospitality, Detroit

While still a student at the Culinary Institute of America, he launched a catering company from his tiny apartment. After graduating, he circled back to his native Detroit, where his catering company took off, and became a partner in Peas & Carrots Hospitality, which owns Social Kitchen & Bar (contemporary fare and craft cocktails) in Birmingham; MEX (modern Mexican); and, as of August 2014, Beau’s Grillery (Updated American classics, wood-grilled seafood and meat), both in Bloomfield. He’s got plans for more concepts, including one in Chicago. And he hasn’t hit 30 yet. Don’t you just hate him?
Kim Floresca and Daniel Ryan
Executive Chefs, [ONE] Restaurant, Chapel Hill, NC

This long-time twosome took over a struggling Chapel Hill restaurant in August 2013 and turned it around within a year. The feat is no surprise, given their background: a decade at a who’s who of great restaurants, including Per Se, the French Laundry, Alinea, El Bulli and, ultimately, as a turn as the executive management team for the three-Michelin-starred Restaurant at Meadowood in Napa Valley. They chose Chapel Hill for its emerging foodie reputation and bounty of fresh products available at the back door. Local media took notice, and the couple shared a People’s Best New Chef nomination from Food & Wine last year. We expect more great things from this talented duo.
Nick Erven
Partner and Executive Chef, Saint Martha, Los Angeles

Following a stint at Tom Colicchio’s NYC Craft Restaurant, Tomason moved to DC in 2013, started a bakery at Union Kitchen, a food incubator, and began supplying area markets and food trucks with desserts and pastries. She opened her first brick and mortar location, RareSweets, at CityCenterDC, a hip mixed-use project, where her neighbors will include Daniel Boulud’s DGBG Kitchen and Bar and a new Momofuku. The bake shop serves seasonally driven specialty desserts, layer cakes, ice creams and other sweets, many of them based on heirloom family and vintage recipes. Tomason is out to prove that a fast and delicious dessert world exists beyond “traditional” flavors. Apple and parsnip cake or olive oil and sea salt ice cream, anyone?
Craig Schoettler
Property Mixologist, Aria Resort & Casino, Las Vegas

As the first property mixologist for Aria, Schoettler has grabbed the chance to push the boundaries of modern cocktail-making practices. He’s got a great pedigree: before Aria, he was corporate beverage director for Menin Hotels and oversaw the Raffaelo Hotel in Chicago, where he transformed its Drumbar into a sophisticated speakeasy concept. He also converted the company’s Radio Bar in Miami into a high-volume, trendy hotspot for locals and tourists. Earlier he worked as executive chef at Grant Achatz’ The Aviary in Chicago, where he conceived and created two award-winning beverage programs featuring progressive cocktails and techniques.
Jeremie Tomczak
Executive Chef, King Bee, NYC

A Wisconsin native, Tomczak arrived in NYC 15 years ago and hooked with up some heavy hitters, including Laurent Tourendel at Cello, then Nils Noren and Marcus Samuelsson at Aquavit. In 2008 he left to take over as executive chef of event operations at the French Culinary Institute, where he worked with Samuelsson on a state dinner at the White House, and in 2010 he was a finalist for the U.S. Bocuse d’Or team. Four years ago he rejoined Samuelsson and Noren at the Red Rooster as chef de cuisine, creating a speakeasy menu for the supper club downsairs. At King Bee, which opened last fall, he introduced a menu of refined American dishes characterized by French technique and his signature precise, yet soulful approach.
Andrew Mace
Sous Chef, Le Pigeon, Portland

Serendipity brought Mace to Portland, but his early life set the stage for the present: He grew up in Montana in a family that smoked its own trout, picked wild asparagus and used every part of the deer they hunted. Armed with a BFA in digital design, he was en route to San Francisco and his car broke down in Portland. He never left. He learned how to cook under Jenn Louis’s tutelage at Lincoln Restaurant, then got a toe in the door at Le Pigeon, where he helped with prep once a week. Chef/owner Gabriel Rucker brought him on board in 2010, and last year named him sous chef. He and Le Pigeon Pastry Chef Nora Antene also run their own restaurant popup.

Chicago natives Rice (left) and Guzowski are raising the bar on the humble art of charcuterie at their new spot on Randolph Streeet. The pair met during a gig at Courtright’s Restaurant 12 years ago—by then Thomas was a seasoned pro, Guzowski was eager to learn and both knew they wanted to break out on their own at some point. That point came last April, when they took over a former meatpacking facility (karma, anyone?) and created Tête. They apply both Old World and haute cuisine techniques to composed dishes of terrines, pâtés, sausages and a la carte vegetable dishes. Their repertoire ranges from fromage de tete (aka head cheese) to German chicken weisswurst to Philippines-inspired longanisa sausage. Chicago Magazine called Tête “a carnivore’s paradise and more.” Indeed.
Erika Chou
Owner, Yunnan Kitchen, NYC

Chou’s mission is to convince New Yorkers that Chinese food means more than cheap delivery in little cardboard cartons. Chou worked her way up the ladder at Standard Grill and collaborated on several other restaurant projects before opening her first spot, Yunnan Kitchen, at the tender age of 27. There, she cooks the kind of food she grew up with: fresh vegetables, farm-raised local proteins, even salads. Two years later, she is poised to launch a second concept, Northern Tiger, a fast-casual approach to market-driven Chinese.
Steve McHugh
Chef/Owner, Cured, San Antonio

Set in the stunningly restored offices of a former brewery, Cured won the critics’ hearts in its first year, bringing praise from both Bon Appetit and Esquire. The former cited the restaurant’s “flat-out deliciousness” in naming it one of the top 50 new eateries. He honed his craft first at the Culinary Institute of America and later with some of the best in the business, including John Besh, ultimately landing a spot at Besh’s flagship August in New Orleans. He wound up opening Besh’s Luke, a German-style brasserie, in San Antonio. He was sidelined in 2010 with a cancer diagnosis (it’s now in remission), and the crisis propelled him to open his own restaurant. The name, Cured, is an intentional double entendre, referring to his state of health and the menu, which features house-cured meats and other house-made ingredients, such as bitters and pickles.

Gardner branched out from his nightlife roots to open two popular casual farm-to-table eateries, the Irish Whiskey Public House in Washington, DC, and the Copperwood Tavern in nearby Arlington, VA. This month he expects to complete openings of another trio in DC: Second State, on M Street; Orange Anchor, in Georgetown; and Union Social, on Florida Avenue. All share a seasonal American small bites menu featuring prime cuts of local game, farm-raised poultry, beef and fresh fish; and hearty, family-style sides. Every ingredient is sourced from local farmers within a three-hour drive.

Meat ice, jam cocktails and salted toasted sesame seeds aren’t found in many cocktail glasses, but perhaps they should be. At least that’s the thinking of Nakamura, bar manager for Bryan Voltaggio’s restaurants. Over the last decade he has honed a singular creative style that blurs the lines between the kitchen and the bar. He takes kitchen trimmings and tools such as an immersion circulator, cryovac and pressure cooker to process ingredients and create balance in his creations. Thus the meat ice, a concoction of tomato water, kitchen meat and produce trimmings and seasons, mixed with egg white and pig’s blood, frozen and added to Vegan Sacrifice, a cocktail containing Scotch, ginger and cayenne. House-made pineapple jam goes into a riff on the Margarita. And so on. His style has drawn a lot of attention from the local bar scene, for obvious reasons.
Jorel Pierce
Partner, Euclid Hall Bar & Kitchen; Chef de Cuisine/partner, Stoic & Genuine, Denver

Cooking exotic foods, hunting and foraging were all part of growing up in Colorado for Pierce, chef de cuisine at Denver’s Stoic & Genuine, an oyster house concept. He took his love of cooking to Johnson and Wales in Denver, and after graduation spent time in the kitchen at the celebrated Le Manoir aux Quat Saisons in Oxford, England, then back to Denver, at Willie G’s, before landing a job as a line cook at Jennifer Jasinski’s Rioja. He soon rose to sous chef, then Jasinski hand-picked him for her new concept, Euclid Hall. Westword named it “Best New Restaurant” and Pierce “Best New Chef,” and most recently Pierce was nominated for a James Beard rising star award. This year, Jasinski tapped the Top Chef 2012 alum to head up her latest concept, the oyster house Stoic & Genuine.

Raised on a family farm in Washington State, Nichols knows from fruit orchards and livestock pens. In 2003, he departed for NYC to attend the French Culinary Institute and ended up working for another local institution, Marc Murphy, at Landmarc Tribeca. He spent a bit of time exploring the world—Italy, Turks and Caicos, Australia—before circling back to NYC. There, Murphy hired him on as sous chef at Ditch Plains, then opening executive chef at the new Landmarc at the Time Warner Center. Soon after, he was promoted to executive chef of Benchmarc Restaurant Group. Recently, Gerber Group lured him away to help the company execute an ambitious expansion plan. 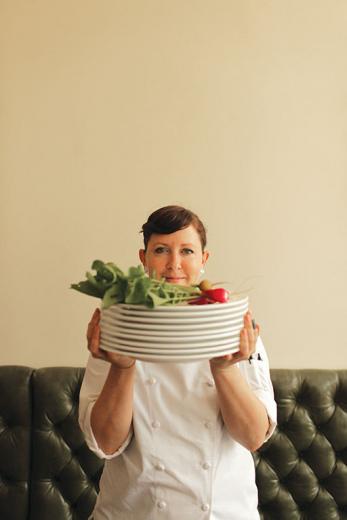 Next Up
Chefs on the Move: Alain Allegretti joins Fig & Olive and Eggslut’s founder is at Umami Burger
Start Slideshow ›