Top Chef alum Jacobson has honed his rustic-refined, hyper-local style at SoCal’s Girasol, but he’ll be spending a couple of months in the Midwest this year as the first chef-in-residence at Lettuce Entertain You Enterprises’ Intro, a new incubator for budding foodservice entrepreneurs. Jacobson and others who follow in his footsteps will create their own menu, style of service and vibe at the former L2O site in a series of popups designed to give chef-owner wannabes an idea of what it’s like to run a restaurant and to give prospective investors, business partners and patrons a sense for the chef.
Sophie Slesinger
Cheese specialist, Blue Duck Tavern, Washington DC

Slesinger has a degree in cultural anthropology but really found her calling while working for a cheese company and earning a reputation as a cheese whiz among chefs in NYC. She wound up consulting for Washington DC’s GCDC, a grilled cheese concept, and last fall was recruited to the Park Hyatt to head up a cheese program for the hotel’s Blue Duck Tavern and Lounge concepts.

Then-25-year-old Hunter Pond launched East Hampton Sandwich Co. in 2012 with the idea of offering a chic, affordable and handcrafted product. Classics like lobster rolls, fried chicken and Cubans are offered as sandwiches or salads at his fast-casual eateries. Pond has opened three units in the Dallas metro area, and seven more are expected to open over the next two years.
Ian Boden
Owner, The Shack, Staunton, VA

Celebrated for his work at Glass Haus Kitchen in Charlottesvile, Boden returned to the scene of his first restaurant, The Staunton Grocery, a two-hour drove from Washington DC, to create a dining destination with his latest project. The Shack’s humble surroundings—a mishmash of seating for 26 at seven tables—belie Boden’s ambitious menu.

Lin grew up in her family’s Detroit-area restaurant, where she learned the basics, and eventually she wound up cooking with the big boys, at Wolfgang Puck’s Spago Las Vegas, as part of the opening team at Ink, where she ended up as a sous chef, and most recently at Volt, in Frederick, MD, as a sous chef. At the moment she is one of the last chefs standing on this season’s Top Chef.
Ruben Torano
Pastry Chef, Joule Hotel, Dallas

Son of a pastry chef, Ruben Torano is known for his creative chops and broad baking repertoire. He supplies desserts for CBD Provisions, provides morning items for the Joule’s Weekend Coffee service, turns out banquet desserts and roomservice pastries and provides all the breads for the restaurants and hotel. He is fond of reinventing classics, such as the Sweet Corn Cake he created for CBD Provisions, a riff on tres leches cake featuring goat cheese and a sorghum syrup with goat’s milk.
Brian Vaughn
Chef/owner, Bistro CV, Low Restaurant, Yama, Steamboat Springs, CO

Vaughn likes to push the envelope with new spices and preparation methods, and he’s a bit of an equipment geek. All that converges at his just-opened concept, Yama, where he combines modern cooking methods with traditional binchotan ember finishing for bold interpretations of classic Japanese dishes.
George Chen
Founder and executive chef, China Live, San Francisco

Veteran restaurateur George Chen is the driving force behind China Live San Francisco, an interactive Chinese market-restaurant that some liken to Eataly in scope. Set to open this spring, it will present curated retail, a café and a variety of dining options prepared in exhibition kitchens. The second floor is reserved for Eight Tables by George Chen, and intimate fine dining eatery with a seasonal 12-course Chinese tasting menu.
Nora Antene
Pastry Chef, Le Pigeon, Portland, OR

Antene faces daily challenges to create desserts that stand up to chef Gabriel Rucker’s celebrated menu of edgy, highly original and recipe-free masterpieces. Before joining Le Pigeon in 2013, she was the pastry queen at Rucker’s Little Bird Bistro; during her stint the spot captured Oregonian Restaurant of the Year. She and boyfriend/Le Pigeon sous chef Andrew Mace also run their own popup dinner series.
Steven Dilley
Owner, Bufalina, Austin

A lack of experience didn’t stop Dilley from quitting his financial trading job in NYC, relocating to Austin, TX, and creating a restaurant concept. His Bufalina, opened last summer, serves Neapolitan pizza and natural wines to an enthusiastic following. He learned the art of Neapolitan pizza making at the source, in Naples, at Pizzeria Da Attilio. Given that Dilley is also a partner in a Santa Rosa, CA, winery, it’s no surprise that Bufalina is known for its unique and affordable wines as well.
David Barzelay
Chef/owner, Lazy Bear, San Francisco

The self-trained Barzelay started Lazy Bear as a series of dinner parties for friends, morphing it into an underground popup, serving tasting menus several nights a week for five years, before taking the plunge and opening in the city’s Mission District last fall. The party hasn’t stopped, though. Lazy Bear has an open kitchen that encourages interaction with guests, the 11-plus-course tasting menu changes constantly and the design is far from cookie cutter.
Robert Kronfli, Lior Hillel, Daniel Kronfli
Partners, Bacaro L.A., Bacari PDR and Nature’s Brew, L.A.

The Kronfli brothers and their partner, Hillel, are behind a growing and mixed portfolio of projects, including Bacaro, a fusion tapas and wine bar; Nature’s Brew, a coffee shop; a line of Kronfli Brothers natural sauces; and the recently opened Bacari, an Italian small plates concept. Their winning formula: engage guests’ palates with unconventional food, wine and beer; and create an escape where guests can have fun, socialize and forget about the stress in their lives.
Wesley Johnson
Chef, Café Castagna, Portland, OR

Johnson was brought on board to help push the menu at Café Castagna beyond its western Mediterranean roots into bolder tastes from the likes of Cyprus, Turkey, Morocco, Israel, Lebanon and Greece. Mentored by Philadelphia’s Michael Solomonov, he shares Castagna executive chef Justin Woodward’s passion for vegetable-driven cuisine, wild foraging and root-to-leaf utilization. 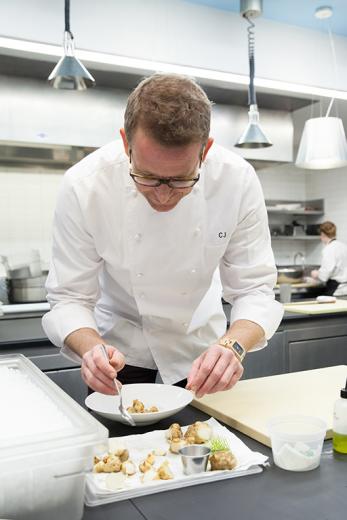