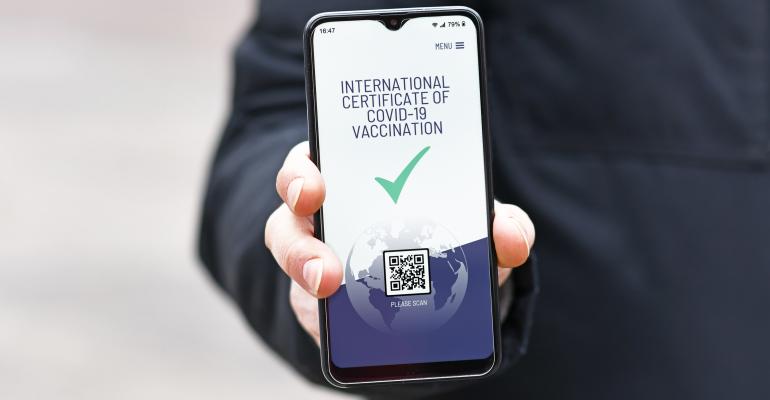 Firn / iStock / Getty Images Plus
To dine indoors, guests aged 12 and older must show their vaccine card, or use the NYC COVID Safe app, or the state’s Excelsior app.
Operations

Restaurant workers and guests who hope to dine indoors in New York City will have to show proof of at least one dose of a coronavirus vaccine, starting Aug. 16 — though enforcement won’t begin until Sept. 13, city officials announced Tuesday.

Following similar moves in France and Italy, New York City Mayor Bill de Blasio said the “Key to NYC Pass” mandate is designed to pressure more people to get vaccinated as the case count grows from the spread of the Delta variant. The vax-for-entry mandate also applies to gyms, movies and other forms of entertainment that involve crowds.

“It’s time to see vaccination as literally necessary to living a good and full and healthy life,” De Blasio said in a press conference. “We know this will encourage a lot more vaccination, we’ve seen it already. The goal here is to convince everyone that this is the time to stop the Delta variant.”

De Blasio said a mayoral executive order and health commissioner order is coming with more detail. The mandate will be phased in with inspections and enforcement beginning Sept. 13. The mayor also added a $100 incentive to encourage more residents to get the shots.

To dine indoors, guests aged 12 and older must show their vaccine card, or use the NYC COVID Safe app, or the state’s Excelsior app.

“Not everyone’s going to agree with this, I understand that,” De Blasio said. “But for some people, this will be a lifesaving act.”

Joining the mayor at the press conference was Tren’ness Woods-Black, whose family has operated the famed Sylvia’s restaurant in Harlem for three generations.

The mayor, however, did not require mask wearing indoors, mandates that are back in Los Angeles and the San Francisco Bay Area, Washington, D.C., and states like Louisiana.

Andrew Rigie, executive director of the NYC Hospitality Alliance, said in a statement that New York City’s vaccine requirements will be a difficult step, “but ultimately may prove an essential move to protecting public health and ensuring that New York City does not revert to restrictions and shut-down orders that would again absolutely devastate small businesses that have not yet recovered from the pandemic.”

Larry Lynch, senior vice president of science and industry for the National Restaurant Association, also expressed support for the move, saying higher vaccination rates are our best bet for containing the spread of COVID.

But Lynch urged the city to offer training and clear guidance to businesses that now will be faced with the challenge of screening customers.

“Checking vaccination status isn’t like ID-ing a customer before serving them a drink — staff receive training on how to do that,” Lynch said in a statement. “Now, without training, our staff members are expected to check the vaccine status of every customer wanting to eat inside the establishment,” he added. “Last year when mask mandates across the country were put in place, restaurant workers suffered terrifying backlash when enforcing those rules.”

The association’s ServSafe program developed a conflict-de-escalating module to train workers to deal with that push back.

“We hope that the city will take this into consideration and will work with us to ensure there is clear guidance and support for our workforce,” Lynch said.