Danny Bowien’s Michelin-starred restaurant on the Lower East Side of Manhattan officially closed for business on Sept. 30, according to an Instagram post.

“We faced the difficult decision as a business to battle through adversity in hopes of outside support we know may not come, or to create a business model that forges a new path for survival on our terms. We at Mission are choosing the new path,” Bowien wrote.

The Bushwick, Brooklyn outpost of Mission will remain open and shift to “take out, pre-packaged meals and new models of distribution” the post said.

What was just a temporary closure to fix damaged floors eventually led to the complete closure of this Newport Beach restaurant after more than eight years in business. On Sept. 3, the restaurant temporarily closed to repair floors, but, on Sept. 7, the Orange County Register reports, co-owner John Hughes posted that the restaurant was closing on his personal Facebook page.

“It’s official! Juliette Kitchen + Bar is permanently closed after 8.5 years! COVID-19 is the winner! Thank you to everyone who brought memories to last!”

Hughes told the OC Register he attempted to negotiate with the restaurant’s landlord but ultimately could not lower the amount he owed.

The 37-year-old restaurant in California has officially closed down, an e-mail from a spokesperson confirmed.

“[Paradise Café] enjoyed a long and well-deserved run as a neighborhood watering hole, a place for celebrations, date night headquarters, and as the best patio in downtown,” said a statement from ownership group Acme Hospitality, which owns several concepts in Santa Barbara, including The Lark, Loquita and Lucky Penny.

Officials teased a “new concept” would be coming to the space in their goodbye email.

A group of investors opened this “cheap steak” restaurants in 1963 before it was eventually bought by longtime manager Herman Muncic, who then passed it on to his son upon his death in 2018. However, the restaurant announced its permanent closure on Facebook, ahead of the Labor Day weekend.

“It’s been our honor and privilege to serve and employ our spectacular city’s citizens. From the corner of Randolph and State to Clark and Lake and all the locations in between, Ronny’s has stood as a beacon welcoming all of Chicago, and those from around the globe, into our dining room and family. For this, we will be eternally grateful.”

The post adds: “We won’t say ‘goodbye’ but rather ‘until we meet again.’

Top Young Hospitality Group, the restaurant group led by Chef Brad Greenhill and developer Philip Kafka that includes Takoi and Magnet, has officially dissolved due to “the financial strains of the pandemic,” Greenhill said in a statement. Greenhill will become the sole owner of Takoi and Magnet will close indefinitely.

Magnet was open less than a year.

In a statement to Eater, Greenhill wrote that he no longer believes in restaurant groups and that “restaurants should be restaurants, not companies.”

The Central Ohio restaurant is officially closed after almost 40 years in business. In fall 2019, it was purchased by Tim Rollins’ CityBrands from chef Hubert Seifert but ultimately couldn’t survive COVID dining restrictions.

“To not reopen the restaurant was a really tough decision,” Rollins told Columbus Business First. “After the purchase late last year, renovations to refresh the restaurant were underway but only about halfway complete when the COVID crisis closed all restaurants.”

The groups other restaurants have reopened post-COVID shutdowns with the exception of The Wine Bistro in Worthington, Ohio.

The acclaimed concept Acorn, operating in Source Market Hall, has officially closed, according to its Instagram. However, the owner still occupies the space and is planning to reconcept.

"The uncertainty this pandemic brings has forced us into making incredibly difficult decisions. I am heartbroken to announce that we will be permanently closing Acorn at the Source today — while Melted [a dessert shop in the same food hall] will close temporarily,” wrote owner Bryan Dayton.

Dayton said he plans to take “the next 6 to 8 weeks to re-evaluate and re-conceptualize. Our plan is to open a new concept in the Acorn space by the end of October.”

Bubby’s Tribeca, which was renovated last year, is still open. 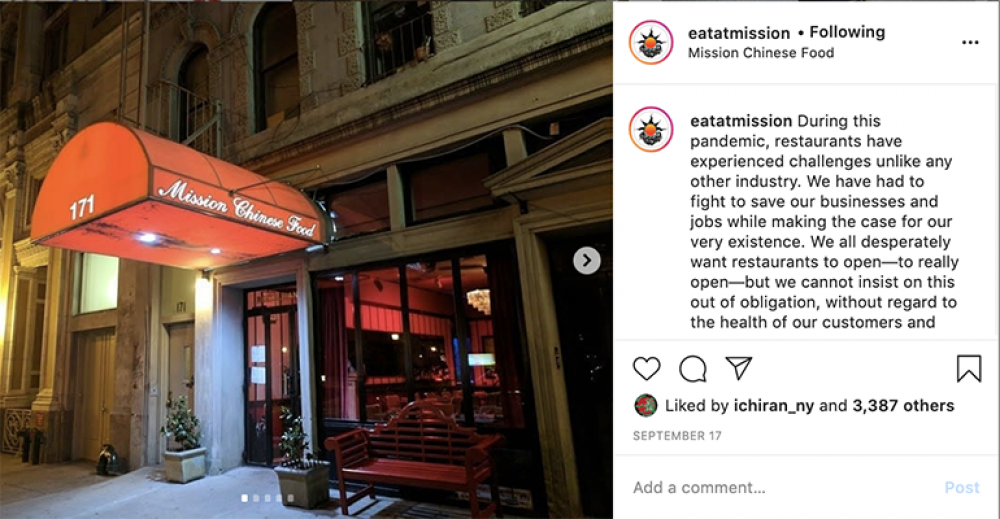