The fast-casual eatery is named for a stuffed sandwich pocket popular in Rome and inspired by traditional pastas. It was created in 2012 by Stefano Callegari, a pizzaiolo who operates seven locations of the Trapizzino concept in Rome, along with three pizzerias there called Sforno, Tonda and Sbanco. Slow Food Guide named him one of the ten masters of Italian pizza.

Nick Hatsatouris, co-founder of Moby’s in East Hampton and owner of Eveleigh in Los Angeles, partnered with Luca Vincenzini, a former TV producer from Rome, to bring the concept to the U.S. Although there are no current plans to franchise Trapizzino, the two plan to work together on future projects.

Here’s a closer look at Trapizzino.

A trapizzino starts with the bread. Eleventh generation yeast from the Puglia region of Italy, which Callegari brought to the U.S. in jars, is mixed with proprietary blend of durum flour stone-milled in Italy. “This food has a story. It tells you about Rome and about Italy,” said Callegari.

The leavened dough is then baked separately and paired with any of 16 filling combinations, eight of which are available daily for $6.50 each.

Three popular trapizzino fillings from left to right: oxtail (coda alla vaccinara), chicken (pollo alla cacciatora), and eggplant (parmigiana di melanzane). The Italian ritual of “fare la scarpetta” also applies. Translation: when the bit of sauce on your plate is too good to waste, you “make a little shoe” of your bread to mop it up.

“In Italy, food is a big deal. It’s like a religion. When we’re eating lunch, we’re thinking about dinnertime,” Callegari said.

From start to finish, the entire process of creating a batch of trapizzini takes 50 hours. Callegari’s plan was to bring age-old flavors to a new generation as an affordable snack food.

“I think what’s exciting about Trapizzino is that we’re offering extremely well-sourced Italian food at a very reasonable price,” said co-owner Hatsatouris. “We’re telling the story of Roman cuisine, food with a great history and sense of tradition, in a way that’s accessible.”

A surprising favorite is the trippa alla romana, a pocket stuffed with honeycomb tripe, tomato, pecorino romano, and mint. Another adventurous stuffing combines veal tongue with olives and parsley.

Said Callegari, “It’s a new shape, but an old cuisine.”

Keeping its U.S. menu exactly the same as the Roman menu, Trapizzino also serve suppli, a traditional Italian snack of a risotto ball filled and fried, for about $3.50 each. The restaurant also serves Italian beer and wine, along with Lurisian sodas and water. 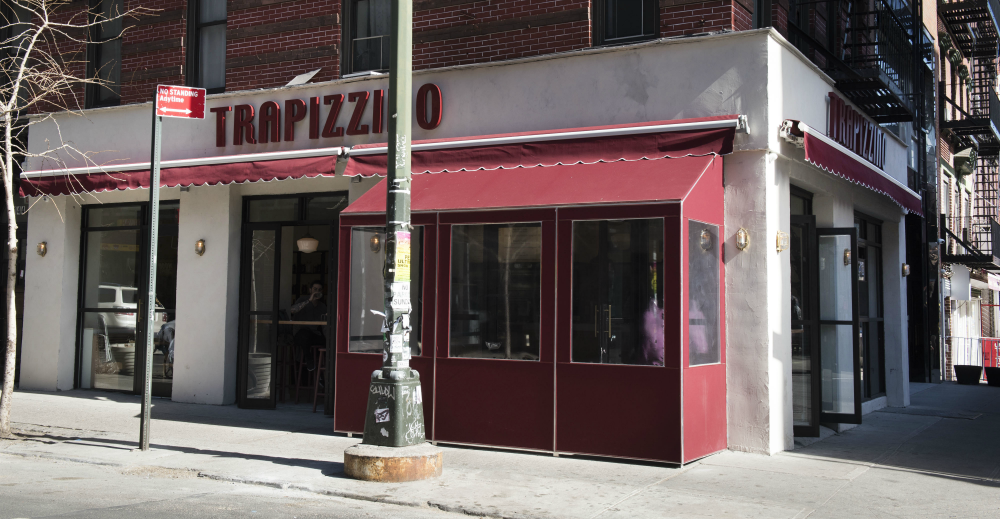