Iron Chef, cohost of ABC's The Chew and Cleveland native Michael Symon’s latest project, Mabel’s BBQ, is a love letter to the suburban cookouts of his youth. At the recently opened Mabel’s, he’s packaged Cleveland-style BBQ with an interior created by Richardson Design that captures the backyard barbecue experience.

“There was a time when every party didn’t have to be Pinterest-worthy,” says Scott Richardson, founder and lead designer. “Instead, you were invited to cookouts. It was a very Cleveland way of life. You could expect someone’s garage to be converted into the center of the party, folding chairs to be thrown out on the driveway and the grill to be fired up for ribs, chicken, brisket, sausages—you name it.”

The Symon team, which includes Michael, his wife Liz and their business partner Doug Petkovic, also wanted to celebrate the city’s grit and ethnicity. With Richardson’s help, they accomplished that. Take a look.

A salvaged workbench, now a hostess station, is the first point of contact for guests entering Mabel’s. It anchors an industrial leather rolling door, a stylistic nod to Symon’s fondness for motorcycles.

The menu is prominently displayed over the bar in acrylic characters set on a track. It’s meant to evoke a gas station sign that might be salvaged for nostalgia and hung in a garage.

Stick to your ribs
Mabel's BBQ

Where the action is
Mark Steele Photography

A massive communal picnic table sits at the center of Mabel's. Folding chairs inspired by the Industrial Era were produced by an Ohio furniture company.

Modeled on an overscaled retro green Coleman cooler, the bar serves a healthy variety of craft beers, whiskeys and moonshine.

This $13 handful of a sandwich piles coleslaw on a choice of kielbasa or chopped pork on a roll.

Industrially reinterpreted lighting strategically frames a photo of Symon and his family from back in the day.

View from above
Mark Steele Photography

A half pound of brisket smoked over local fruitwood runs $13.

The picnic atmosphere spills over to the restaurant’s front patio, which is located on a popular pedestrian mall a few doors down from Symon’s upscale Lola. 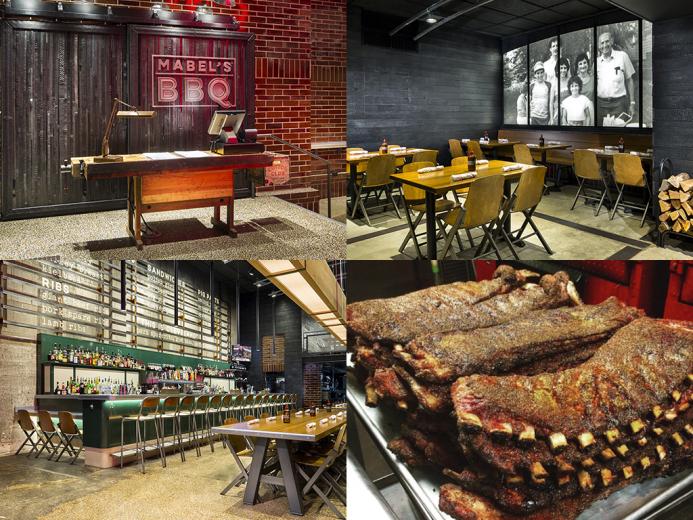