On March 17, Glo Noodle House opened in Denver, bringing globally-inspired Asian food to the Berkeley neighborhood. It’s owned by a husband-and-wife team, Chris and Ariana Teigland. Chris runs the kitchen while Ariana rules the front of house. The pair met as chefs while working at Blackbelly in Boulder, and now together manage and cook for around 45 seats in their new spot. The name Glo pays homage to Chris' mother Gloria, a pastry chef who went by the nickname Glo and inspired him to cook.

The food at Glo is a hodgepodge of Asian staples including ramen, sake and raw fish. But the Teiglands wouldn't say the fare is traditional by any means. Expect lemon chicken ramen, hamachi with grapes, and bok choy with Marcona almonds. Drinks include a list of sake as well as wines, local beer and craft

cocktails mixed with ingredients such as green peppercorn, fresh shiso and serrano peppers. On the sweet side there's panna cotta laced with lemongrass, and the green tea and yuzu sponge cake, which, said the chef, reminds him of his mother the most.

The city of Pueblo has come to Denver in the guise of Fuel & Iron, which opened in LoDo on April 28 in the former Brass Tacks location. The high ceilings, exposed pipes and rough wooden bar and booths work well with the industrial theme of the bar and restaurant. Diners can also check out the historical photos lining the walls and the giant mural of Pueblo's steelworkers.

The theme and name pay homage to Colorado Fuel & Iron, a large steel conglomerate based out of Pueblo that played a major role in the industrialization of the West. This spot is the first brick-and-mortar operation by Fuel & Iron Realty, which plans to bring Fuel & Iron Food Hall to downtown Pueblo in fall 2022.

Where the name and decor tip a hat to Pueblo, so does the food. Green chile is a Pueblo staple, and on the menu it's found in the Pueblo poutine, Pueblo cubano and the green chile slopper (an open-faced burger smothered in green chile). It's also in the drinks. The Puebloma and the Thunderwolf Margarita both incorporate green chile-infused tequila within the concoction.

The culinary director Mo Montgomery hails from Pueblo, and on the menu she has added cured meats from Gagliano’s Italian Market & Deli, a century-old Pueblo staple. Cheese comes from Springside Cheese Shop in Pueblo, the green chile is grown at Milberger Farms just outside the city, and most of the produce comes from farms in and around the Pueblo-area.

Lakewood just got a cool dose of sweetness thanks to Ice Cream Farm, run by the GQue Championship BBQ team. The spot opened March 29, and is the second location of the dessert spot, as well as the fourth location of GQue BBQ, both in the Belmar complex in Lakewood. On the savory side guests will find a fast-causal eatery that seats around 50, with simple wooden tables and a laidback feel to the space. Everything can be taken to go, or eaten right there off the metal trays or lined baskets.

Award-winning pit master Jason Ganahl opened his first GQue BBQ in November, 2015. He decided to go toward the restaurant business after winning numerous barbecue competitions across the states.

The concept is fast-casual, but the cooking process is low and slow. All the meats are smoked over hickory wood and include brisket, pork spare ribs, chicken wings, sausage and turkey. Sides can be added to platters, such as pit-smoked beans, salt-brined fries, onion rings, mashed potatoes, apple slaw and more. The menu also features giant sandwiches. On the ice cream side, it's all made fresh with local milk in flavors including banana pudding, salted caramel Oreo, cotton candy and bourbon butterscotch.

Lakewood has a new Italian spot complete with checkered table clothes and a stand-alone salad bar thanks to chef Alex Seidel. Unlike his first spot Fruition, or Mercantile Dining and Provisions downtown, Roca's is all about easy, casual Italian food, in an easy, casual setting.

Alex Seidel won a James Beard Award for Best Chef Southwest in 2018. He opened the fine dining spot Fruition in February 2005, and Mercantile Dining & Provisions in mid-2014. He also bought Fruition Farms Creamery in 2009, making his own cheese for the restaurants. Over the pandemic he sold the farm, but still works to source great ingredients and offer guests transparency when it comes to their meal.

Roca's pays homage to his upbringing in Racine, Wis., and the pizzas chef Seidel remembers from childhood. But it's not just thin-crust pies guests can order. The menu reads like a classic Italian food joint, with eggplant Parmesan, spaghetti with clams, arancini, Caesar salad and tiramisu. Most entrees stay in the $16 range, with appetizers and salads around $11. The pasta is made fresh, and like Seidel's other establishments, Roca's uses well-sourced ingredients.

After years wanting her own French-style bakery, chef Thoa Nguyen has launched Banh & Butter Bakery Cafe in Denver’s Colfax arts district. But, while she showcases her skill and love for Parisian pastry, Nguyen also added an Asian twist to the creations.

Expect to find an array of classic pastry such as croissants, cakes and Madeleines, but also baked goods with a dose of Nguyen's Vietnamese heritage and other Asian influences. This includes mochi cupcakes with coconut and pandan, an herbaceous tropical plant from Southeast Asia. Bright purple ube mille-crepe cakes. And the muffin-meets-croissant hybrid called a "cruffin" laced with matcha.

Michelin-starred chef Tetsuya Wakuda has launched his first state-side spot in the Palazzo Tower of The Venetian. The opening comes thanks to the Miami-based multiconcept operator 50 Eggs Hospitality Group. The chef is known for his restaurants Waku Ghin, in Singapore, and Tetsuya’s, in Sydney, Australia. The latest spot finally gets his signature by way of his actual name, Wakunda. With around 300 seats, the venue include a lounge area, patio and separate omakase room.

Though it's off the main strip, there's a lot of hype surrounding chef Rob Moore's new Italian-American joint, Rosa Ristorante, which opened on April 27.  For over 30 years Moore has cut his chops at many notable restaurants, including his most recent stint at Prime Steakhouse by Jean-Georges, where he was the executive chef.

Wander out of the desert sun and into the comforting embrace of Rosa Ristorante's dark wood and exposed brick walls. The wood-topped tables mirror the heaviness of the decor, though art by local mother and daughter team, Doris Paessler Martinez and Cerissa Lopez, add a spark of color and life to the space. There's also a large patio for more a more airy dining experience. 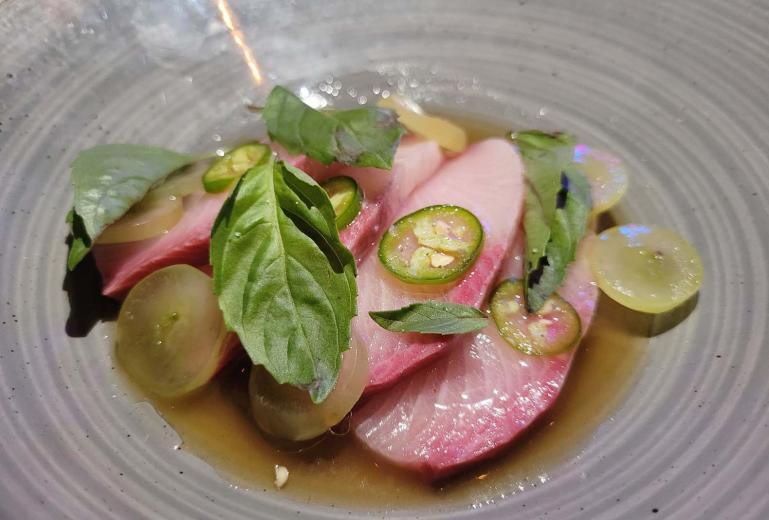