Leña is a Spanish grill-focused restaurant featuring live-fire cooking of Spanish meats and steaks, and Mar is a seafood restaurant featuring both Spanish and American-style seafood dishes. While Mar has a more intimate, upscale atmosphere, Leña is more relaxed, inspired by the steakhouses of Basque Country and Asturias.

This 45-seat seafood restaurant features multiple dishes from different regions of coastal Spain, including a Galician-style grilled octopus and Catalan seafood stew, as well as some nods to classic seafood tapas like shrimp sautéed in garlic. Oddly enough, the famous Spanish seafood dish paella does not make an appearance on the menu, though it can be found elsewhere inside Mercado Little Spain.

Leña is named for the Spanish word for wood and indeed everything is cooked over wood, with meat-focused grilled fare like suckling pig, lambchops, quail, and seafood selections. Diners are seated in an 80-seat dining room and can observe the grilling action through an open kitchen format.

"Along with most good ideas, the inspiration came from the bottom of a fourth glass of rosé,” chef Farmerie quipped about the new restaurant.

The petite 540-square-foot restaurant’s seafood menu is accompanied by its extensive rosé platform featuring 20 varieties, as well as rosé cocktails, and a seasonal frosé.

The seafood-focused menu features different shareable small plates like Hamachi crudo with pickled rhubarb and green strawberries; salmon tartare with avocado, cucumber, and roe; and uni on an English muffin with chives and lemon for an average price of $12 per plate.

The large plates intended for two to three people include Guinness and five spice-braised short rib with steamed bao buns and whole boneless fish for an average price of $40 per entrée.

Chef Stephanie Izard’s (Girl and the Goat) first South American restaurant in Chicago opened on April 4, featuring Peruvian-inspired cuisine, including a ceviche menu, empanadas, a selection of hot and cold snacks, as well as a wide variety of entrees from land and sea. Cabra is Spanish for goat, and is an apt name since other concepts in her culinary portfolio feature various iterations of the word goat.

The space of the rooftop restaurant itself is bright and nature-inspired, featuring hanging greenery and jade-green accents, and is located inside Fulton Market.

This is Chef Izard’s fourth restaurant in Chicago.

The widely varied menu at Cabra features chef Izard’s own spins on Peruvian classics (she traveled to Peru earlier this year for field research), including  a ceviche menu featuring classics like shrimp ceviche with avocado and sweet potato for $16, and unique iterations like duck ceviche with crispy quinoa, pickled mangoes and cucumber with salsa criolla for $15.

For the more adventurous eaters, Izard even offers beef heart anticuchos (Pervuian street food) for $13, as well as larger plates for an average price of $24, including pork shank and whole snapper served with bacon and sweet and sour sauce.

Led by chef Wilcomb, the restaurant’s classic Italian menu was inspired by and is named after her grandmother, Gianna.

The 6,000-square-foot restaurant also features a chef’s tasting menu called “Feed Me” for $50 per person (plus $25 for a wine pairing), which allows the chef to choose an antipasto, salad, paste, entrée, and sides that would not necessarily be on the menu.

The drinks menu includes an extensive wine menu by the glass, and an original Italian cocktail menu with aperitifs and other Italian ingredients for an average price of $12 per cocktail.

Bobby Flay’s latest restaurant opened April 5 at the Palms in Las Vegas. Featuring a Latin-inspired seafood menu, the restaurant is the Iron Chef’s first to include a sushi menu, overseen by in-house sushi chef Kiyo Asano.

The menu — influenced by South American, Mexican, and Mediterranean cuisine — is mainly made up of shareable plates including lobster, ceviche, sashimi, and larger entrees.

The beverage program includes cocktails to complement the diverse seafood fare, including tequila and pisco-based drinks, and an extensive wine and beer selection.

“At Shark, I’ll be pushing the envelope even further, working with new styles of chiles that I’ve discovered over the last few years,” Flay said in a statement.

Although no shark meat appears on the menu, Flay’s menu selections at Shark include a seafood tacos, ceviche and unique sushi rolls with octopus, salmon roe and squid for an average price of $16 per roll.

Shareable plates go for an average price of $20, while larger entrees average $38.

From the people behind the much-lauded Brooklyn restaurant Olmstead, comes a new 50-seat French yakitori restaurant in Prospect Heights, Brooklyn that opened at the end of April. Chef Greg Baxtrom combines classical French cuisine in a yakitori small plates format in an atmosphere that feels like a classic French bistro with whimsical décor like a neon “Oui chef” sign next to the kitchen and an indoor mushroom greenhouse.

The entire menu is made of small plates for under $10, featuring classic French dishes with Japanese influence and style, and a good portion of the menu focuses on meat skewers. The bar features 16 cocktails on tap, as well as an extensive wine and sake selection.

Guests can sit indoors or on the outside, year-round patio built by Chef Baxtrom’s father.

The ‘Yakitori’ section features skewers of vegetables, poultry, meat and seafood, including chicken breast with sauce Allemande; duck meatballs à l’orange with tare sauce; scallops with sauce Maltaise; and tuna Niçoise all for under $10 per plate. 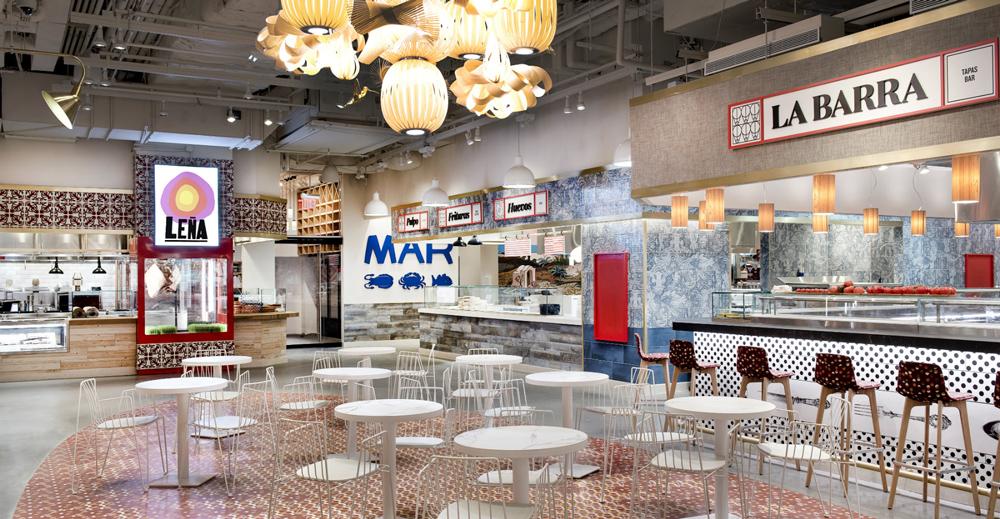