A succulent source of naturally lean protein, lobster is delicious whether it’s steamed, grilled or broiled.

Typical menu offerings, outside of whole lobsters, usually include rolls, chowder, salads and ravioli, but we’ve noticed an uptick in the number of creative lobster concoctions as of late. So, we asked 19 chefs to share their favorite lobster creations.

“The idea behind the One Pound Lobster Baked Potato with Cognac Lobster Sauce was to combine ingredients that everyone loves in a comforting way,” says Julia Doyne, executive chef at The Forge Restaurant and Wine Bar, Miami Beach. “You have lobster, potato, lobster bisque, bread crumbs, and of course, pickled red onions. What's not to love?"

Growing up in Maryland, executive chef and owner Mike Price at New York City’s The Clam recalls working in a restaurant where a favorite dish was lobster tail stuffed with crab imperial. In his Stuffed Lobster he takes this concept to a new level by stuffing the lobster cavity with Peekytoe crab and a medley of mushrooms. “I finish it with a drizzle of sherry because growing up I loved eating cream of crab soup with a drizzle of dry sherry,” he says.

At Oak + Rowan, slated to open in Boston this fall, “we love to play around with contemporary surf and turf ideas,” says executive chef Justin Shoults. “The combination works perfectly with the sweet, buttery flavor and tender, slightly firm texture of poached lobster, and the savory, delicate flavor and crispy outside and creamy inside of the veal sweetbreads. We use different berries or fruits throughout the seasons to add a sweet acid component to bring out the lobster and sweetbreads flavor. The dish is a harmonious union of two luxurious animals from two completely separate habitats."

Lobster Rolls have been trending throughout the country lately, and it really shifted my perspective about how I can combine my love of seafood and ramen to create something new and different,” says Tomonori Takahashi, c.e.o. and founder of Jinya Ramen Bar in Los Angeles. “The Lobster Me Happy combines pork broth, lobster sauce, lobster and shrimp wonton, Brussels sprouts, green onion, egg, and thick noodles.”

“Aura’s lobster benedict has really evolved over time,” says Richard Rayment, chef at the Boston restaurant. “When we first started offering an alternative to eggs benedict at breakfast, we used salmon. Then the recipe changed to crab benedict and now, given how guests often associate Boston and New England with lobster, it’s lobster benedict. It’s become a guest favorite.”

At Temazcal Tequila Cantina in Boston and Lynnfield, Mass., “our lobster mac poblano is a delicious comfort food for fall,” says corporate executive chef Sean McDonald. “We use Campanelle pasta, which works perfectly to capture the fresh cheese sauce we make in house. “The addition of garlic, onions, red peppers and a little poblano pepper spices it up.”

By combining lobster with classic steak sides, such as mashed potatoes, executive chef Jose Melendez at BOA in West Hollywood, Calif., takes “Surf and Turf” to a whole new level.

“Our lobster sushi has been on the menu twice,” says Robert Tobin chef at Tamo Bistro + Bar, Boston. “When we first put it on the menu, it was a straightforward lobster sushi. Guests enjoyed it, but we knew that we wanted to change the recipe if we brought it back. The current lobster sushi incorporates cantaloupe and chili oil, which is a nice variation, offering a sweet but spicy taste.”

Lolita Cocina & Tequila Bar in Boston’s guacamole especial “is an original Lolita take on a popular Mexican dish, which goes back to the conception of the restaurant before I joined in 2014,” says executive chef Nicholas Cox. “Our guacamole is topped with fresh lobster and crab and is accentuated by garlic herb butter, an overt nod to New England cuisine.”

“The Lobster Pop Tarts pay homage to a childhood favorite, and emotes those feelings of being a kid again,” says executive chef Attila Bollok at Barton G in Los Angeles. “But contrary to the standard breakfast pastry, you're getting luxuriously tender Maine lobster that's been poached in an aromatic broth, an intensely flavored lobster bechamel sauce and gruyere cheese folded in a crispy, almost airy tart, with a pair of expertly crafted dipping sauces.”

“Our lobster donut is made with waffle batter and fried lobster claws, caramelized cream corn, strawberry chipotle rhubarb chutney, and sweet chili sauce,” says Matt Bailey, owner of Elm City Social in New Haven, Conn. “It plays off the sweetness in the lobster claw and the waffle batter, balanced with the spice of the chutney and chili sauce. We just launched this recently and it's been a huge hit with our guests.”

Chef Michael Cimarusti has put a spin on the classic Southern “Biscuits and Gravy” at Connie & Ted’s in West Hollywood, Calif., with the addition of Maine lobster, sunny side up eggs, house-made buttermilk biscuits and lobster gravy.

“I grew up in the Boston area and lobster is one of my absolute favorite things to eat and cook with,” says Taryn Bonnefoi, executive chef at The Hourly Oyster House in Cambridge, Mass. “I wanted to accentuate the natural sweetness of the lobster so I kept the stuffing ingredients simple and straightforward with a basic cornbread filling, some celery, onion, butter and a little lemon juice. Using cornbread filling instead of a more-traditional bread stuffing gives the dish a bit of a New England flair.”

These lobster BLT steamed buns are a spin on the classic lobster roll, topped with Old Bay aioli, candied bacon and jalapeño. “This is a lobster roll seen through the Fabrick of New York,” says Michael Franey, executive chef at the David Burke restaurant. “Chinese style Bao buns, steamed, and filled with the most American of fillings.”

The Clobster Grilled Cheese at Slapfish in Los Angeles is half crab, half lobster, cabbage, and awesome sauce, according to the menu. Chef Andrew Gruel says, “Given the strength and complexity of the grilled cheese inside this sandwich, we wanted to give the lobster a stronger backbone by adding some naturally sweeter crabmeat to round out the sandwich. We use a spicier acidic sauce to make it all pop.”

At Crave Fishbar in New York City, executive chef and partner Todd Mitgang integrates lobster with Chu Chee curry, charred red onion, Japanese eggplant, Thai apple eggplant and fresh bamboo shoots in his Lobster Curry. “When we were opening the restaurant, I met with friend and food writer Sylvie Bigar,” says Mitgang. “Vong had just closed and Sylvie was telling me how good their lobster with curry was. I had never tasted Vong’s version, but I was well versed in Thai curries. I remember thanking her for the idea and told her I would attempt a version. That was over four years ago. It has been on our menu from our first day of service and it’s still a crowd favorite.” 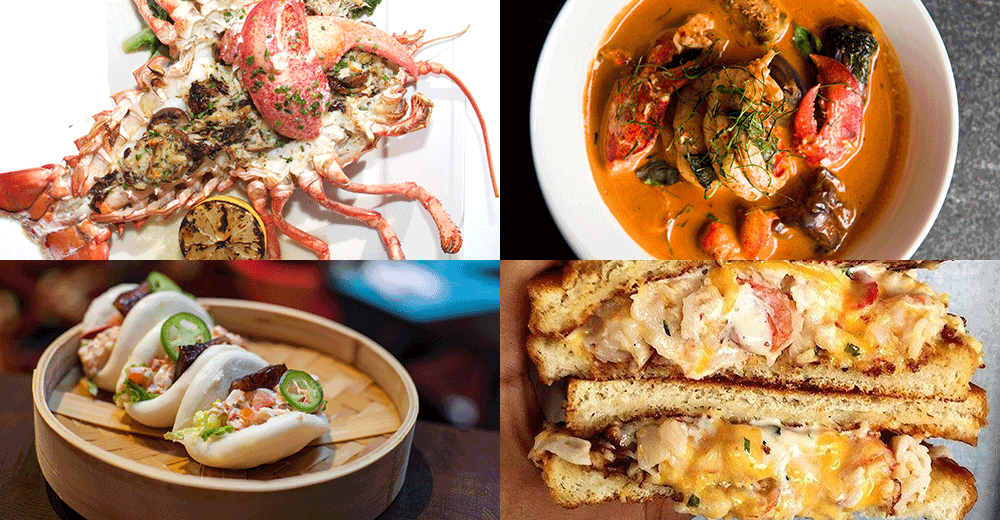 Next Up
Flavor of the Week: Ramps — the wild onions of springtime
Start Slideshow ›